The bones of the human skull, information on the functions, structure and anatomy of skull. 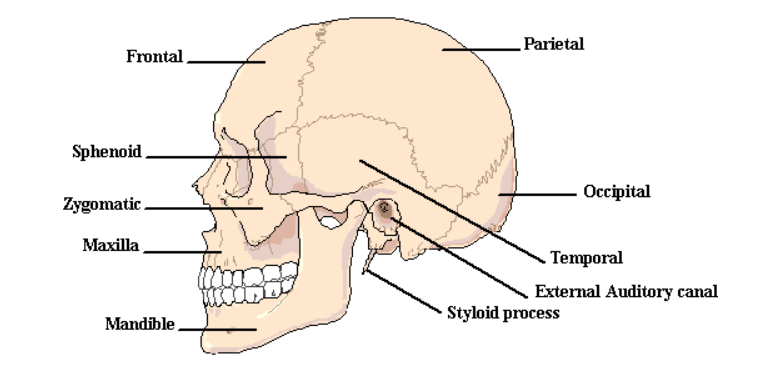 The bony or cartilaginous skeletal framework of the head of vertebrates. Technically, it is defined as the cranium, the protective covering of the brain, plus the upper jaw. The lower jaw, or mandible, and the hyoid process, the structure supporting the tongue and pharynx, are considered separate entities.

The cranium protects the brain and sensory organs and serves as a base for the anchorage of the upper jaw. The lower jaw articulates with this unit, which alsa serves for the attachment of the muscles operating the lower jaw. These two functions of the cranium-protection and jaw movement-affect the form of the entire skull in various ways. Generally, the adaptations for feeding seem to have the strongest effect on the head skeleton. But large eyes, rotated so as to look forward (stereoscopic vision), also have played a part in modeling the human skull, as has the increased relative size of the cerebrum part of the human brain.

Skull structure varies greatly among the vertebrates, as can be suggested by a brief com parison of the head skeleton of the shark (a cartilaginous fish) with that of man. The shark skull has no bones, while the adult human skull has no cartilage and is composed entirely of bone. The skull of the shark has a prominent branchial or gill basket, while in man only remnants of this are seen in the hyoid process. The skull of a bony fish, such as a perch, is midway between that of a shark and that of man in that it contains many cartilaginous elements comparable to those of the shark and alsa many bones comparable to those of the human skull.

The human skull is composed of 22 bones-8 cranial bones and 14 facial bones. In general, the skull is dome-shaped with the frontal bone over the forehead, the parietal bones at the top and upper sides, the temporal and sphenoid at the lower sides, and the occipital at the back. In infants and very smail children, the bones of the cranium are not fused but are held together by connective tissue strips, calIed sutures. In certain sites, the sutures are particularly wide and the intervening areas, called fontanels, are soft and weak. As a child matures the sutures fuse, and the connective tissue is replaced by hard bone.

The skull is composed of both dermal and chrondral bones.

Dermal bones arise in the skin or lining of the mouth and pharynx. The yare presumed to have arisen in the course of evolution from the scales covering the body and from the teeth lining the mouth and pharynx. Chrondral bones, on the other hand, had a cartilaginous precursor and arose in evolution from the connective tissue enclosing the brain and sensory organs, such as the nasal sacs, eyes, and inner, ears, or from the arches supporting the pharyngeal walls and mouth. This connective tissue first became cartilaginous, then was calcified and covered with bones, and still later was replaced entirely by bone that contained marrow.

At any one stage in its development the skull can be viewed as a fixed structure composed of specific bones and serving specific functions. From a developmental viewpoint, however, the skull is a changing structure developing in response to metabolic event s or physical stresses and strains and serving different specific functions at different stages of development. The development of the head skeleton of the frog illustrates this point. The tadpole has a cartilaginous chrondrocranium that has special mouthparts for the support of rasping, keratinized teeth that the tadpole uses in feeding on algae. On the other hand, the adult frog has bony jaws with teeth that the frog uses in feeding on small animal matter, the larval mouthparts having been lost during the process of metamorphosis.