Where is Padua? Information about the art, history and architecture in Padua. The famous places to go and see in Padua.

Padua is rich in architectural, pictorial, and sculptural works of art, created by such masters as Andrea Mantegna, born near Padua, Giotto, and Donatello. The latter worked in Padua from 1444 to 1453. In the center of the city are two squares, Piazza delle Erbe (vegetable market) and Piazza delle Frutta (fruit market) both surrounded by ancient houses and palaces. Between the squares stand the municipal palace (16th century) and the handsome quadrangular Palazzo della Ragione (1218-1219, later enlarged), locally called II Salone (the hall), because its interior is entirely occupied by an enormous hall, once the meeting place of the government of the commune. Its walls are covered with about 400 frescoes, mostly of the 15th century. Nearby is the palace housing the university. 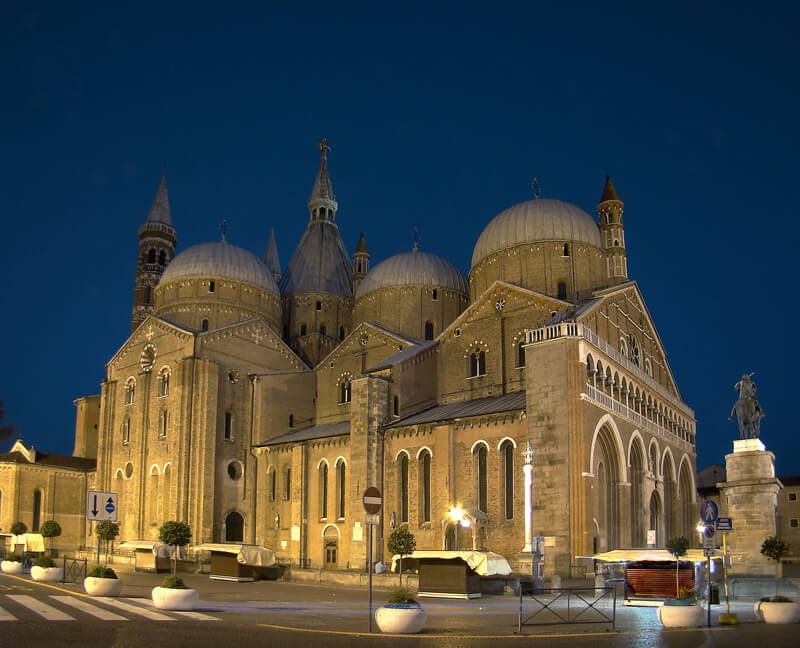 West of Piazza delle Frutta is the beautiful Piazza dei Signori, also enclosed by ancient buildings, among them the Loggia del Consiglio or della Gran Guardia (1496-1523) and the Palazzo del Capitanio (1599-1605) on the site of the palace of the Carrara family. The tower of the palace still stands and has a clock dating from 1344, said to be the oldest in Italy. Farther west are the cathedral (founded in the 9th century, rebuilt in 1552), the baptistery (1260), whose walls and domes are covered with murals by Giusto de’ Menabuoi (1376-1378) depicting Biblical stories, and the episcopal palace and library. The 13th century castle, once the residence of Ezzelino III da Romano, is now a prison. Since 1777 its tower has housed an astronomical observatory.

In the northern part of the city are two of Padua’s most prized treasures—the Church of the Eremitani and the Scrovegni Chapel. The former, in the Romanesque-Gothic style, contains in the Ovetani Chapel Mantegna’s masterpiece, a series of frescoes painted between 1448 and 1454 or 1457. Direct hits during an Allied air raid in 1944 broke the frescoes into innumerable fragments, which were carefully restored. Two panels remained intact and two more were saved because they were stored elsewhere. In the Scrovegni Chapel Giotto portrayed (c. 1303-1306) the Story of the Redemption in 38 panels, still well preserved. This work is the highest expression of his art at the time of his artistic maturity.

In the city’s southern section rises the Basilica of St. Anthony, called simply II Santo, an imposing Romanesque-Gothic structure with Byzantine and Renaissance elements, surmounted by 7 gilded domes. It was begun in 1232 in honor of St. Anthony (d. 1231), who is buried there. In front of the church stands the statue of the condottiere Gattamelata (Erasmo da Narni), one of Dona-tello’s greatest works. Also by Donatello are some of the bronze statues of the high altar within the church.

On the church square stand the Scuola di Sant’Antonio, with frescoes by Titian; the municipal museum containing a rich collection of paintings of the Venetian School; an archaeological museum; and a library. Nearby are the botanical gardens, the oldest in Europe (1545), and beyond them the Prato delle Valle, a large square which was the center of the Roman town. In its southeast corner is the Church of Santa Giustina, one of the city’s richest, with eight striking domes.