What are the features of cubism? What is the origin and development of cubism art? Information on cubism and cubism types.

CUBISM, perhaps the most revolutionary movement of early modern art, developed in France between 1907 and the early 1920’s. Essentially, cubism was a new way of seeing nature and a work of art, different from any way of seeing used by artists previously.

Since the Renaissance, painters had utilized spatial illusions based on systems of linear and atmospheric perspective. The spectator, looking at such a painting, observes a cube of space in which an illusion of depth is created by a geometric diminution of objects in scale and a progressive decline in clarity of outline as, apparently, the objects recede into the distance. During the 19th century, pioneers of modern art had. by various means of limiting and controlling the depth, created a balance between three-dimensional illusion and the actual two-dimensional surface of the painting. Experimentation had begun with Courbet and Manet and was continued by the impressionists and postimpressionists— Degas, Seurat, Gauguin, Van Gogh, and, above all, Cezanne. In all these efforts, however, with the exception of the late paintings of Cézanne, there was little distortion of the human figure or objects or of the space they occupied. 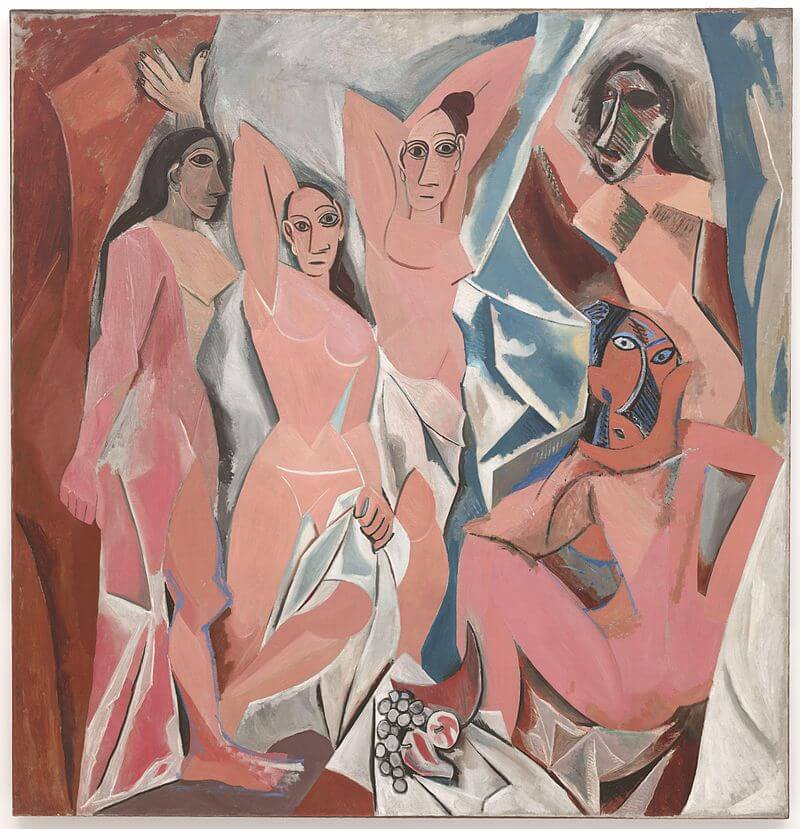 Pablo Picasso, Les Demoiselles d’Avignon, 1907, considered to be a major step towards the founding of the Cubist movement (Source : wikipedia.org)

Pablo Picasso in 1907—and Georges Braque at about the same moment, but independently—demonstrated for the first time the principle that even the figure could be subordinated to the total painting. It could be distorted, cut up, and transformed into a series of flat-color facets indistinguishable from the comparable planes that composed the environment in which it existed. From this discovery it was only a short step to the realization that a painting could exist as an abstract arrangement of lines and color shapes, independent of figures, landscape, or still life. Thus cubism introduced the principle that led ultimately to nonobjective art.

The key work in the discovery of cubist principles was Picasso‘s painting Les demoiselles d’Avignon ( 1907; Museum of Modern Art, New York), which illustrates many of the principles of cubism. Perspective painting had insisted on a single, unified point of view: what would be observed by a spectator standing in a fixed position before the subject. In Les demoiselles (perhaps using the example of Egyptian and other preclassical art), Picasso shifted the point of view at will. Heads, noses, and eyes are seen simultaneously in profile and full-face. Figures are shown geometrically, and the foreground table widi fruits is seen from above. In other words, the vision of the spectator is enlarged to include a number of different views—as though he were moving from point to point, now looking up and now looking down. Modern studies of perception have shown that this is the way we form a visual image of a thing—not from one fixed, all-encompassing glance but from an infinite number of momentary glimpses, formulated and unified into a whole by the spectator’s mind. Cubism thus introduced into painting not only a new kind of space but also another dimension—time.

Picasso was joined by Braque in 1908, and for the next six years these two artists pursued together their investigation of cubism and all its implications. Braque submitted a number of his new paintings to the progressive Salon d’Automne in 1908, and Henri Matisse on this occasion is supposed to have referred to Braque’s “petits cubes.” Before long the epithet “cubism” had become the accepted name of the movement.

Between 1909 and 1912 the paintings of Picasso and Braque became increasingly nonrepresentational, although cubism never became completely abstract, never lost all suggestion of figure, still life, or landscape. There was a progressive change in cubist style during these years from a kind of sculptural relief-modeling in geometric planes to a style in which the third dimension— the illusion of depth—almost disappeared completely. It was stated entirely in terms of flat, slightly-angled planes that do not recede much beyond the surface of the canvas. Both Picasso and Braque limited their colors at this time mainly to greens, browns, and ochre.

The Renaissance tradition of painting based on perspective had been devoted largely to the imitation of nature. The painting became a painted illusion of a man, a still life, or a landscape. Cubist painters in effect were examining this central problem of illusion and reality, asking, “Is reality in the eye of the spectator, or is it whatever appears on the canvas?” Their concern with reality on and off the canvas led cubists to incorporate in their paintings bits of actual reality—in the form of words and letters that were either painted or cut out of newspapers and pasted on the canvas. They acted as “real” themes in counterpoint to the abstract structure of the rest of the painting. These experiments in technique led to collage, or papier collé, and other new forms in painting, as well as to new concepts of construction in sculpture.

After the initial experiments by Picasso and Braque, cubism spread rapidly. Other artists who developed variations of this new vocabulary were Albert Gleizes, Jean Metzinger, Robert Delaunay, Fernand Léger, Roger de La Fresnaye, Jacques Villon, and Marcel Duchamp. Cubist ideas and forms affected the German expressionism of Franz Marc and others and had a great influence on the painters of the Italian futurist movement. The basic ideas of cubism were carried to their logical conclusions in the severely abstract paintings of the Dutch artists Piet Mondrian and Theo van Doesburg and in the work of the Russian painters and sculptors Kasimir Malevich, Vladimir Tatlin, Naum Gabo, and others. The impact of cubism on the development of 20th century sculpture was as germinal as its impact on modern painting. Cubist principles were applied to sculpture not only by Picasso but by Alexander Archipenko, Raymond DuchampVillon, Jacques Lipchitz, and Henri Laurens.

During World War I the cubism of Picasso, Braque, and their major followers, such as Juan Gris, became more expansive and colorful. Having gained control of then-new pictorial vocabulary in the first stage of their experiments (analytical cubism), artists began to play many variations on cubist themes in the second period ( synthetic cubism ). The synthetic cubist styles made less use of simultaneous views from various angles and more use of collage. They not only reintroduced more positive color but at times combined cubist space with aspects of Renaissance perspective space.

Some of the greatest cubist paintings, such as Picasso’s Three Musicians (1921; Museum of Modern Art, New York), were produced in the early 1920’s when cubism as a distinct movement seemed to be declining. In fact, this was only apparently so, since aspects of cubist forms continued to reappear in the works of experimental artists at least until the mid-20th century. Picasso’s great painting Guernica ( 1936; Museum of Modern Art, New York) was still constructed on cubist principles. Willem de Kooning and many of the other leaders of American abstract expressionism in the 1940’s and 1950’s continued to derive basic ideas from cubism.