Indian Ocean; the world’s third-largest ocean lying south of Asia, north of Antarctica, and between the continents of Africa and Australia. The ocean, including marginal seas, covers an area of 28,920,000 square miles (74,902,800 sq km). There is no natural division between the Indian and Atlantic oceans, but the boundary is usually placed at the Cape of Good Hope ( 20° E meridian ). The boundary between the Indian Ocean and the Pacific Ocean runs through the Malay Peninsula, Sumatra, Java, Timor, Australia, and Tasmania, and then follows the 147° E meridian to Antarctica.

The principal bodies of water along the margins of the Indian Ocean are the Red Sea, Arabian Sea, Bay of Bengal, Andaman Sea, Strait of Malacca, Timor Sea, and the Great Australian Bight. The average depth of the ocean is about 13,080 feet (3,987 meters) if marginal seas are excluded, or 12,840 feet (3,914 meters) if they are included. The deepest known point is in Java Trench, which descends to 24,390 feet (7,434 meters) just south of Java. 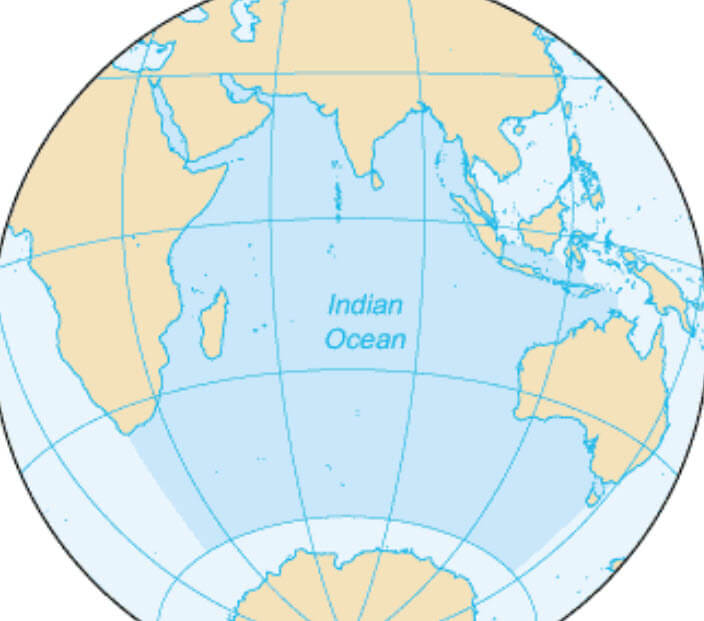 The floor of the ocean drops steeply from narrow continental shelves to vast abyssal plains and basins separated by extensive ridges and plateaus. Deep submarine canyons in the shelf beyond the mouths of the Indus and Ganges rivers lead to fans, or cones, of sediment that slope gently southward for hundreds of miles. The dominant submarine mountain, system is the Mid-Indian Ridge, extending from near the Arabian Peninsula in a wide arc to the south before it divides into two arms in the area east of Mauritius to form a huge inverted Y. The longest straight ridge thus far discovered in any ocean is the Ninetyeast Ridge, which stretches from latitudes 10° N to 32° E meridian.

South of the continental island of Madagascar lie the undersea Mozambique and Madagascar plateaus. The Seychelles, Laccadive, Maldive, Chagos, and Kerguelen island groups also rest on oceanic plateaus. Réunion and Mauritius east of Madagascar, and the Prince Edward and Crozet islands, far to the south are of volcanic origin. There are several coral formations in the ocean, including the Cocos Islands in the northeast.

Most of the Indian Ocean lies in tropical and subtropical latitudes. In the northern portion climates are dominated by monsoon winds that blow toward Asia in summer and out from the continent in \yinter. During the summer the onshore monsoon produces frequent rains as it approaches the zone of intertropical convergence lying over South Asia. In winter the tropical convergence shifts to an average position slightly south of the equator, and the dry northeast monsoon blows out from Asia. The southeast trade winds prevail over much of the Southern Hemisphere tropics, bringing rain to windward slopes of the few scattered islands. The westerlies dominate the southern reaches of the ocean, where frontal storms are common.

Tropical cyclones often form along the zone of intertropical convergence when it lies a few degrees from the equator. Cyclones in the Bay of Bengal and Arabian Sea occur primarily between the monsoon seasons ( May-June and October-November ). Most cyclones are weak storm systems that cause prolonged cloudiness and rain, but some develop hurricane violence. Tropical cyclones also visit the vicinity of Madagascar and the region off the northwest coast of Australia.

South of latitude 10° S the surface currents form a counterclockwise circulation throughout the year. The South Equatorial Current is swept along by the southeast trades, and the Equatorial Countercurrent flows from west to east along its northern margins. The Mozambique Current flows southward through the Mozambique Channel to join the Agulhas Current off the east coast of South Africa. In the latitudes of the prevailing westerlies the West Wind Drift moves eastward across the entire southern Indian Ocean toward Australia, where the West Australian Current completes the circulation northward to the vicinity of the equator.

The Indian Ocean was the first ocean to be extensively navigated by, man. Ancient Egyptians ventured into the Arabian Sea, and Arabs and Chinese later engaged in trade and exploration along the coasts of South Asia. Arab missionaries spread the teachings of Islam to Indonesia and along the African coast. Near the end of the 13th century, Marco Polo returned from China by way of the Strait of Malacca.

The Portuguese navigator Vasco da Gama became the first to sail from Europe to the Indian Ocean when he rounded the Cape of Good Hope in 1497 on his way to India. Juan Sebastián del Cano, commanding ( after Magellan’s death ) the first ship to circumnavigate the globe, crossed the Indian Ocean from east to west in the Victoria in 1521. The southernmost Indian Ocean was traversed by Capt. James Cook on his voyages in 1772 and 1776.

One of the first modern scientific expeditions in the Indian Ocean was conducted on the British ship Challenger from 1872 to 1876. Other oceanographic explorations were made in the late 19th century by Austria, Germany, and the Netherlands. From 1959 to 1965 several nations cooperated in the International Indian Ocean Expedition, which advanced knowledge of ocean and weather conditions.

Early European trade in spices, silks, and other Oriental products was developed primarily by the British, Dutch, and Portuguese merchants, who established colonies and trading ports along the coasts and on several islands of the Indian Ocean. Completion of the Suez Canal in 1869 shortened the sailing time from Europe to the Far East and Australia, leading to expansion of trade through such ports as Zanzibar, Aden, Bombay, and Singapore. In the 20th century one of the most common cargoes on the sea lanes of the Indian Ocean has been petroleum from the Middle East and Indonesia.