What is the definition of silk? Information about the features of silk, history and development of silk industry.

SILK is a fine, lustrous fiber produced by silkworms and other insect larvae, generally to form their cocoons. The breeding of silkworms and the making of silk began in prehistoric times. China is generally credited with the first silk culture, although some claims have been made that it originated in India. 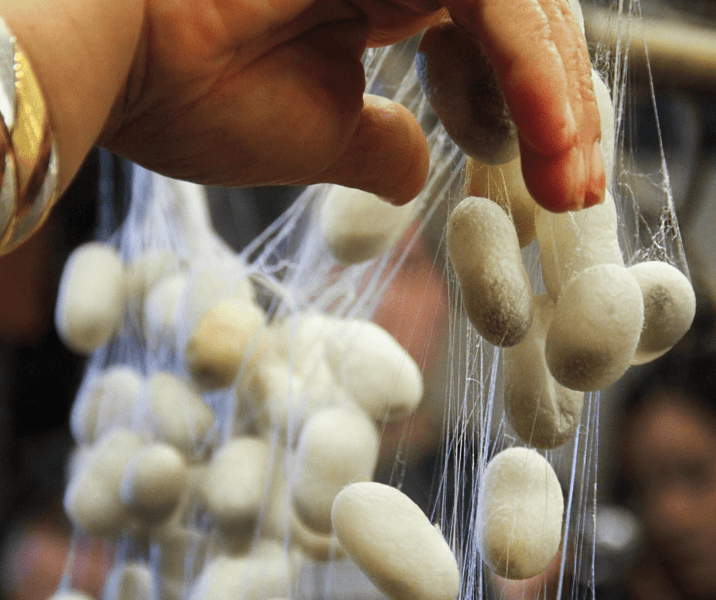 Development of the Silk Industry

Traditional Chinese accounts ascribe the cultivation of silkworms and the weaving of silk to the wife of the legendary emperor Huangti, who is supposed to have lived in the 3d millennium b. c. In any event, silk culture flourished by the time of the Shang dynasty (c.1523-1027 b.c.).

Aristotle and Pliny described the silkworm, but for centuries after silk fabrics were known in the West, the prevalent opinion was that silk was either a fleece that grew on a tree or the fiber from the inner bark of some tree or shrub. Some persons, deceived by the glossy, silky fibers of the seed vessels of Asclepias and the silk-cotton tree, believed that it was the product of one of these. A few came near the truth with the conjecture that silk was spun by a spider or beetle. So carefully did the Orient keep its secret that it was not exposed until 552 a. d., when two Nestorian monks, who had lived in China, concealed a small quantity of silkworm eggs and brought them to Constantinople.

From Constantinople, sericulture spread through the Balkan Peninsula, and Byzantine silks soon became prized in Europe for ecclesiastical vestments. Although the looms of Constantinople declined in the 8th and 9th centuries, those of Thebes and other Greek and Syrian cities increased their production and improved their methods of manufacture. The Greeks maintained their supremacy until 1204, when the Latin Empire of Constantinople was established. Meanwhile, the Arabs had introduced the industry into northern Africa, Spain, Portugal, and Sicily. Spanish and Sicilian production was substantial by the 11th century. When the Normans conquered Sicily, beginning about 1060, they encouraged the local silk industry. The second Norman ruler of Sicily, Roger II (reigned 1105-1154), invaded Greece in 1147 and took captive a number of silk weavers. He established them in Palermo and Calabria, where they were induced to teach the Greek methods of silk culture.

In the reign of Louis XI (1461-1483) silk was manufactured in Tours and later in Lyon, Montpellier, and Paris. Cocoons were first raised successfully in France in the reign of Francis I (1515-1547). The French silk industry, encouraged by successive rulers, expanded until 1685, when the revocation of the Edict of Nantes drove into exile about 400,000 Huguenots, many of whom were silk workers. Not for many years did the industry regain the ground it had lost, and then it was almost destroyed again during the French Revolution. Those Huguenots who settled in England tried to manufacture silk there, but without much success until 1718, when a new method of throwing was introduced. Thereafter, the English industry expanded rapidly, and English silks replaced French in the European market. The French industry revived with the aid of protective tariffs in the Napoleonic and Restoration periods. Conversely, the industry in England was almost ruined after 1860, when that country negotiated a commercial treaty that admitted French silks duty free. Silk manufacture also flourished in Switzerland and Germany in the 19th century. The Belgian and Dutch industries, dating from the late Middle Ages, remained productive during the 19th century. The Russian industry received a great impetus in the 1890’s with the enactment of a protective tariif.

With the opening of the treaty ports in China in the mid-19th century, large quantities of raw silk began to reach world markets from Shanghai and Canton. China exported only its surplus, the great bulk of its raw silk being woven and sold in the home market. The same has been true of the minor producing areas in Asia. There has been some export of Asian manufactured silks, particularly those of China, India, and Japan. In 1857, Japan entered the raw silk export field and rapidly assumed leadership.

The first silk mill in the United States was established in 1810 at Mansfield, Conn. However, the American industry did not prosper until protective tariffs on manufactured silk were introduced in the latter half of the 19th century.