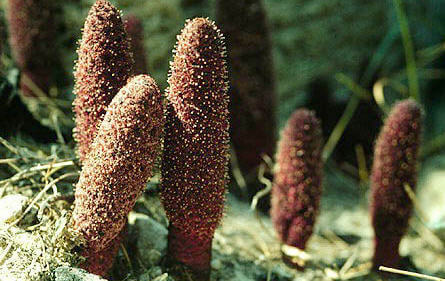 PARASITIC PLANTS, plants which live upon and at the expense of other plants to which they become attached. The group is not well defined, since many of the lower forms have saprophytic habits also, or may develop them under favorable conditions, and since some higher plants exhibit more or less parasitic tendencies.

All of the members of the group are alike in their method of feeding: sucking organs (haustoria) are developed within the host plant’s tissues, their office being to absorb the liquids which the host plant obtains from the soil and the food elaborated by the green parts of the host. It is assumed by botanists that this habit has resulted in sexual degeneracy, so that in some cases sexuality appears to have been lost entirely.

As a consequence of this the vegetative functions are in many cases remarkably developed. In other cases the life history is remarkably complex, especially among the lower fungi, for instance, apple rust. The flowering parasitic plants may or may not contain chlorophyll, in the former case being able to utilize the carbon dioxide of the air in the manufacture of a part at least of their food; in the latter case being dependent nearly if not entirely upon the host.

Familiar instances of the former are bastard toadflax and mistletoe; of the latter, broomrape and dodder. This last is remarkable also because its seeds germinate in the ground, send up slender, leafless, threadlike stems, and after becoming attached to a host die at their lower extremities.