What is the history and occurence of oxygen element? Information about the physical and chemical properties of oxygen.

Oxygen was recognized by its properties as long ago as the 8th century by the Chinese. It was thought that an “active” component of the air combined with some metals, sulphur, and charcoal and that this active component could be obtained in its pure form from saltpeter and certain other minerals.

Leonardo da Vinci (1452-1519) was the first European to state that the air contains two gases, but Joseph Priestley (1733-1804) is generally credited with the discovery of oxygen in 1774. He obtained a pure sample of oxygen by heating mercuric oxide using the sun’s rays through a burning glass. Oxygen was probably liberated from at least seven different substances by Karl W. Scheele (1742-1786), an apothecary in Sweden, in 1771-1772 independently of Priestley’s experiments, but his results were not printed until 1777.

Many other chemists worked on air and the commonly known gases of that time. These studies furnished the background material on which Antoine L. Lavoisier (1743-1794), the great French philosopher and scientist, based his conclusions which may be said to form the foundation of modern chemistry. The name “oxygen” (from the Greek, meaning “acid-forming”) was given to the gas by Lavoisier, who thought that it was an essential constituent of all acids.

Oxygen is the most widely distributed element in nature. It has been estimated that it makes up nearly one half of all terrestrial matter. It forms 20.93 per cent by volume of dry air; it constitutes one third by volume and nearly 89 per cent by weight of all the water in the world, about 65 per cent of the human body, and nearly one half of three of the chief constituents of the earth’s crust: siliceous rock, chalk, and alumina. Many other minerals contain oxygen in considerable proportions.

Aside from its existence in the water of tissue, oxygen is an essential constituent of all living organisms. It is absorbed by all animals during respiration and is emitted from growing vegetable organisms by photosynthesis. The latter process occurs when chlorophyll-containing tissues are exposed to sunlight.

Oxygen is a colorless, tasteless, and odorless gas. It is 1.1053 times as heavy as air. It is very reactive, having the property of combining with all other elements except the inert gases in Group O. At one time, oxygen was the standard of comparison for all atomic weights of the elements; its weight was fixed at 16.00. However, in 1961 the carbon atom was substituted as the standard; its atomic weight was set at 12.0000. As a result, the atomic weight of oxygen has been changed to 15.9994.

The “critical temperature” of oxygen is —118.8°C. Above this temperature oxygen cannot exist as a liquid and therefore cannot be liquefied by pressure alone. The “critical pressure” (the pressure necessary to raise the boiling point to the critical temperature) of oxygen is 49.7 atmospheres. At atmospheric pressure, the melting point is —218.8°C. and the boiling point is —183°C. Both solid and liquid oxygen are transparent and are pale blue when in considerable volume. Liquid oxygen is strongly magnetic. If one volume of liquid oxygen at atmospheric pressure is allowed to evaporate, 862 volumes of gaseous oxygen are evolved at normal temperature and pressure (70°F. and 14.7 pounds per square inch, absolute pressure). 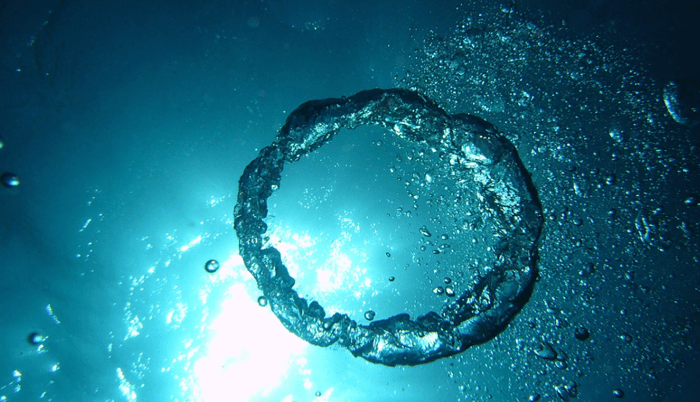 A few metals in the molten state absorb oxygen. The oxygen is given off when the metals solidify. Heated at 450° C., silver absorbs about five times its volume of oxygen, gold 35 to 40 times, platinum 65 to 75, palladium about 500 times, finely divided platinum about 100 times, and palladium sponge about 1,000 times.

In a Geissler tube oxygen shows a luminous spectrum containing a bright band in the red, two in the green, and one in the blue. The spectrum varies under different conditions.

Oxygen forms oxides by direct combination with nearly all other elements. Most of the non-metallic elements combine with oxygen to form acid anhydrides. Hydrogen forms a neutral oxide—water.

In many cases, when a substance combines with oxygen, heat and light are evolved. This phenomenon is known as combustion (such as the burning of a fuel). Many combinations, however, are not accompanied by light or extreme generation of heat. This type of reaction is called oxidation, a familiar example being the rusting of iron.

Oxygen is noncombustible, although it actively supports and accelerates combustion. This property is the basis for most of its commercial applications. All substances which burn in air burn with much greater brilliancy in pure oxygen. Many substances which will not normally burn in air can be burned in oxygen. An iron wire, if heated to its ignition temperature, burns with dazzling brillance when immersed in pure oxygen.

Some authorities claim, however, that even at high temperatures the presence of a trace of moisture is necessary for free oxidation. In absolutely dry oxygen even sulphur and phosphorous can be distilled, carbon can be made red hot without any combustion occurring, and a jet of burning carbon monoxide is entirely extinguished. But the presence of the minutest trace of moisture is sufficient to restore oxygen to its activity.

The oxygen of the air supports respiration, and oxygen is the only gas suitable for this need of animal life. A normal, healthy person gets all the oxygen which he needs from ordinary air (about 21 per cent oxygen). However, additional oxygen in concentrations up to 99.5 per cent can be administered to persons who are ill and cannot get the oxygen which they need from the air.

The body heat of all animals is furnished by oxidation. Slow oxidation of organic materials, which otherwise would cause discomfort or disease, takes place universally in nature, so that the waters of streams are automatically purified by absorbing oxygen from the air When large volumes of pure water are mixed with sewage, dissolved oxygen aided by bacteria render the organic matter harmless. Not all slow oxidations, however, are beneficial. The “hardening” of certain oils, such as linseed oil, involves direct union with oxygen. This reaction, desirable when a surface is being painted, is also the basis of so-called spontaneous combustion. If oil-soaked rags, for example, are allowed to accumulate in a place where air circulation is sufficient for slow oxidation, but not for removing the heat generated by the chemical reaction of oil and oxygen, the heat accumulates. Finally the mass is heated to its ignition temperature and bursts into flame. A haystack or a coal bunker may be ignited also by spontaneous combustion.

Many carbonaceous materials which are not ordinarily explosive are extremely dangerous, when mixed, as finely divided particles, with certain proportions of air. In 1878 a tremendous explosion caused by flour dust in a Minneapolis, Minn., flour mill demonstrated this fact. Finely divided coal dust has been the cause of many disastrous mine explosions and fires. Even metals, such as iron, will burn readily, if the material is in the form of finely divided powder. These are all instances of the combination of oxygen with other materials.