What are the types and characteristics of mushroom plant? Information about species, distribution, cultivation and uses of mushroom.

MUSHROOM, the popular name given to any of the larger fleshy fungi, mostly of the class Basidiomycetes. The greatest proportion of mushrooms, comprising several hundred species, consists of gill fungi (Agaricaceae). Some authors have attempted to distinguish between mushrooms and toadstools on the basis, respectively, of their edible or poisonous qualities, but quite often the two names are used interchangeably: Like other fungi, mushrooms do not contain chlorophyll and cannot manufacture their own food. Most of them live on decaying organic matter in such forms as dead wood, humus, and manure, but a few are capable of living, at least in part, as parasites on trees. In nutritive value, mushrooms compare favorably with many fresh vegetables. They are notably rich in vitamin B but deficient in vitamins A, D, and E.

The best-known species in North America is the common edible mushroom, Agaricus campestris. It has a whitish cap and a stout stalk with a ring near the top. When young, the gills are pink, but later, as the spores mature, they turn brown. The wild, four-spored form is common in open grassy places. The commercial, two-spored form, which is sold fresh or canned, though very similar in appearance, is considered by some authorities to be a separate species. It is grown on a large scale in the United States, the leading state in its production being Pennsylvania. At one time it was common to grow mushrooms in caves, abandoned mines, and similar places where the proper temperature and humidity could be maintained, but with the development of the mushroom industry most mushrooms came to be grown in especially constructed houses where conditions favorable for growth might be more carefully controlled. Well-composted horse manure is still the preferred substratum for mushroom growing, but artificial manures, composed of straw and other plant residues to which organic or inorganic fertilizers have been added, are used to some extent. The amateur who wishes’to grow mushrooms in his cellar may obtain further information from the United States Department of Agriculture’s bulletins on mushroom growing. 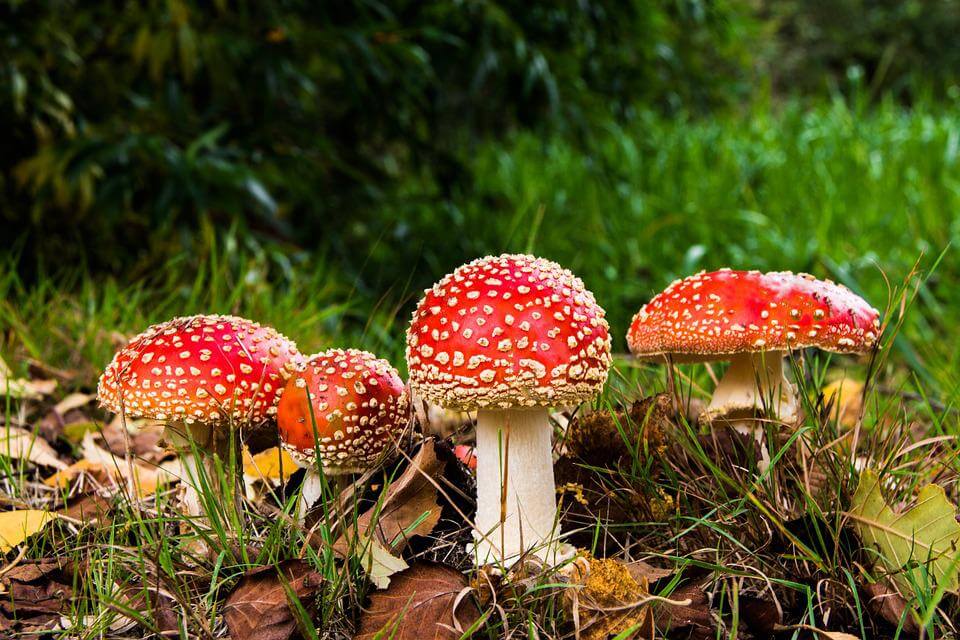 In Europe several species of mushrooms are gathered in woods and fields and sold fresh or dried in the market. The same kinds usually occur commonly in the United States, and with many other edible mushrooms they would make delicious additions to the fare of anyone who would take the trouble to learn them. The great majority of mushrooms are edible, and very few cause serious poisoning. The best procedure for an amateur collector would be to learn thoroughly several common edible species and collect only those for the table. He should also learn the few very poisonous species in order to avoid them. A good field guide to the mushrooms would be of great assistance. There is no substitute for learning to recognize the desirable species, since there are no simple tests that may be relied upon to distinguish edible and poisonous mushrooms.

The morels, of which Morchella esculenta is the best-known species, are highly prized for their flavor. They have whitish stalks and conical or cylindrical, brownish to olive gray caps that are pitted or honeycombed. These easily recognized fungi should be sought in early spring in orchards and deciduous woods. The edible bolete (Boletus edulis), common in Europe and North America, has a reticulated stalk and a brownish cap with a separable layer of pores beneath. Other species of Boletus also are edible, but several have poisofous properties. 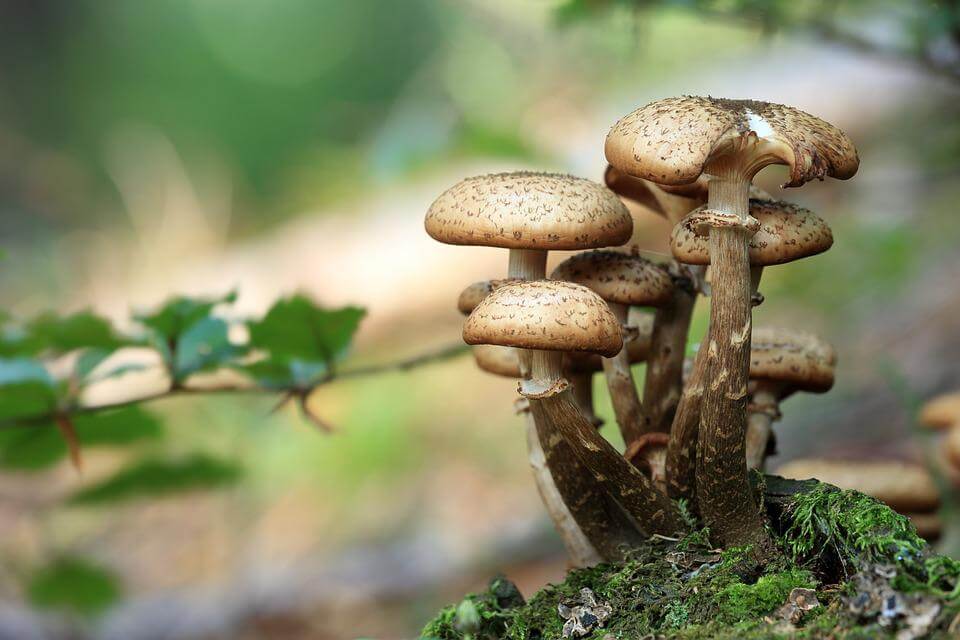 The chanterelle (Cantherellus cibarius), which is considered a delicacy in France, is frequent in woods and open places in much of the United States. The fruiting bodies are funnel shaped and yellow, with forked, ridgelike gills extending down the stalk. The oyster mushroom (Pleurotus ostreatus), so called because of its flavor, is commonly found in overlapping clusters on logs and dead or dying hardwood trees. The fruiting bodies have short, laterally attached stalks and caps that are white to ashy gray, with white gills underneath. One of the best flavored of all mushrooms, the honey agaric (Armillaria niellea), occurs in clusters on the ground or on old stumps and other decaying wood. Its color is light tan, honey yellow, or chestnut brown. The gills usually extend down the stalk, and the latter is provided with a ring.

The fairy-ring mushroom (Marasmius oreades), though rather small, is often found in abundance and is popular because of its nutty flavor and drying qualities. It is a buff-colored species that occurs chiefly in open grassy places, often in circles called fairy rings. There was once a superstition that these were rings around which fairies danced. Actually, they are caused by the outward growth of the mycelium or vegetative part of the fungus each year in an ever-broadening circle, the fungus fruiting annually in each new area of mycelial growth. Several other gill fungi, including Agaricus campestris, may also form fairy rings. 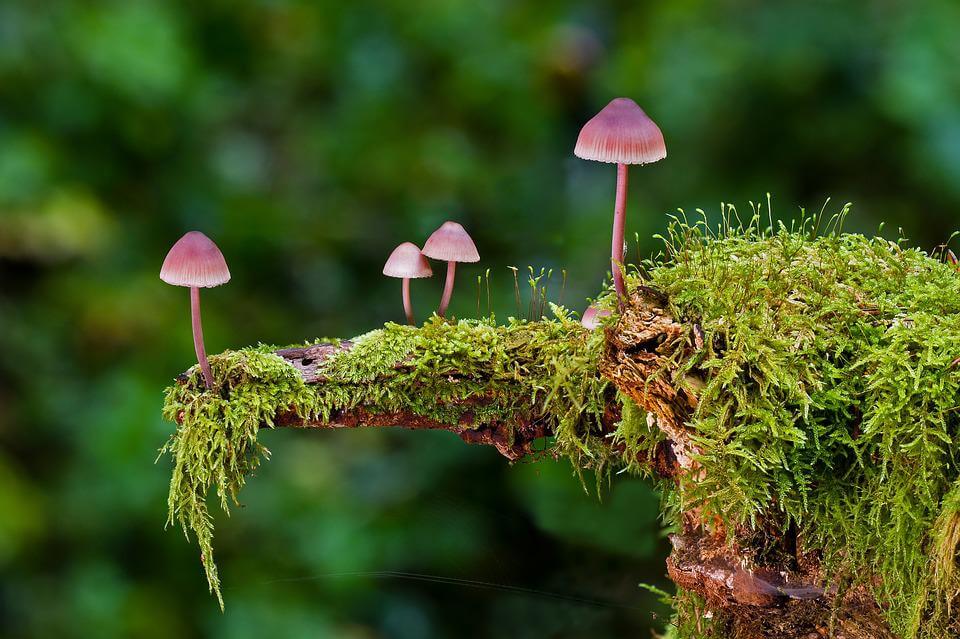 Species of the genus Coprinus are known as inky cap mushrooms because the cap and gills liquefy with age. The black color of the inky fluid is caused by the presence of numerous dark spores. The fruiting bodies, which have slender stalks and bell-shaped or cylindrical caps, commonly occur in clusters on stumps or other dead wood and on manure or manured ground. Though desirable for eating, they must be cooked soon after picking because of their deliquescent tendencies.

One of the most delicious of all mushrooms is the royal agaric or Caesar’s amanita (Amanita caesaria), but because it occurs in a genus that contains some of the most poisonous mushrooms known, no one should collect it for eating without being thoroughly familiar with it. It is a strikingly beautiful and showy species and is easy to recognize. It has a large, smooth, reddish orange cap, which becomes lighter colored toward the striate margin, and a slender yellow stalk with a yellow ring above and a conspicuous white cup at the base. The gills are light yellow. This species was highly prized by the ancient Romans and was one of the choicest dishes served to the emperors.

None of the puffballs are known to be poisonous, although several are not eaten because of their texture. They are typically somewhat globular in shape and are found abundantly in woods and open places. Several species of Lycoperdon and Calvatia are commonly eaten. The largest of these is the giant puffball (Calvatia gigantea), which sometimes reaches a diameter of over four feet.

There are very few deadly poisonous mushrooms, although a number of species can cause illness. The deadliest is the destroying angel (Amanita verna), a gill fungus that is so easily recognized that there is little excuse for confusing it with edible mushrooms. Nevertheless, it has been estimated that 90 per cent of all deaths due to mushroom poisoning are caused by this species. The fruiting body is white throughout, with a distinct cup at the base and a well-developed ring around the stalk just beneath the cap. It has been reported that a single forkful may cause death. The first symptoms of poisoning usually do not occur before 10 to 15 hours after eating. The fly agaric of fly amanita (Amanita muscaria) also is poisonous, but not so deadly as the destroying angel. It has a bright red or orange cap with white scales on top and a white stalk with a bulbous base and a white ring above. The gills are white. 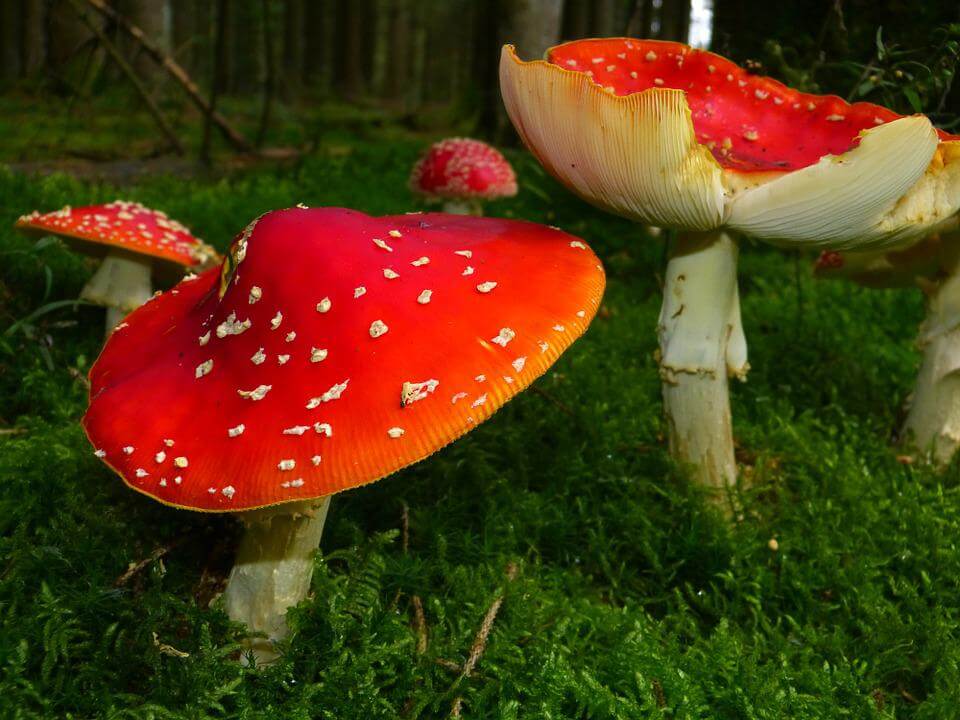 If mushroom poisoning is suspected, one should take an emetic and call a physician at once. A much better course is to avoid poisoning by picking and eating only well-recognized, edible species.