Marzipan is a sweet that consists mainly of sugar or honey and almond flour (ground almonds), sometimes augmented with almond oil or extract.

It is often made in sweets; the common uses are marzipan covered in chocolate and small imitations of marzipan fruits and vegetables. It is also rolled into thin slices and glazed for icing cakes, mainly birthdays, wedding cakes and Christmas cakes. This use is particularly common in the United Kingdom, in large fruit cakes. The marzipan paste can also be used as a baking ingredient, as in stollen or banket. In some countries, it is transformed into small animal figures as a traditional gift for New Year’s Day. Marzipan is also used in Tortell, and in some versions of the king cake is eaten during the Carnival season. The traditional Swedish princess cake is typically covered with a layer of marzipan that has been dyed a pale green color.

In Italy, particularly in Palermo, marzipan (marzapane) is often modeled and painted with dyes to resemble fruit-Frutta martorana, especially during the Christmas season and at Il Giorno dei Morti (Souls Day) on November 2 . 10 are also special days to eat marzipan in Sicily. In Portugal, where the confection has traditionally been made by nuns, the marzipan (maçapão) is used to make sweets in the form of fruit; In the Algarve region, in particular, it is a very common sweet. 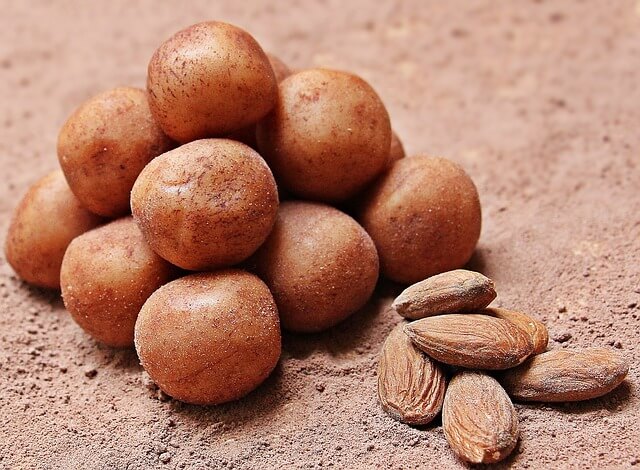 There are other regions, such as Toledo in Spain, where marzipan (marzipan) is modeled in simple animal forms, and sometimes filled with egg yolk and sugar. In Greece and Cyprus, marzipan is made in a variety of shapes and sizes and is almost always left white. On the Aegean islands in particular, white marzipan is considered a wedding gift and is served to guests at wedding parties. In Malta, marzipan is used as a filling for traditional Maltese Easter delicacies called Figolla.

In Holland and Belgium, marzipan figures are given to children on the eve of San Nicolás. In Germany, it is common to give marzipan in the form of bread, which is called “Marzipanbrot” during Christmas and in the form of small potatoes (Marzipankartoffeln). A traditional New Year’s gift is known as Glücksschwein (“lucky pig”). In Denmark and Norway, it is common to eat marzipan pigs for Christmas and marzipan in the form of eggs for Easter and Kransekage for New Year’s Eve. In Geneva, a traditional part of the celebration of L’Escalade is the ritual breaking of a chocolate cauldron full of marzipan vegetables, in reference to a Savoyard siege of the city that was supposedly thwarted by a housewife with a cauldron of boiling soup. In Tallinn, in the Maiasmokk coffee shop, there is a small museum dedicated to the history and manufacture of marzipan.

In the Middle East, marzipan (known as لوزینه lozina, lowzineh, a Persian word derived from lawz, “almond”) is flavored with orange water and is shaped into roses and other delicate flowers before they are baked. Marzipan can also be prepared with oatmeal, farina or semolina flour. In Iran, marzipan fruit is a traditional Passover delicacy, replacing biscuits and cakes.

In the Indian state of Goa, the Goan Catholic Mazpon dish replaces almonds with cashews and is used to make Easter eggs and Christmas sweets. The Christmas sweets would be of different shapes, such as fruits, flowers, stars, trees, santa, snowmen and other designs. In the Philippines, the marzipan was brought from Spain, the marzipan of pili (in Spanish, “pili marzipan”) is made of pili nuts.

There are two proposed origin lines for marzipan; they are not necessarily contradictory and can be complementary, since there have always been Mediterranean influences in commerce and cooking. Other sources establish the origin of marzipan in China, from where the recipe went to the Middle East and then to Europe through Al-Andalus.

Although it is believed that it was introduced into Eastern Europe through the Turks (badem ezmesi in Turkish, and most notably produced in Edirne), there is some dispute between Hungary and Italy about its origin. In Sicily it was (1193) known as panis martius or marzapane, that is, March Bread. Marzipan became a specialty of the port cities of the Hanseatic League. In particular, the cities of Lübeck and Tallin have a proud tradition of making marzipan. Examples include Lübecker Marzipan (PGI).

The manufacturers of the city like Niederegger still guarantee that their marzipan contains at least two thirds of almonds by weight, which results in a product of the highest quality. Historically, the city of Königsberg in East Prussia was also recognized for its distinctive marzipan production. The Königsberg marzipan is still a special type of marzipan in Germany that is golden on its surface and sometimes encrusted with jam in its center.

Another possible geographical origin is found in Spain, then known as Al-Andalus. In Toledo (850-900, although probably more than 1150 during the reign of Alfonso VII) this specialty was known as Dessert Regio (instead of Mazapán) and is also mentioned in the book of thousand and one nights a paste of almonds that It is eaten during Ramadan and as an aphrodisiac. Mazapán is Toledo’s most famous dessert, often created for Christmas, and has IGP status. The almonds must be at least 50% of the total weight, following the guidelines of the regulatory council of Mazapán de Toledo. Another idea to support this line is the important tradition of another Christmas confectionery based on Spanish almonds, nougat.

According to EU legislation, marzipan must have a minimum content of almond oil of 14% and a maximum moisture content of 8.5%. The optional additional ingredients are rose water, honey, pistachios, preservatives and, sometimes, hazelnut. In the USA UU., The marzipan is not officially defined, but it is usually made with a higher proportion of sugar and almonds than the almond paste. A brand, for example, has 28% almonds in its marzipan and 45% almonds in its almond paste. However, in Sweden and Finland the almond paste refers to a marzipan that contains 50% ground almonds, a much higher quality than regular marzipan. In Germany, Lübecker Marzipan is known for its quality. It contains 66% almonds. The original Mozartkugeln produced manually are made of green pistachio marzipan. 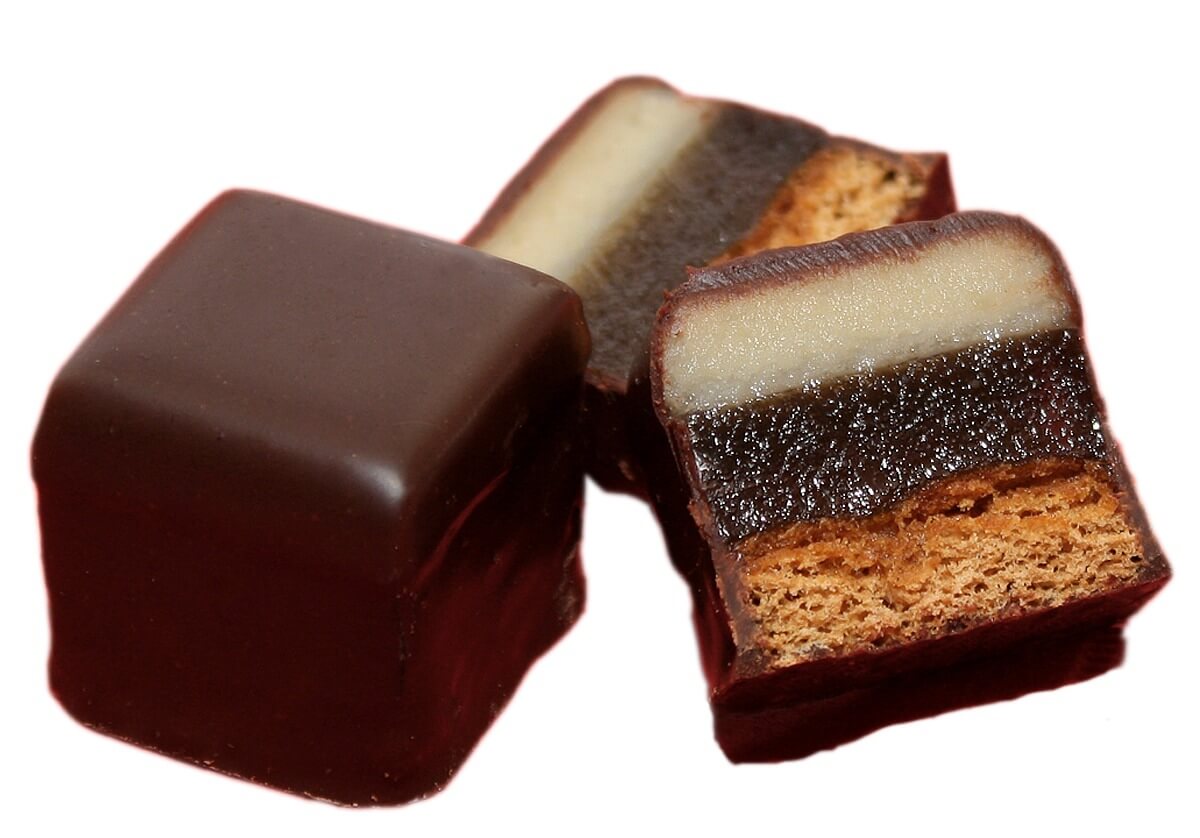 Persipan is a similar but less expensive product, in which the almonds are replaced by apricot or peach kernels. Many confectionery products sold as marzipan are made from less expensive materials, such as soybean paste and almond essence. To control and detect the authenticity of marzipan, polymerase chain reaction methods can differentiate almonds from substitutes and adulterants in concentrations lower than 1%. The German marzipan is made by grinding whole almonds with sugar and partially drying the pasta, and the French marzipan (called ‘masacreta’) is made by combining ground almonds with sugar syrup. Some marzipans are aromatized with rose water. The Spanish marzipan is made without bitter almonds. Marzipan without sugar can be made by replacing sugar with polyols such as maltitol.

The German name has largely expelled the original name in English marchpane with the same apparent derivation: “Pan de marzo”. (The word marchpane appears in Shakespeare’s Romeo and Juliet, Act 1, Scene 5, Line 9.) Marzapane is documented earlier in Italian than in any other language, and the meaning “bread” for bread is romance. The origin could be from the Latin term “martius panis”, meaning March bread. However, the final etymology is not clear; For example, the Italian word derives from the Latin words “Massa” (from the Greek Μάζα “Maza”) meaning bread and bread, which can be seen particularly in the Provencal massapan, the Portuguese maçapão (where ‘ç’ is a form alternative for the ‘ss’ phoneme) and the old Spanish marzipan – the change from ‘ss’ to ‘z’ in Latin words was common in Old Spanish and the ‘r’ appeared later.

However, it could also be derived from martis bread, March bread. Among the other possible etymologies exposed in the Oxford English Dictionary, one theory proposes that the word “marzipan” may be a corruption of Martaban, a Burmese city famous for its jars.

Another source could be from Arabic موثابان mawthābān “king who sits still”. Arabic, Latinized as matapanus, was used to describe a Venetian coin that represented an enthroned Christ the King. These coins were stored in ornate boxes. From around the fifteenth century, when the coins were no longer in circulation, the boxes were converted into decorative containers for storing and serving luxury sweets. One of those luxuries that got into the box in the sixteenth century is the famous almond-flavored marzipan, named (at least roughly) by the box in which it was stored.

However, if the marzipan has its origin in Persia, it is not unlikely that the name comes from Marzban (in Persian: مرزبان, derived from the words Marz مرز meaning “border” or “limit” and the suffix -bān بان which means guardian), a class of margraves or military commanders in charge of the border provinces of the Sassanid Empire of Persia (Iran) between the 3rd and 7th centuries. 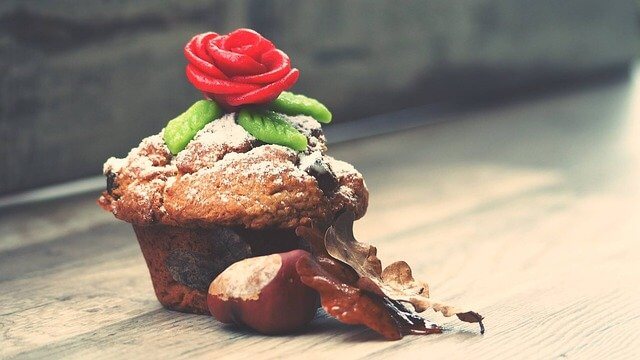 To produce marzipan, the raw almonds are cleaned “by sifting, elutriating air and other electronic or mechanical devices”, then immersed in water at a temperature just below the boiling point for about five minutes, in a process known as blanching . This loosens the skin of the almonds, which is removed by passing the almonds through rotating cylinders covered in rubber. This process reduces the concentration of hydrogen cyanide (HCN) and increases the water content. Then they are cooled, after which they are cut into thick and ground pieces, with up to 35% sugar, in almond flour.

The almond flour mixture is roasted and cooled, after which sucrose (table sugar) is added and possibly a binding agent such as starch syrup or sorbitol. Then it can be molded in any shape. The marzipan should be covered in an airtight container to prevent it from hardening and becoming dehydrated. It should be protected from direct light to avoid the rancidity of the almond oil, as a result of the oxidation of the lipids.