What is Lamaism? Information about the beliefs, history, influence and scriptures of Lamaism.

LAMAISM, an Occidental name given to the complex system of Buddhist teachings and devotional practices developed in Tibet. The word was derived from the Tibetan title lama (bla-ma), which Europeans usually apply to all members of the Tibetan Buddhist clergy. The Tibetan people, however, properly reserve this title for their ruler, the Dalai Lama, for abbots of monasteries, and for other high-ranking religious teachers famous for learning and sanctity. The title tra-pa ordinarily designates other members of a monastic community, although various ranks have specific titles. The distinctive form of Buddhism taught by the lamas to tra-pas and laymen is referred to in Tibet as chó. This comprehensive term is the Tibetan equivalent of the Sanskrit dharma, which ordinarily means “religion,” -“religious doctrine,” or the “teachings” of the great Indian sage Siddhártha Gautama (563?-?483 B.C.), more commonly known by his title, the Buddha.

Before Buddhism was brought to their country, the Tibetan people were devout followers of their ancient cult of Bon (Pon). Very little is known about the original form of this local faith, which, it is now assumed, may have resembled the shamanistic beliefs and practices of American Indians. Buddhism was more than 1,000 years old when it entered Tibet from two sources, Nepal and China, during the reign of King Song-tsen Gam-po (c. 620-650 a.d.). His two consorts—one a Nepalese princess, the other a Chinese princess—were Buddhists who had brought to Lhasa, the new capital of Tibet, Buddhist scriptures and images with their dowries.

The powerful Bon cult not only opposed the progress of Buddhism, but nearly suppressed it during this reign, which, however, was notable for a historic literary achievement of lasting significance. The spoken language of Tibet was, for the first time, given a literary form by the adaptation of an alphabet from an Indian script resembling Sanskrit. This made possible the subsequent translation of thousands of Indian Buddhist texts into the newly formed Tibetan literary language. 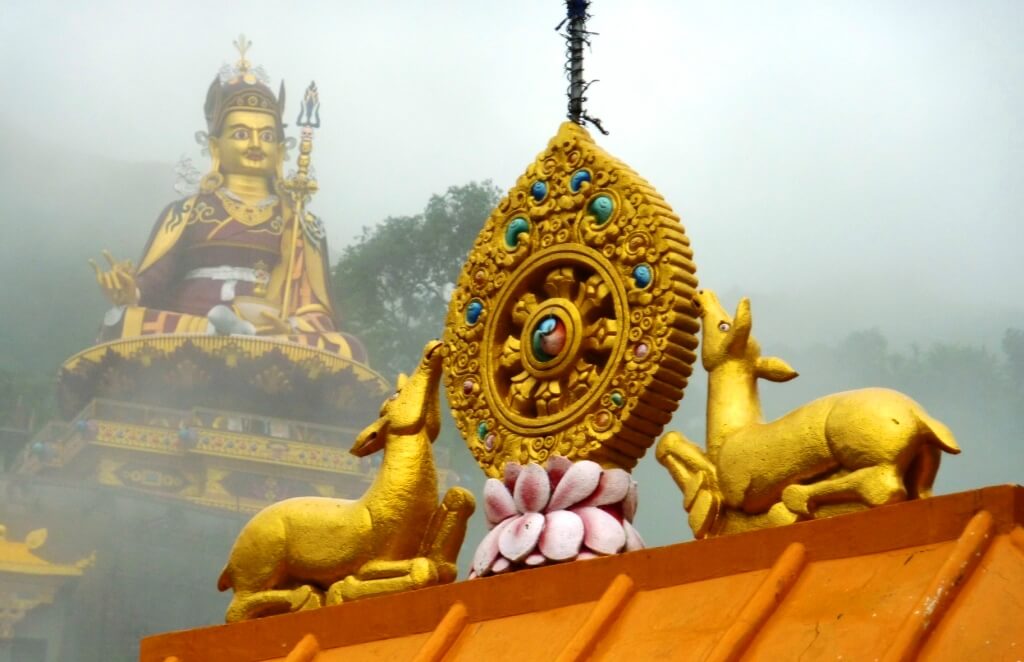 Almost a century later, Buddhism was revived by another Tibetan king, Ti-song De-tsen (r. c. 740-786), who was born a Buddhist. He established Buddhism on a firm basis by inviting the Mahayana Buddhist scholar Shanta Rakshita (áántiraksita) of Nálandá University—the Oxford of India—to become high priest of Tibet. At his recommendation the king invited another Indian Buddhist teacher, Padmasarhbhava, famous for his knowledge of yoga and tantric devotional techniques, to help establish a monastic curriculum for the training of Tibetan monks. The first important Buddhist monastery was built in 749 under the supervision of Padmasarhbhava and Shanta Rakshita, who became its first abbot. Buddhist monks from India were attracted to the monastery, and seven Tibetans were admitted as novices. Thus was founded the first Tibetan monastic order, the Nying-ma-pa. Padmasam-bhava’s most learned disciples subsequently translated many Indian Buddhist scriptures into Tibetan.

As Buddhism spread, other monasteries were built, and other monastic orders were founded. Atisha (Atîsa), an Indian Buddhist monk who arrived in Tibet in 1039, founded the Ka-dam-pa order as a reform movement to restore monastic discipline, temperance, and celibacy. His chief Ivork, Lamp on the Path to Saintly Perfection, is a short treatise in Sanskrit well known through its Tibetan translation. A few years later the Ka-gyu-pa order was founded by the Tibetan lama Mar-pa the Translator in order to transmit to chosen disciples certain esoteric tantric doctrines which he had received from his Indian teacher, Naropa. Mar-pa’s chief disciple, Mila-repa (Mila-raspa), became the most famous Buddhist hermit saint in Tibetan history. The Sa-kya-pa order, named for the Sa-kya monastery built in 1071, achieved renown for outstanding scholarship and meticulous translations of Indian Buddhist texts into Tibetan. In 1270 the Sakya lama Pak-pa became the first lama sovereign of Tibet, by authority of Kublai Khan, Mongol emperor of China.

Less than a century later a boy was born near Lake Koko Nor in northeastern Tibet (now in China’s Tsinghai Province) who was destined by his own efforts to become celebrated as the Second Buddha. Tsong-kha-pà (c. 1357-1419), also known later as the Precious Chief, studied the Buddhist scriptures diligently, wrote extensively, and instituted many monastic reforms based on the teachings of Atisha. This erudite lama and his chief disciples built the three great monasteries of Lhasa—Gan-den in 1409, Dre-pung in 1416, and Se-ra in 1419—which collectively house more than 16,500 lamas and tra-pas. The Ge-luk-pa (Yellow Hat order), which Tsong-kha-pa founded in 1409, is the predominating ecclesiastical system and ruling power in Tibet. The Dalai Lama, in his successive incarnations as head of the Ge-luk-pa, is the ruler of Tibet. The incarnation of the first Dalai Lama was discovered shortly after 1474. The 14th incarnation (b. June 6, 1935, enthroned 1940) assumed full power in 1950, when Red China invaded Tibet. When Tibetans rose against the oppressor the Dalai Lama fled to India, April 1959.

The traditional doctrines of Tibetan Buddhism include the ideals, teachings, and practices of three stages of Indian Buddhism: the early monastic Hinayana; the later popular Maha-yana; and the esoteric Vajrayana, a special development of Mahayana doctrines fused with tantric devotional techniques. The goal of Buddhism is to attain enlightenment. A learned lama will therefore become familiar with the teachings of all three yanas, but for the devout Tibetan layman Mahayana is the ideal path. The Buddhist of Tibet takes a practical view of his religion, which he realizes will help him in direct proportion to his exposure to it. He will therefore set aside a corner or a whole room in his home for his personal shrine. Images of the Buddha, of a famous teacher, or of a Buddhist divinity who functions as his personal guardian (yi-dam) and other sacred objects provide the spiritual atmosphere for performing his daily devotions.

These always include the “Threefold Refuge: in the Buddha, in the Doctrine, in the Clergy.” Then, and at other times during the day, he will repeat on each bead of his 108-bead rosary Om mani padme Hum—the six-syllable invocation to Chen-re-zi (Avalokitesvara), the Lord of Compassion incarnate in the Dalai Lama. The sacred paintings and images on the shrine are focal points for meditation on the attributes of moral perfection, compassion, and wisdom. In this manner a Tibetan keeps his feet on the path and acquires karmic merit in this life in preparation for his next incarnation. It must be noted, however, that the Tibetan monk or layman does not pray to images. His devotions are performed to give his life spiritual energy, direction, and resolution.

The universe, according to Tibetan Buddhism, is governed by cosmic law: all effects have causes, and one’s character in any incarnation is the sum total of thoughts and acts in previous incarnations. This knowledge is part of the cultural heritage of Tibet and is implied in all of its sacred texts. The Tibetan people have no difficulty understanding the doctrines of karma (action in one life with moral consequences in the next life) and rebirth (the existence of an evolving human being through successive incarnations). The presence of many incarnate lamas in Tibet, each recognized as the re-embodiment of Indian and Tibetan Buddhist saints, is reassuring evidence to a Tibetan of the truth in the doctrines of karma and rebirth. Tibetans, in common with other Buddhists, are not required by their religion to accept any doctrine or precept unless it is completely in accord with reason and experience. 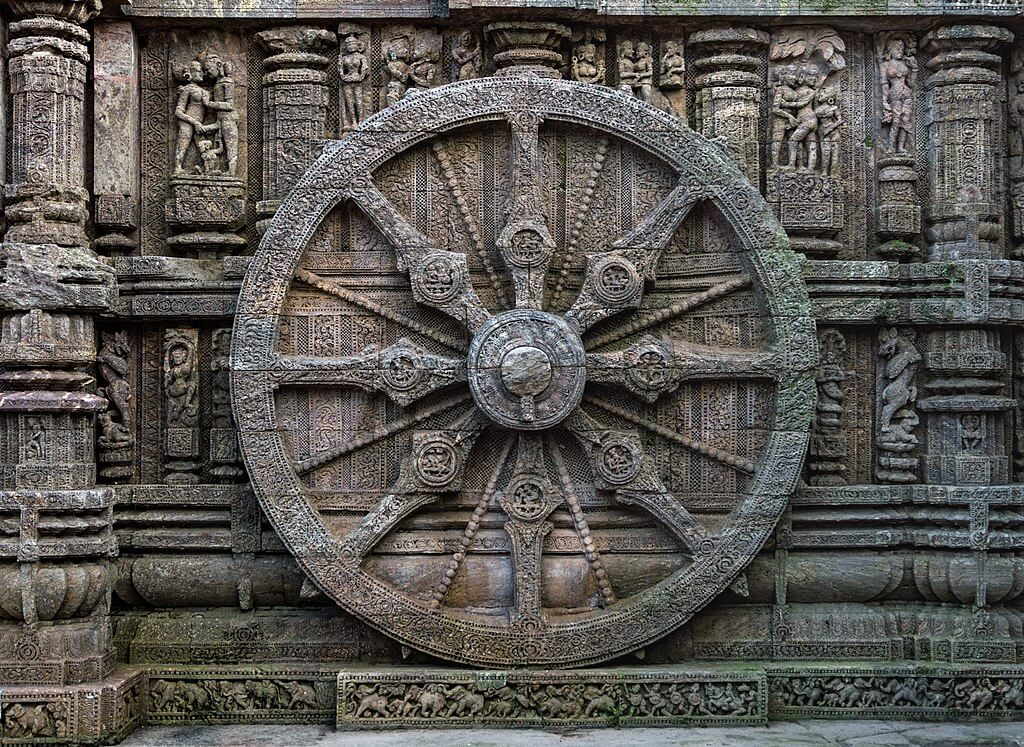 In the 7th century a.d. and between the 9th and 13th centuries many Indian Buddhist texts were translated into Tibetan through the joint efforts of Indian teachers and Tibetan monks. After extensive revisions the translations were arranged in two great collections : the Kan-jur, canonical scriptures attributed to the Buddha, or considered authoritative, in 100 or more volumes; and the Tanjur, expository treatises composed by later Indian Buddhist scholars, in no less than 225 volumes. Roth collections were compiled under the supervision of Bu-ston Rin-po-che (1290-1364), abbot of Sha-lu monastery. The collected writings of Tsong-kha-pa and his most learned disciples, of the Dalai and Panchen lamas, and of several other prelates renowned for their erudition are revered as important texts in the voluminous sacred literature of Tibet.

The all-pervading influence of Buddhist doctrines and practices in Tibet over many centuries ultimately formed its unique la-maistic culture. Every aspect of Tibetan life shows the impact of religious ideas. The Tibetan version of Buddhism also prevails in Mongolia, Manchuria, Sikkim, and Bhutan, and, to a lesser degree, in Nepal, northern India, northern and western China, and parts of the Soviet Union.