General and practical information about gears. Gears types, functions of gears, how do gears work. 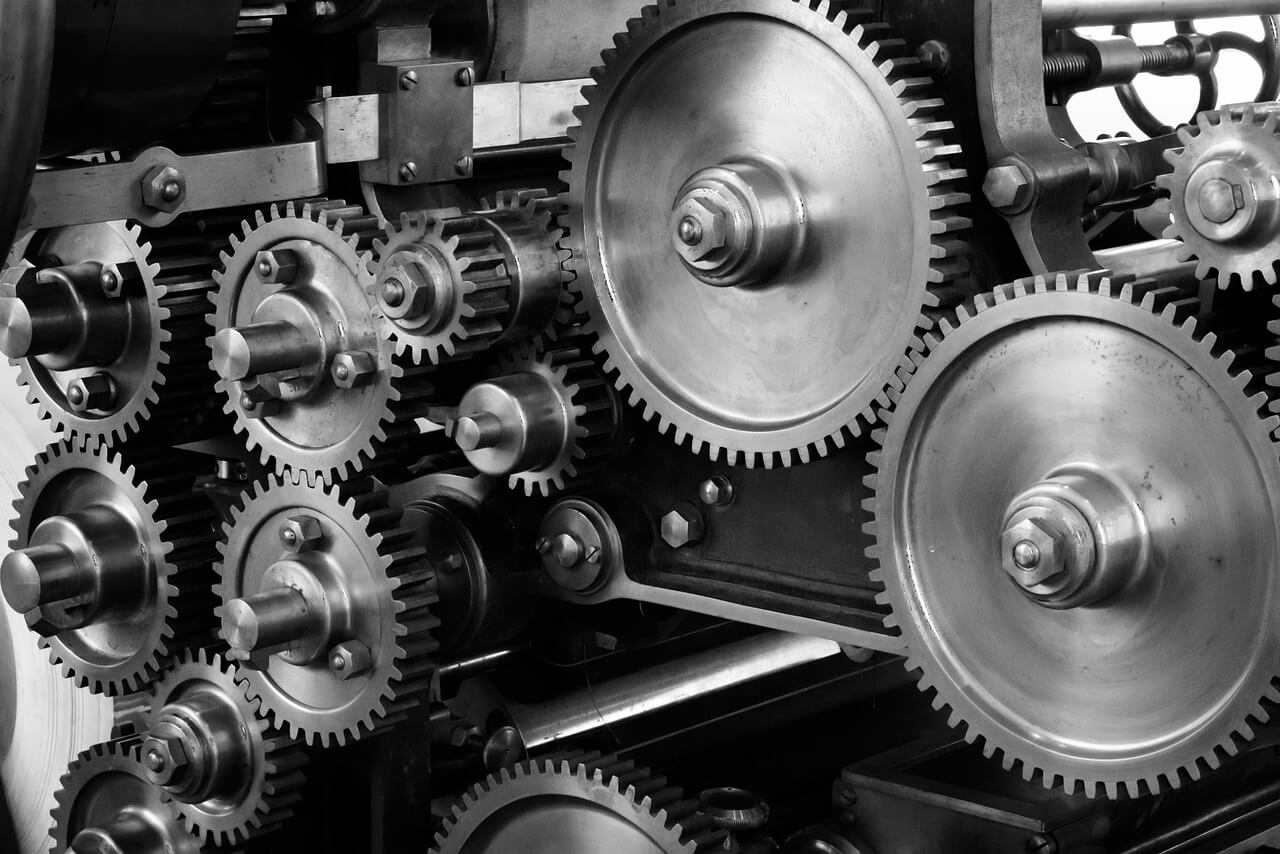 Gears are toothed wheels in machinery used to make one shaft turn another. It is often necessary that a machine should run faster or slower than the engine or motor driving it, and this can be done by means of gearing. The cam-shaft of a motor-car or a motorcycle engine, for example, is linked with the crankshaft by means of gearing, so that it turns at half the speed of the crankshaft.

One of man’s earliest discoveries was the wheel, and most gearing depends on wheels. In belt gearing, a pulley on one shaft drives a pulley on the other shaft by means of an endless belt stretched aıound the two. If the effort needed to turn the second pulley is very great the belt will slip, and this led to the introduction of chain gearing in which toothed wheels take the place of the pulleys and a chain that of the belt. Examples of chain gearing are found in the bicycle and most lawn mowers.

If the rims of two wheels are touching, then as one wheel is turned it will turn the other. The first wheel is called the driver and the second the follower. If the follower is difficult to turn there will be slipping, and to avoid this the rims of the two wheels are cut with teeth so that they will gear into one another. The two gearwheels (as they are called) are said to be in mesh with one another.

If the driver has 80 teeth and the follower 40, then since the two are in mesh the follower must turn twice each time the driver turns once. In other words, it will run at twice the speed of the driver. The relation between the speeds of the two is called the gear ratio.

In the simple case just described, the follower goes round the opposite way to the driver, though this does not happen with belt and chain drive. The follower can be made to turn in the same direction as the driver by separating the two and having a third gearwheel called an idler in mesh with both. The number of teeth on the idler does not affect the gear ratio.

The simplest type of gearing is that in which one shaft drives another parallel to it by means of spur gears. If, however, it is required to “take the drive round a corner”, that is, from one shaft to another in the same plane but at an angle to it. (If the angle is 900 and the gearwheels the same size, this is called a mitre gear.) When one shaft must be driven from another not in the same plane, worm gearing may be used. The worm acts like a screw meshing with the teeth of the wormwheel.

When the teeth are cut parallel to the axis of the wheel the whole of the tooth on the driver meets the whole of the tooth on the follower at the same instant, and does so with a distinct shock which causes wear and noise. To avoid this, helical gears with their teeth cut at an angle to the axis are used. With this arrangement, each tooth comes gradually into mesh and the shock and noise of the gears engaging are greatly reduced. Helical gears are used in motor cars and between the steam turbines of a ship and its propeller shafts.

The exact shape of the gear teeth themselves is very important, for, if the gears are to run quickly and smoothly, the teeth must roll upon one another without slipping as they meet. The shape has to be worked out carefully by geometry and the teeth are then cut or ground to shape by special machine tools.

If gears run for long periods or are used to drive heavy loads they need oil to prevent them from growing hot and wearing quickly. In some cases, such as the gearbox of a motor car, this is done by enclosing the gears in a box partly filled with oil, but in very high-speed machinery it may be necessary to pump a stream of oil on to the gears.

Many bicycles have a three-speed gear. The high gear is used for going fast along the level, the middle gear for climbing moderate hills and the low gear for steep uphill work. When climbing a hill in low gear, although your feet may push the pedals round at the same speed as when in high gear, the bicycle goes much slower. Nevertheless, it climbs the hill, whereas in high gear you would not be able to make it do so.