What does a flicker bird look like? The features, characteristics, feeding of flicker bird. Information About Flicker Bird 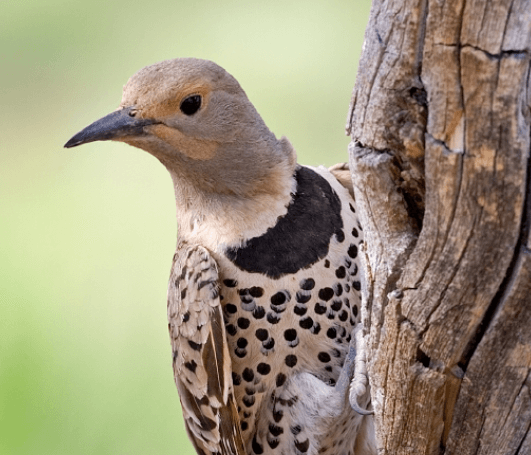 Flicker; any of a genus of medium-sized American woodpeckers that have brown backs, white rumps, and heavy black crescents on the breast. The yellow-shafted flicker (Colaptes auratus) nests from Louisiana and Florida to the timber-line in Alaska and northern Canada and winters in all but the northernmost of the Eastern states. This species is replaced by the red-shafted flicker (C. cafer) in the West and in much of Mexico and Central America and by the gilded flicker (C. chrysoides) in the deserts of the Southwest. Three other species occur in South America.

Flickers have long, heavy bills and stiff tails characteristic of the woodpecker family. They also have the deeply undulating flight of most woodpeckers, but when flickers fly overhead, they are easily recogiiized by their conspicuous golden underwing and undertail surfaces (salmon-colored in the red-shafted flicker). The male also has a moustache stripe that is black in the yellow-shafted flicker but red in most species.

In March or April and in September or October, 50 or more flickers can be seen in a single morning flying along the shores of the larger lakes and rivers or along mountain ridges. Unlike woodpeckers, flickers spend much time on the ground, feeding on ants. They are named for their “song,” a repeated flick-er or flick. They also give a loud call and drum on resonant hollow limbs and eaves troughs during the mating season in the spring and early summer. Flickers lay from 4 to 10 white eggs in a tree or cactus cavity or occasionally in a nesting box.

Flickers make up die genus Colaptes in the family Picidae of the order Piciformes.