What is a deer animal look like? Information about classification, anatomy, features and facts of deer animal.

Deer; are a family of herbivorous, hoofed mammals found in a variety of habitats throughout the world. They are native to North and South America, Europe, Asia, and northwestern Africa and have been introduced into Australia, New Zealand, and a number of other island areas. Their fossil record traces back to early Oligocene times, about 35 million years ago.

Members of the deer family have long been utilized by man as a source of meat and hides. Prehistoric man left behind piles of deer bones that testify to the importance of these animals in his diet. Even in modern times, at least one species of deer functions as the basis of a people’s economy. The Laplanders in northern Europe depend upon the reindeer (or caribou) for meat, milk, and hides and as a beast of burden. The Eskimo of North America are also heavily dependent upon this deer.

Deer serve as big game in sport hunting in many parts of the world. In the United States, government employees trained in wildlife management constantly maintain high deer populations for the demands of recreational hunting. 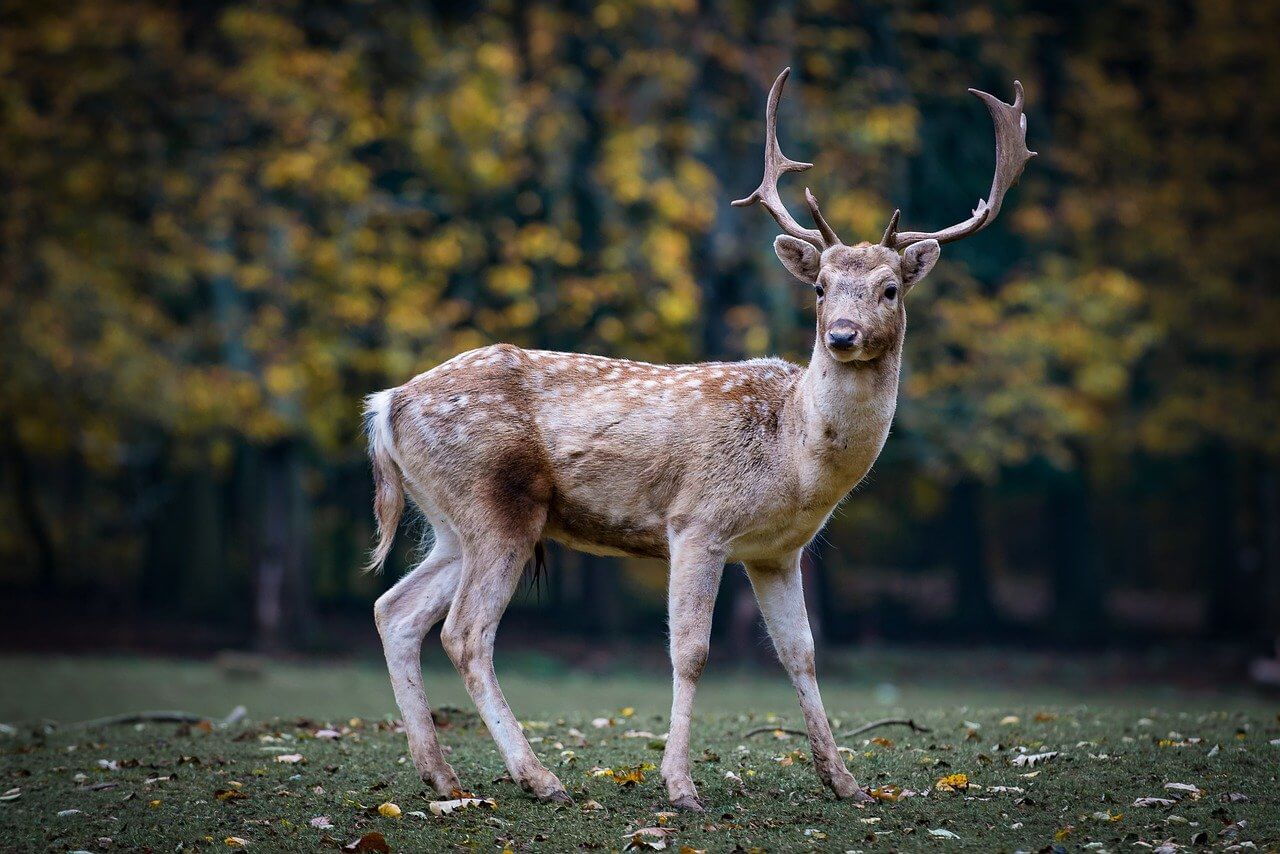 Like their relatives the cattle, deer are ruminant (cud-chewing) animals with four-chambered stomachs. They have 32 to 34 teeth, with the upper incisors always absent, and four toes on each foot. All species except the musk deer lack a gall bladder.

Deer are distinguished from cattle chiefly by the presence of bony antlers, instead of horns, in the males of most living species. Anders are shed and regrown annually from a bony base (the pedicel) that develops on each of the paired frontal bones of the skull. During their growth, the antlers are covered with “velvet,” a haired skin that is well supplied with blood vessels. After three to five months the velvet dries and is rubbed off by the deer, a process referred to as “polishing the antlers.” A few weeks or months later, after the breeding season, the antlers are shed. Antlers are used in oombat between deer and in defense against predators. Recent research suggests that antlers may also have the important function of acting as heat radiators for the elimination of excess body heat.

The deer make up the family Cervidae in the order Artiodactyla. The living forms are generally divided into 32 species, grouped into 16 genera, and placed in 4 subfamilies: Moschinae, Cervulinae, Cervinae, and Odocoileinae.

This subfamily, the musk deer, occurs only in eastern and central Asia and is the most primitive living deer. The only known species, Moschus moschiferus, is a small antler-less animal, 20 to 24 inches (50-60 cm ) high at the shoulders. Its upper canines are enlarged into tusks, which are especially pronounced in the males, who also possess a well-developed abdominal musk gland. 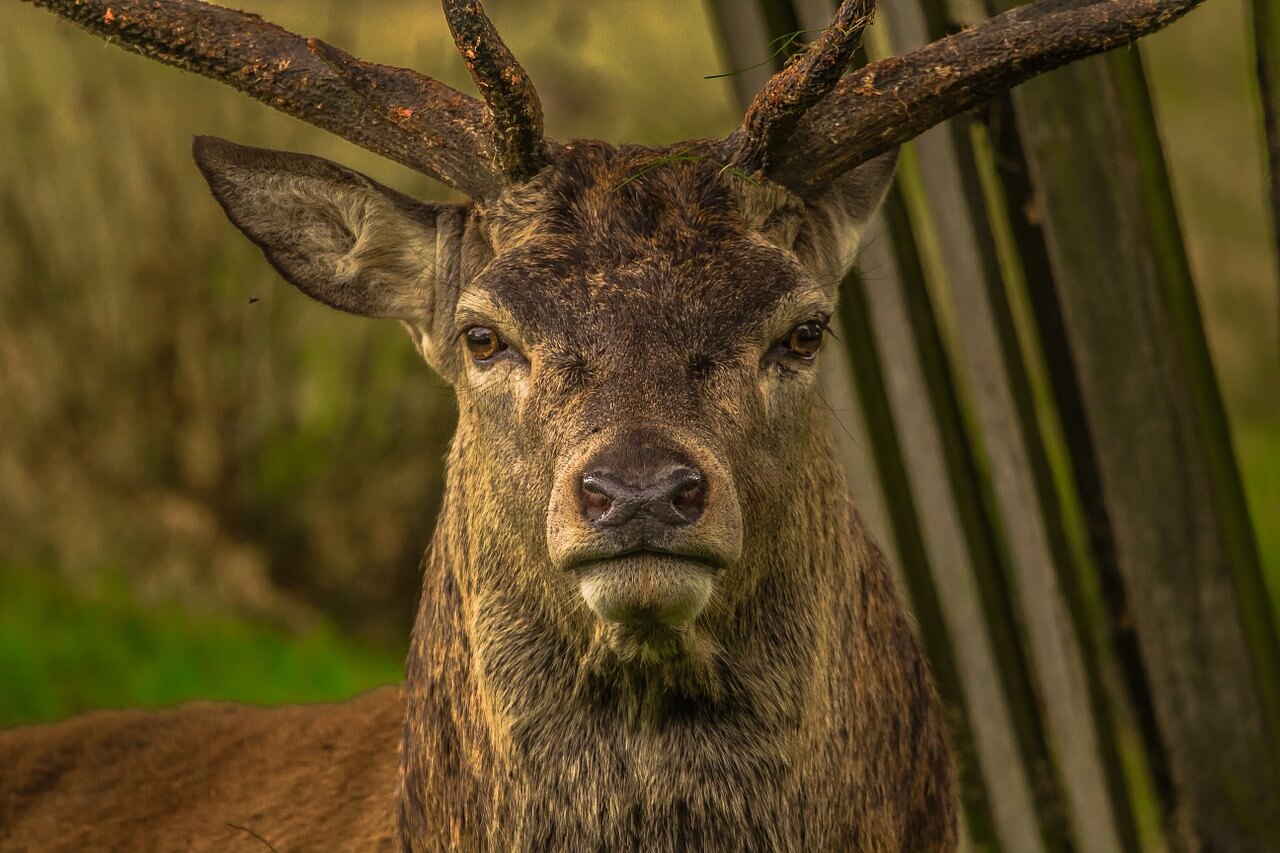 The cervulinids, or muntjacs, of southeastern Asia, generally resemble the musk deer in size and in the presence of upper incisor tusks in the males. Unlike the musk deer, however, muntjacs have small palmate (flattened) antlers borne on long pedicels.

The cervinids comprise 12 species grouped into 3 genera found in Europe, Asia, and North and South America. Some cervinids occur over a wide geographic area and vary in form and color from region to region. Because these geographic variants are often given distinct names and different names are often applied to the same deer, considerable confusion in species identification has resulted.

The red deer of England (Cervus elaphus) is an extreme example. On the Algerian-Tunisian border it is called the Barbary stag; in northern India, the Kashmir stag, “barasingha,” or hangul; in Turkey, Iran, and the Caucasus Mountains region of the Soviet Union, the maral; in eastern Turkestan (China), the Manchurian wapiti, North African red deer, or Yarkand stag; and in Tibet and Afghanistan, the shou.

An additional complication is the North American elk, or wapiti (C. canadensis), which is so closely related to the red deer that many zoologists believe it is simply another geographic variant. The use of the name “elk” for this animal compounds the confusion because another deer, Alces alces, the “moose” of North America, has long been called the elk in the Old World.

The subfamily’s remaining two genera, Ela-phurm and Platycercos (formerly Dama), are each represented by a single species. Pere David’s deer (Elapnurus davidianus) formerly inhabited northeastern China but now exists only in zoological gardens. The fallow deer (Platycercos dama), native to southern Europe, has been widely introduced and can be found in the wild state in western Europe, Great Britain, and the United States. 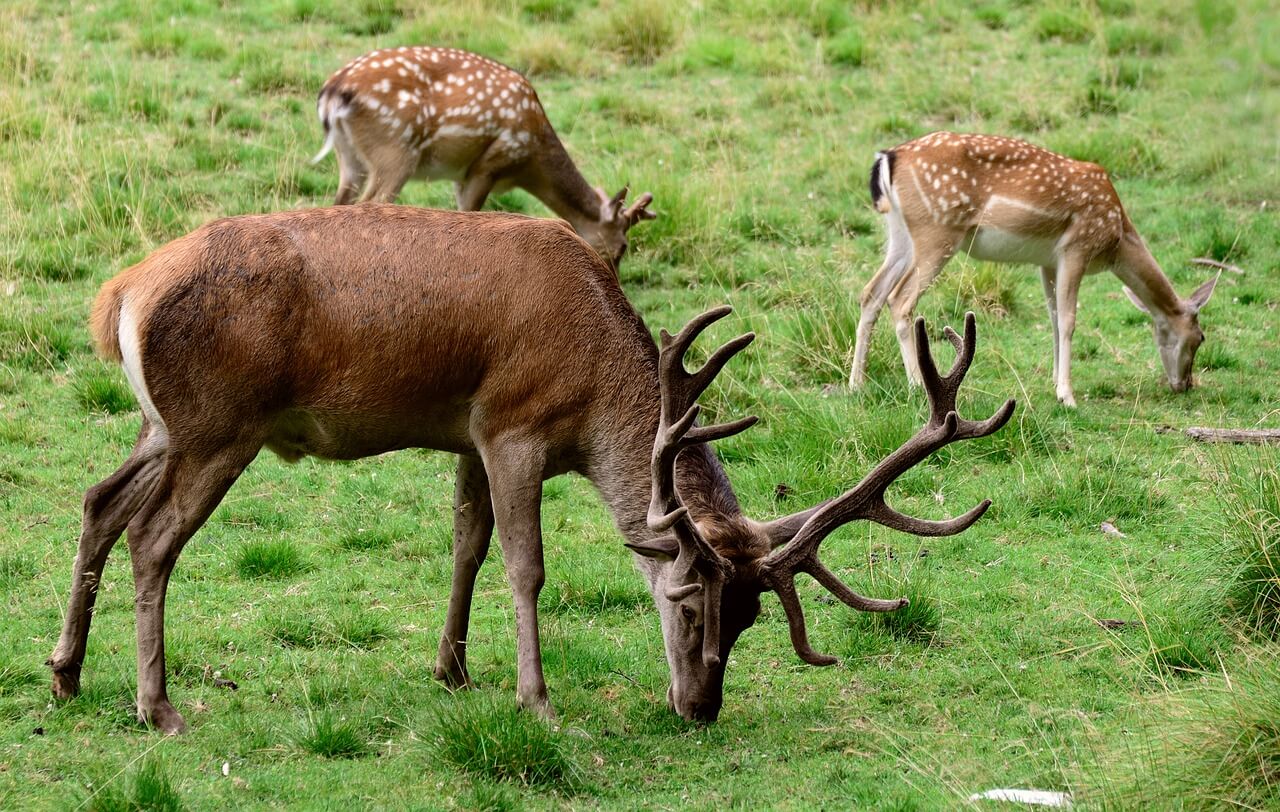 This subfamily, found in Europe, Asia, and North and South America, contains 13 species grouped into 10 genera.

The moose, or Old World elk (Alces alces), is the largest of the deer and occurs in the northern areas of Asia, Europe, and North America. It is generally associated with the northern coniferous evergreen forest.

The caribou, or reindeer (Rangifer tarandus), is also found in northern Europe, Asia, and North America, but it generally lives farther north than the moose.

The roe deer (Capreolus capreolus) are small deer, about 24 inches (60 cm) high at the shoulders, widely distributed from Britain to eastern Asia. They have the longest gestation period of any deer, about 10 months, because they are the only ones in which delayed implantation occurs: after fertilization, the egg normally lies dormant in the uterus for a period of about 4,5 months before continuing its development.

The Chinese water deer (Hydropotes inermis) is unlike the other members of the subfamily Odocoileinae in that the males lack antlers but possess upper canine tusks, similar to the primitive musk deer subfamily. The Chinese water deer bears the greatest number of young of all the deer, occasionally producing as many as seven at a time.

The mule, or black-tailed, deer (Odocoileus hemionus) inhabits the mountains of western North America from the southern Yukon and western Minnesota to northern Mexico. The white-tailed deer (O. virginiana) occurs from southern Canada through most of North and Central America into northern South America.

The red brocket deer (Mazama americana) is found from southern Mexico to northern Argentina; the brown brocket deer (M. gouazoubira) occurs from Central America to Argentina. Both brocket deer are about 20 to 27 inches (50-65 cm) high at the shoulders and have short, un-branched antlers.

The marsh, or swamp, deer (Blastocarus dichotomus) inhabits wooded areas along streams from northern South America to Argentina. Reaching 48 inches (120 cm) high at the shoulders, the marsh deer is the largest of the South American cervids.

The pampas deer (Blastóceros bezoarctas) lives on dry, open plains in Brazil, Paraguay, Uruguay, and Argentina. It has well-developed scent glands between the toes of its hind feet that secrete a penetrating, disagreeable odor.

The Peruvian huemul (Hippocamelus anti-sensis), also known as the guemal, occurs at elevations of 11,000 to 16,000 feet (3,300-4,900 meters) on the slopes of the Andes Mountains. The male’s antlers are two-tined, formed by a single fork close to the base. The Chilean huemul (H. bisulcus) is found from central Chile to the southern end of South America.

The smallest of the true deer, the pudu (Pudu pudu) inhabits the Andes from Ecuador, Peru, and Bolivia to southern Chile. It has short legs and tail, and its antlers are tiny and spikelike.