When was Carmen first produced? Who composed Carmen? Information about the libretto and the music of the Georges Bizet’s Carmen Opera.

Carmen; is an opéra-comique composed in 1873 and 1874 by Georges Bizet, with libretto by Henri Meilhac and Ludovic Halévy. The work is based on Prosper Mérimée’s novel of the same name, dealing with Gypsy life and first published in 1847. 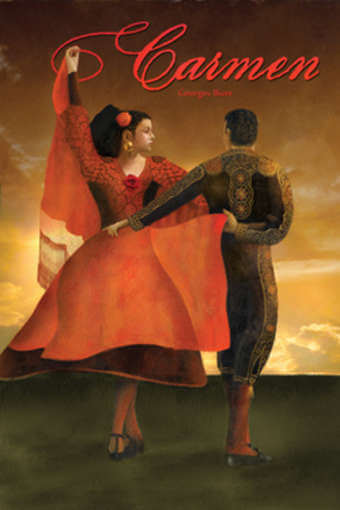 Carmen was first produced at the Opéra-Comique in Paris on March 3, 1875. Its reception by the public and the press was cool. Its story of tragic illicit love was considered scandalous in a theater known for propriety and happy endings, and the music was condemned as dull, noisy, and tuneless.

The success of the opera dates from its production in Vienna in October 1875, and Carmen has since become a universal favorite with public and singers alike—one of the most popular operas in the French repertoire. (Famous singers of the title role have included Marie Galli-Marié, Minnie Hauck, Emma Calvé, and Risë Stevens.) Carmen is also the acknowledged masterpiece of opéra-comique, a form that is not the same as comic opera but implies an action and characters founded on everyday life, with spoken dialogue replacing the recitative of grand opera.

The libretto, in which Bizet had a hand, ranks very high, although it has been criticized for introducing Micaela, a character not in the novel, as a foil to Carmen, and for the development of Mérimée’s shadowy Lucas into the bullfighter Escamillo. But both of these figures throw the main characters, Carmen and José, into high relief and strengthen the theatrical impact of their conflict. Carmen’s fascination remains undimmed, and the gradual deterioration of José from the simple peasant to the desperate outlaw and murderer is managed with exceptional skill.

The music of Carmen is distinguished by rhythmic vitality, picturesque and subtle orchestration, irresistible melody, and above all by Bizet‘s ability to project himself into the sufferings of his characters. Whereas earlier opéra-comique had been superficial, sentimental entertainment, Carmen is a drama of unlimited passion expressed with a classical detachment and refined technique that owe much to Bizet‘s favorite composer, Mozart. In Bizet‘s Carmen the cool, ironic tone of Mérimée’s novel found its operatic counterpart.