What is the structural principle of the arch? Information about arch forms, history of arch construction.

ARCH, a structure composed of wedge-shaped stones, called voussoirs, and designed to span a void. The center stone at the apex or top of an arch is the keystone. The keystone is often emphasized architecturally, but from a structural point of view it is no more essential than any other voussoir. Indeed, in many Gothic arches there is no keystone; two voussoirs simply meet in a joint at the apex of the arch. The two voussoirs that begin the curve at each end of the arch are the springers.

They rest on the imposts, the points of apparent support. The impost is generally emphasized by a block of stone that is given special treatment. The undersurface of an arch is called the soffit or intrados; the outer curve is the extrados. The haunch, where the thrust of the arch is usually greatest, is at a point located about one third the distance between the springer and keystone. 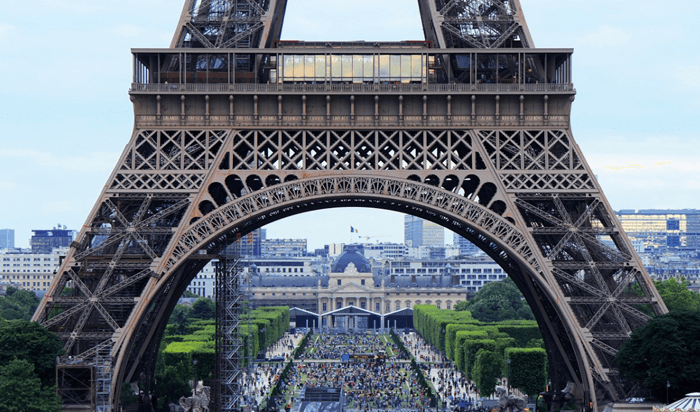 Structural Principle of the Arch.

While an arch is being built, formwork or centering is required to support the voussoirs. When the arch is completed, the centering may be removed, because the wedge-shaped voussoirs cannot fall without pushing aside their neighbors. In other words, the voussoirs transform the vertical pull of gravity into a diagonal force known as thrust, or lateral thrust.

The thrust must be overcome or the arch will collapse. It can be resisted by setting another similar arch against the first so that each presses against the other, as in an arcade. However, an arcade must eventually end, and at that point a buttress or buttressing is needed. A buttress is a mass of material heavy enough to absorb, through inertia, the diagonal thrust brought to bear upon it; in effect, it bends the diagonal thrust into a nearly vertical force. The arch is presumed to be safe if the resultant of the diagonal thrust of the arch and the vertical force of gravity of the buttress itself falls within the inner third of the buttress’s thickness at ground level.

Arches can be built in many shapes. The most common is the semicircular or round arch. In Islamic architecture, horseshoe arches, consisting of more than a semicircle, are common. An arch of less than a semicircle is a segmental arcii. It is even possible, using vous-soirs, to construct a flat arch whose soffit is horizontal. If an arch rises vertically above the impost before the curve begins, the arch is said to be stilted. Gothic architecture uses many stilted arcnes.

A full colonnette sometimes separates the impost from the springer that begins the curve of the arch. The pointed arch is a common feature ot Gothic and some Islamic architecture. The centers of the two curves of a pointed arch are most commonly at the springer, creating an equilateral arch. If the centers are set outside the arch, the point becomes more acute—a lancet arch. If the centers are within the arch, an obtuse point and a blunt arch are the result.

Elliptical or three-centered arches have sharp curves at the sides joined by a flatter curve in the center. In the late Gothic period, the four-centered arch came into favor; it has sharp curves at either side and flattish curves between, leaving a very blunt point at the apex. The late Gothic also made use of the ogee arch, with reversed curves at either side. A structural tour de force, the ogee arch must be relatively small. Finally, there are parabolic arches, which appeared first in Persia during the Sassanian period. In modern architecture the parabolic shape is frequently used for curved concrete slabs which, however, are not’ true arches because they are monolithic and involve no thrust. 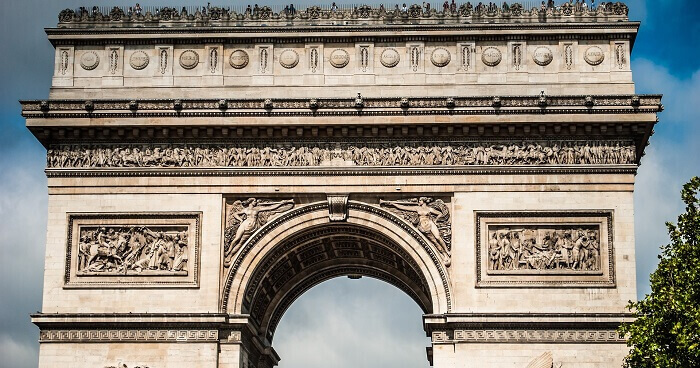 The principle of the arch was known to most early civilizations. The Egyptians used arches only in utilitarian buildings such as the granaries behind the Ramesseum at Thebes. Their obsession with the idea of permanence probably made the Egyptians distrust the arch, which can, of course, collapse if the buttress supporting the thrust is ever weakened. “The arch never sleeps,” says a Greek proverb, referring to the eternal force of the thrust.

Lack of stone and timber forced the Meso-potamians to use brick and, consequently, a form of arched construction, because brick cannot span a void unless it is used as an arch. However, sun-baked brick is not strong and Mesopotamian arches were generally small, even in palaces of vast dimensions.

Roman builders were the first to exploit fully the possibilities of arch construction, which they inherited from the Etruscans. They also developed the vault—an extension of the principle of the arch to cover an area rather than a line. The impressive remains of Roman stone aqueducts may still be seen marching arch upon arch across the Roman countryside, in the Pont du Gard near Nimes, France, and at Segovia, Spain. The Romans also built great triumphal arches such as those in Rome honoring the emperors Titus, Septimius Severus, and Constantine.

The construction of the later Middle Ages was dominated by the arch and vault. The early Christian basilicas, with their light arcades carrying thin walls and timber roofs, were superseded in the 11th and 12th centuries by great vaulted churches with transverse arches or ribs at intervals below the vault, and massive arcades to hold the thick walls. These arcades were often several stories high, each story having wider arches than the story below. 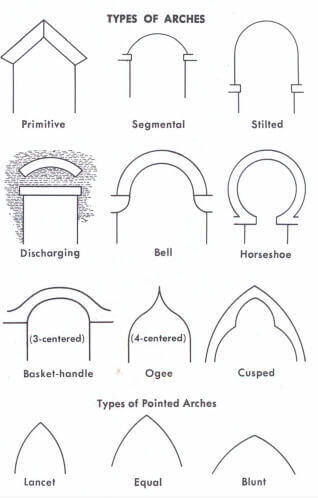 The most dramatic Use of the principle of the arch is found in Gothic architecture. Buildings became skeletons of stone, with slender piers holding the pointed arches of the arcade, and above the arcade light vaults with a network of ribs. All openings—windows, doors, or the vast open spaces of the interior—were topped by I pointed arches and the vaults they carry. An elaborate buttressing system was necessary to support these soaring arches and vaults. Spur walls were built at right angles to the church outside the aisles, with flying buttresses rising from them above the aisle roofs to support the nave vaults. The arch and vault construction of Gothic buildings made it possible to pierce the walls with large windows of stained glass. Architects of the Renaissance and later periods rejected the pointed Gothic arch, which they associated with barbarism, and brought the round Roman arch back into favor.