List of idioms with the word “Hit” and the meanings. Idioms about “Hit” and expressions. 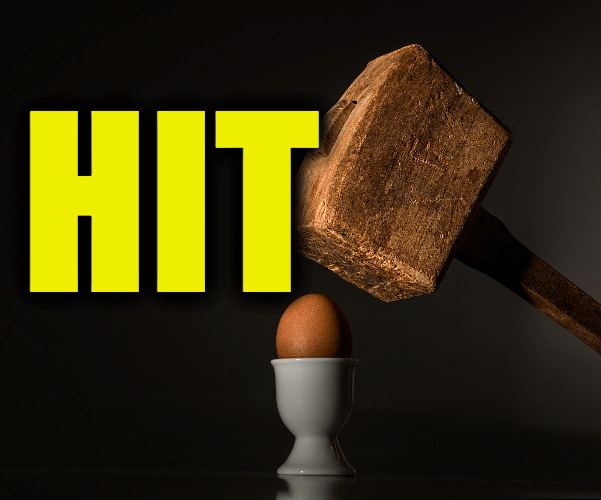 Hit (someone) below the belt

to act unfairly
1. John told Robert about the job he was planning to apply for and Robert went out and got it himself! Robert doesn’t play fair. He hits below the belt.
2. Mary introduced Sally to her boyfriend, Mike, and before she knew it, Sally and Mike were dating. That was below the belt.
The expression originates from the sport of boxing, in which it is against the rules to hit one’s opponent below his or her belt.

Hit (someone) on the nose

to do or understand something perfectly
1. That’s the right answer! You really got it on the nose.
2. Joannie’s argument made perfect sense to me—she really hit it on the nose.

unplanned or random; equally likely to succeed or fail
1. Sometimes Ann is at home when I drop by to visit her, and sometimes she’s not. It’s hit or miss catching her at home.
2. The repairman’s work is hit or miss. Sometimes the machine works when he’s finished fixing it, and sometimes it doesn’t.

to find something of great value
1. They invested their money in oil wells in Texas and they hit pay dirt. Now they’re the richest people I know.
2. Chuck went off to Alaska looking to hit pay dirt, but I don’t think he’s going to find what he wants. Everything worth finding has already been claimed.
3. The senator’s enemies started to investigate his past in the hopes of finding something scandalous. They hit pay dirt when they uncovered his driving record and found that he had been arrested for drunk driving.
Synonym: strike it richCompare to: hit the jackpot
The expression originates from the mining and gold-rush days when a person could become rich if he or she found dirt with gold in it.

to get rich or find something of value
1. Mabel always bought one lottery ticket in the hopes that one day she would hit the jackpot and never have to work again.
2. I went to the library not expecting to find any of the books that were on my list, but I hit the jackpot. I managed to find all seven of them.
Synonym: hit pay dirt
The expression originates from gambling, in which the jackpot is the money collected from the gamblers and divided among the winners.

Hit the nail on the head

to go to bed
1. I’m really tired—I can’t keep my eyes open any longer. I’m going to hit the sack.
2. After a hard day, Richard decided to hit the sack even though it was only 8:00 p.m.

to satisfy in just the right way
1. The boys were sweating from planting trees in the hot sun. When their mother brought them some cold lemonade to drink, it really hit the spot.
2. I think I’d like something to eat after the theater. A little light supper after the play will just hit the spot.
Compare to: fill/fit the bill
The expression is often used in reference to food or drink.

to run into a problem. (Informal.)
We’ve hit a snag with the building project.
I stopped working on the roof when I hit a snag.

to reach the lowest or worst point. (Informal.)
Our profits have hit bottom. This is our worst year ever.
When my life hit bottom, I began to feel much better. I knew that if there was going to be any change, it would be for the better.

hit it off with someone and hit it off

to quickly become good friends with someone.
Look how John hit it off with Mary.
Yes, they really hit it off.

to discover or think up something. (Informal.)
Ann hit on the idea of baking lots of bread and freezing it.
John hit upon a new way of planting corn.

hit one where one lives and hit one close to home

hit someone between the eyes

to become completely apparent; to surprise or impress someone. (Informal. Also with right, as in the examples. Also used literally.)
Suddenly, it hit me right between the eyes. John and Mary were in love.
Then—as he was talking—the exact nature of the evil plan hit me between the eyes.

to ask someone for something. (Informal.)
John hit me up for a loan.
I told him to go hit up someone else.

to begin to study; to study. (Slang.)
Well, time to hit the books. □ John, if you don’t start hitting the books, you’re going to fail.

to start walking;to go out into the streets. (Slang.)
If you want to get a job, you had better get out there and hit the bricks.
I got fired today. The boss came by and told me to hit the bricks.

hit the hay and hit the sack

to go to bed and get some sleep. (Slang. Compare to sack out.)
Look at the clock. It’s time to hit the hay.
I like to hit the sack before midnight.

to decline; to decrease in value. (Slang.)
Business usually hits the skids in the summer.
Tom hit the skids after he lost his job