List of idioms with the word “Break” and the meanings. Idioms about “Break” and expressions. 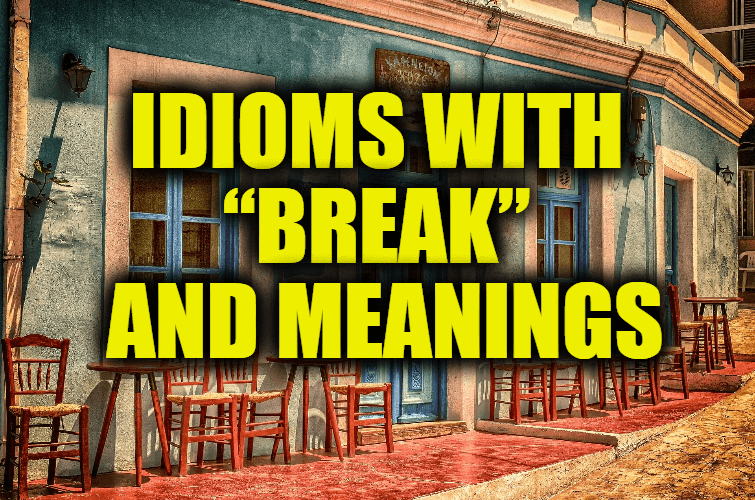 to get things started, particularly by means of a social introduction or conversation
1. It didn’t take long for the guests at the party to break the ice. By the time dinner was served, almost everyone was chatting with someone they had just met.
2. I’m afraid we haven’t met. Let me break the ice by introducing myself. My name is John Taylor.
The expression suggests the idea of breaking through an icy surface to clear a path for ships.

to be the deciding factor in whether something succeeds or fails
1. The Smiths were about to sell their house, but the buyers didn’t like the color. The Smiths decided to give it a new coat of paint at no extra cost, in case painting the house might make or break the deal.
2. Susan decided to study for the test through the night. She knew that her grade on this test would make or break her chances of getting admitted to graduate school.

break away from someone or something

to close down a campsite; to pack up and move on.
Early this morning we broke camp and moved on northward.
Okay, everyone. It’s time to break camp. Take those tents down and fold them nearly.

1. to fall apart; to stop operating.
The air conditioning broke down, and we got very warm.
The car broke down in the parking lot.
2. to lose control of one’s emotions; to have a nervous collapse.
He couldn’t keep going. He finally broke down and wept.
I was afraid I’d break down.

for income to equal expenses. (This implies that money was not earned or lost.)
Unfortunately my business just managed to break even last year.
I made a bad investment, but I broke even. break ground for something and break ground to start digging the foundation for a building.
The president of the company came to break ground for the new building.
This was the third building this year for which this company has broken ground.
When will they break ground?

break in on someone or something

break into something and break

in to enter into a place (illegally) by the use of force.
The robber broke into the house.
If the door had been left unlocked, he wouldn’t have had to break in.

break loose from someone or something

and break loose to get away from a person or a thing which is holding one.
The criminal broke loose from the police officer.
It’s hard to break loose from home.
I was twenty years old before I could break loose.

break one’s neck to do something

1. See break out of something. 2. (for one’s face) to erupt in pimples.
Bob’s face has started breaking out badly.
My face breaks out when I eat a lot of chocolate.

break out in a cold sweat

break out in something

and break out to erupt with something such as a rash, a cold sweat, or pimples.
After being in the woods, I broke out in a rash. I think it’s poison ivy.
I hate to break out like that.
When I eat chocolate, I break out in pimples.

break out into tears

break out of something

and break out to force one’s way out of a place.
The criminal broke out of jail.
The lion broke out of its cage and terrorized the village.
I’ve always been afraid that the lion would break out.

break someone or something down

and break down someone or something
1. [with someone]to force someone to give up and tell secrets or agree to do something.
After threats of torture, they broke the spy down.
They broke down the agent by threatening violence.
2. [with something]to tear something down; to destroy something.
They used an ax to break the door down.
We broke down the wall with big hammers.

break someone or something in

break someone or something up

and break up someone or something
1. [with someone]to cause a person to laugh, perhaps at an inappropriate time. (Informal.)
John told a joke which really broke Mary up.
The comedian ‘s job was to break up the audience by telling jokes.
2. [with something]to destroy something.
The police broke up the gambling ring.
The storm broke the docks up on the lake.

to cushion a falling person; to lessen the impact of a falling person.
When the little boy fell out of the window, the bushes broke his fall.
The old lady slipped on the ice, but a snowbank broke her fall.

to cause someone emotional pain.
It just broke my heart when Tom ran away from home.
Sally broke John’s heart when she refused to marry him.

break something to pieces

to shatter something. (Informal.)
I broke my crystal vase to pieces.
I dropped a glass and broke it to pieces.

break the back of something

break the news to someone

the discovery of a solution to a problem.
The scientists working on cancer made a major break-through.

break up with someone

and break up to end a love affair or a romance.
Tom finally broke up with Mary.
I thought they would break up. He has been so moody lately.