List of idioms with the word “Apple” and the meanings. Idioms about “Apple” and expressions. 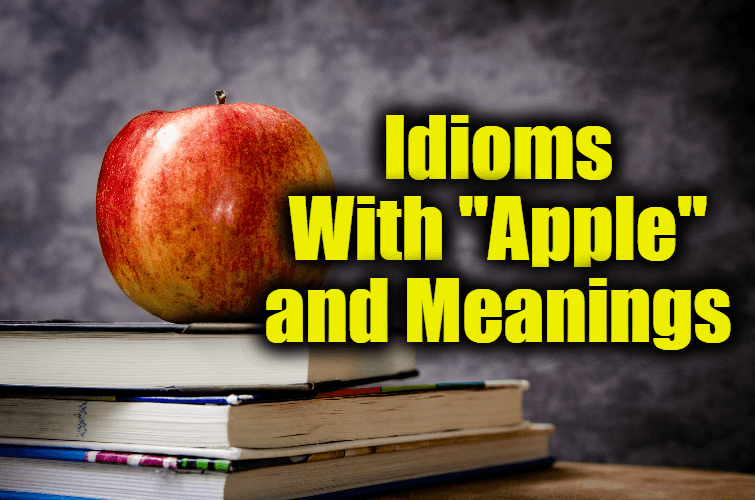 to disturb the status quo; to shake up the existing situation
1. Everyone is happy with the situation as it is. If you try to change it, you’ll be upsetting the apple cart.
2. The new president was installed and immediately upset the apple cart by appointing his own people to various positions in the administration. Similar to: rock the boat
Whereas rock the boat usually describes a situation in which the people involved do not want a change, upset the apple cart can be used to describe any situation. The expression dates back to the Roman Empire and was originally ‘upset the cart.’‘Apple’ was added by the late 1700s.

a person or thing that is precious or loved above all else
1. Richard is so attached to his daughter that he would do anything for her. She’s the apple of his eye.
2. The boy won’t behave in school, but you can’t convince his parents. He’s the apple of their eye.
Centuries old, this expression stems from the ancient belief that the pupil of the eye was solid and shaped like an apple. The pupil was considered precious since one could not see without it.

a specious thing- which disappoints.
The so-called “apples of Sodom,” as described by Josephus, had a fair appearance externally, but-when bitten dissolved in smoke and dust.
It will prove, when attained, a very apple of Sodom, dying between, the hand and the mouth. Like to the apples on the Dead Sea shore.
All ashes to the taste.—Byron.

to fold one of the sheets of a bed (removing the other) so as to make it impossible for the intending occupant to stretch his legs ; a common practical joke.
No boy in any school could have more liberty, even where, all the noblemen’s so ne are allowed to make apple-pie beds for their masters (disarrange the beds of their teachers).— Black more.

something which causes strife.

the projection in the neck under the chin,
Having the noose adjusted and secured by tightening above bis Adam’s apple. — Daily Telegraph

Fig. two entities that are not similar. (Used especially in reference to comparisons of unlike things.)

Fig. an often parodied sentiment expressed about allegedly quintessential elements of American home life. Fred is so old-fashioned. Everything about old times is good to him. He’s all motherhood and apple pie.

a single bad person or thing. There always is a rotten apple to spoil it for the rest of us. Tom sure has turned out to be the rotten apple.

as American as apple pie