Observers in the northern hemisphere hope to catch a glimpse of Comet NEOWISE as it traverses the inner solar system before it drifts into the depths of space. 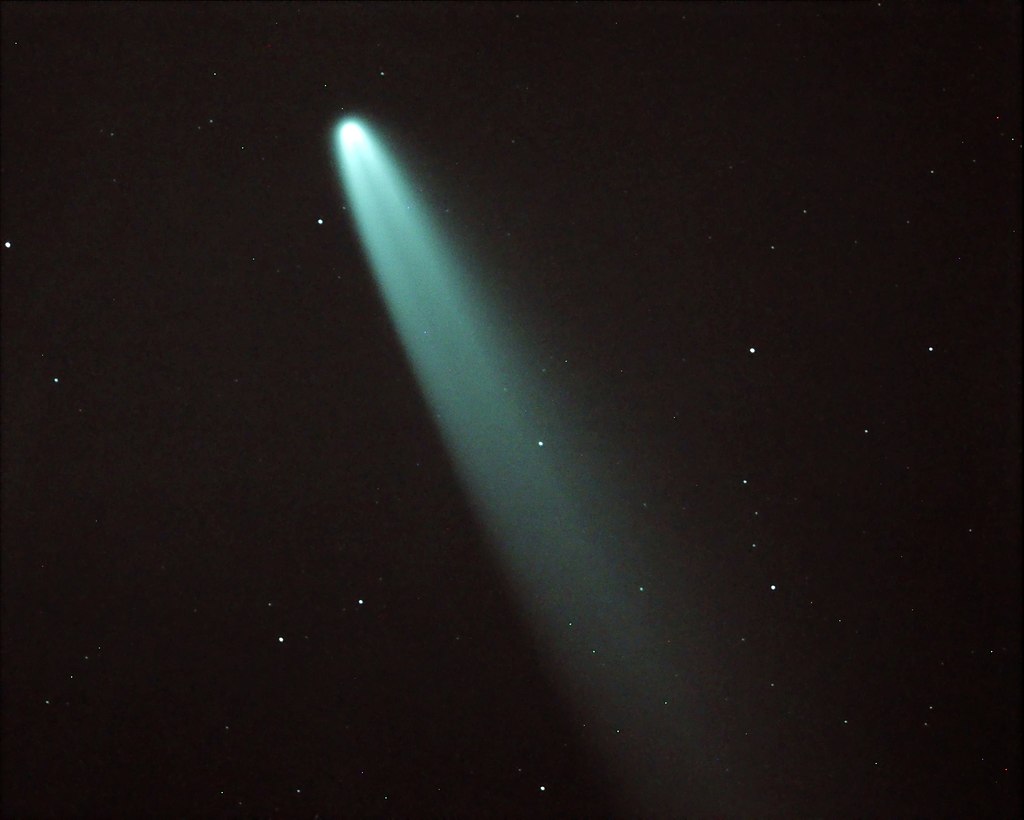 Discovered on March 27, 2020 by NASA’s Near-Earth Object Infrared Explorer (NEOWISE) mission, Comet NEOWISE is making a dazzling display to sky watchers before it disappears, not to see each other again for another 6,800 years.

For those hoping to catch a glimpse of Comet NEOWISE before it’s gone, there are several opportunities for observation in the days ahead, when it will become increasingly visible shortly after sunset in the northwest sky. If you are looking at the sky without the help of observation tools, Comet NEOWISE will probably look like a blurry star with a bit of a tail, so using binoculars or a small telescope is recommended to get the best views of this object.

For those who expect to see Comet Neowise for themselves, here is what to do:

Each night, the comet will continue to rise higher and higher above the northwest horizon as illustrated in the following graph: 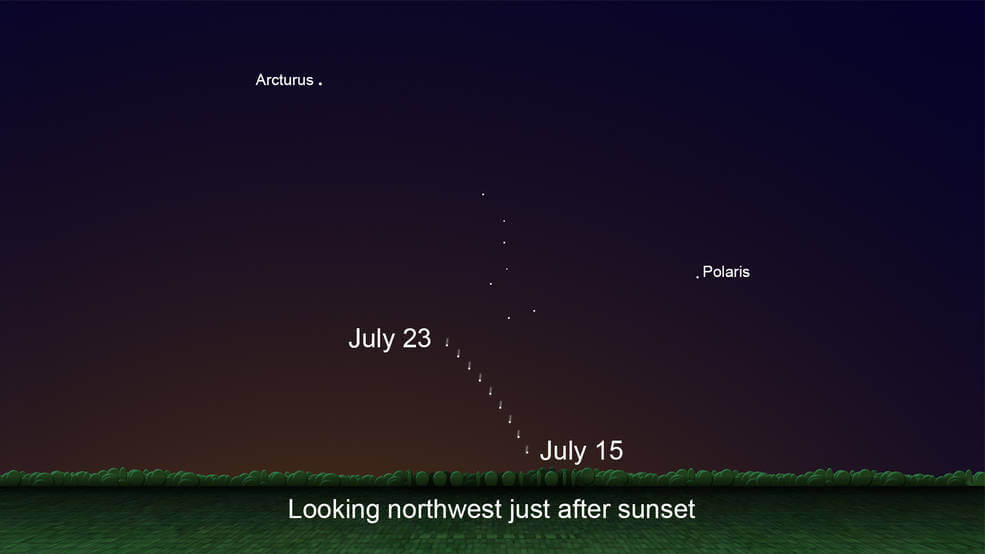 What exactly is Comet Neowise? What is it?

C / 2020 F3 (NEOWISE) or Comet NEOWISE is a long-period comet with an almost parabolic orbit discovered on March 27, 2020 by astronomers during the NEOWISE mission of the Wide-field Infrared Survey Explorer (WISE) space telescope. At the time, it was a magnitude 18 object, located 2 AU (300 million km; 190 million mi) from the Sun and 1.7 AU (250 million km; 160 million mi) from Earth.

By July 2020, it was bright enough to be visible to the naked eye. It is one of the brightest comets in the Northern Hemisphere since Comet Hale-Bopp in 1997. Under dark skies, it can be seen clearly with the naked eye and can remain visible to the naked eye for most of July 2020, at least until July 23, the closest approach point of the comet to Earth. Before then, the comet will get closer to Earth as it moves away from the Sun. As of July 18, the comet was approximately magnitude 3. Binoculars are required near urban areas to locate the comet.

To observers in the northern hemisphere, in the morning, the comet appears very low above the northeast horizon, below Capella. At night, the comet can be seen low in the northwest sky. The comet can be seen in the morning and at night because it is to the circumpolar north of the 45th parallel north. On July 17, Comet NEOWISE entered the constellation Ursa Major, beneath the Big Dipper (The Plow) asterism. 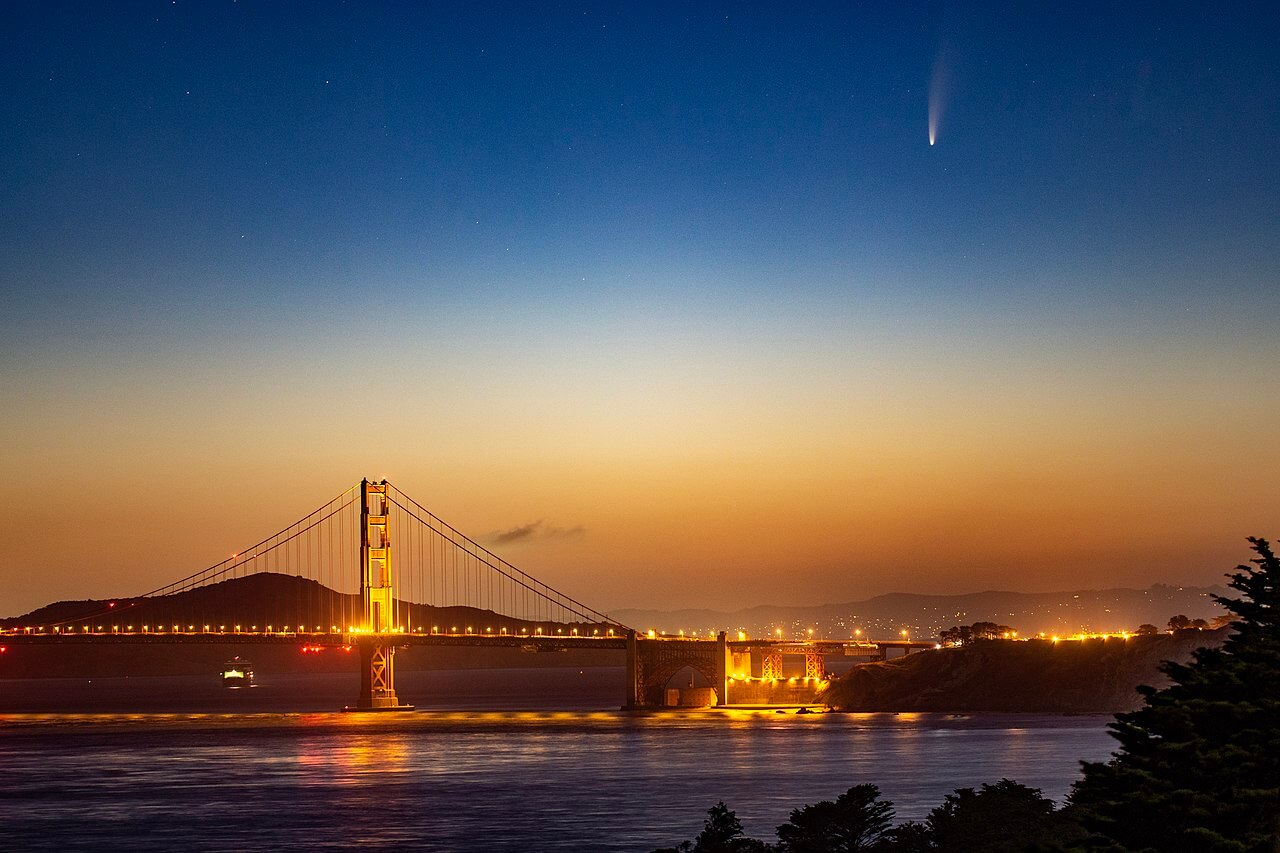 The object was discovered by a team using the WISE Space Telescope under the NEOWISE program on March 27, 2020. It was classified as a comet on March 31 and named after NEOWISE on April 1. It has the systematic designation C / 2020 F3, which indicates a non-periodic comet that was the third discovered in the second half of March 2020. 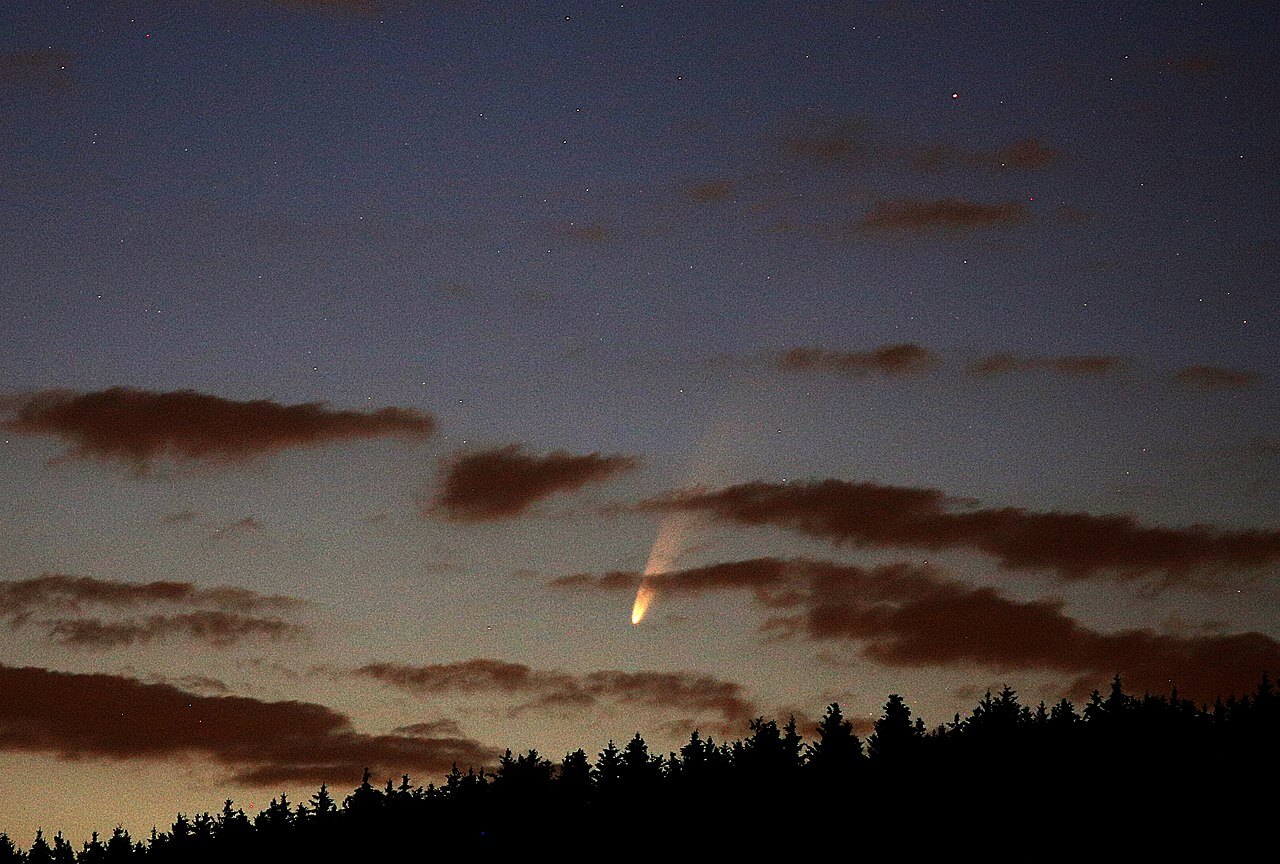 By the beginning of July Comet NEOWISE had lit up to magnitude 1, far exceeding the brightness achieved by previous comets, C / 2020 F8 (SWAN) and C / 2019 Y4 (ATLAS). By July, he had also developed a second queue. The first tail is blue and made of gas and ions. There is also a red tail split caused by high amounts of sodium. The second twin tail is golden in color and made of dust, like the tail of Comet Hale-Bopp. This combination is similar to Comet C / 2011 L4 (PANSTARRS). The comet is brighter than C / 2011 L4 (PANSTARRS), but not as bright as Hale-Bopp was in 1997.

According to the British Astronomical Association, the comet lit up to a magnitude of about 8 in early June at -2 in early July. This would make it brighter than Hale-Bopp. However, since it was very close to the Sun, it was reported to have a magnitude of 0 or +1 and remained as bright for just a few days. After perihelion, the comet began to fade, dropping to a magnitude 2. Its nuclear activity faded after mid-July, and its green coma was clearly visible after that. 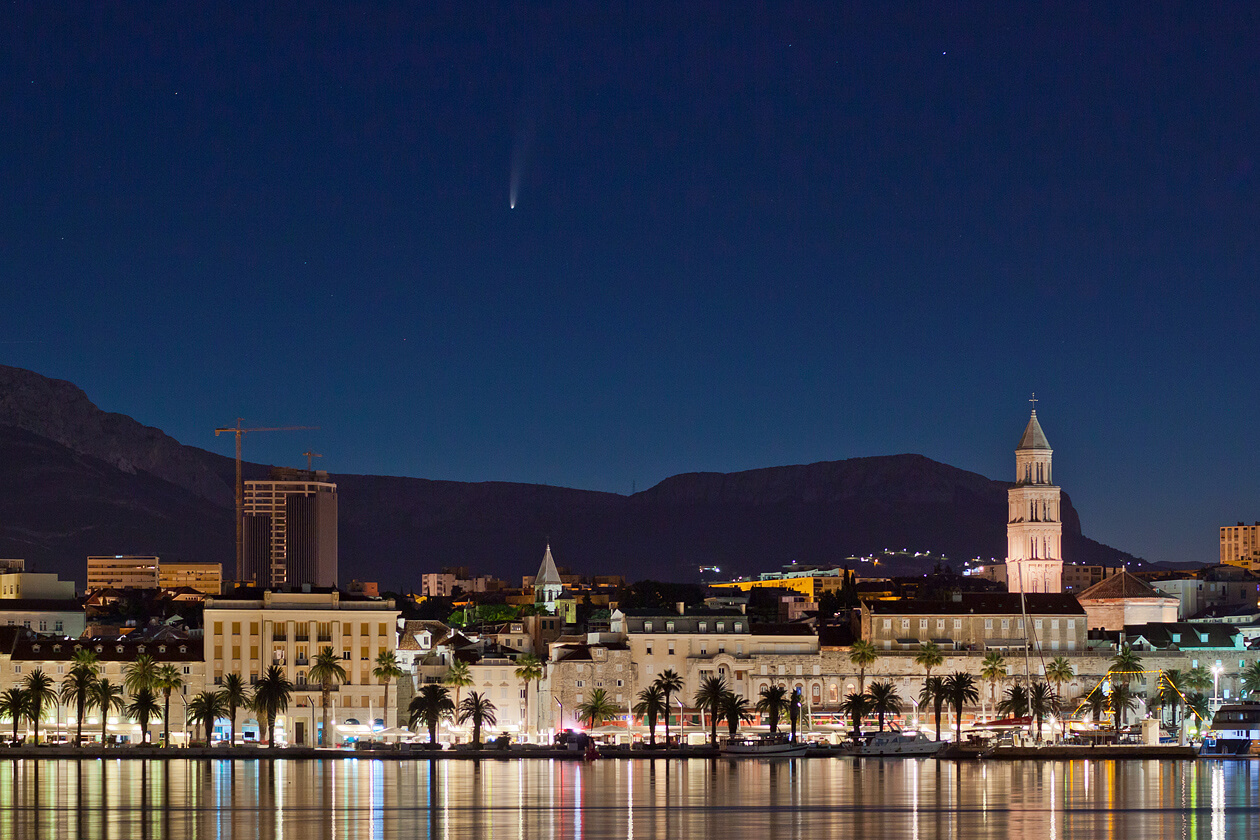 On July 13, 2020, the Entrance / Exit facility of the Planetary Science Institute confirmed a sodium glue. Sodium tails have only been observed in very bright comets like Hale-Bopp and Sungrazer C / 2012 S1 (ISON).

From the infrared signature, the diameter of the comet’s nucleus is estimated to be approximately 5 km (3 miles). The nucleus is similar in size to the Hyakutake comet and many short-period comets such as 2P / Encke, 7P / Pons-Winnecke, 8P / Tuttle, 14P / Wolf, and 19P / Borrelly. By July 5, NASA’s Parker solar probe had captured an image of the comet, from which astronomers also estimated the diameter of the comet’s nucleus at approximately 5 km (3 miles). Later in July 2020, other observations were also reported, including those related to coma morphology and sodium emissions. 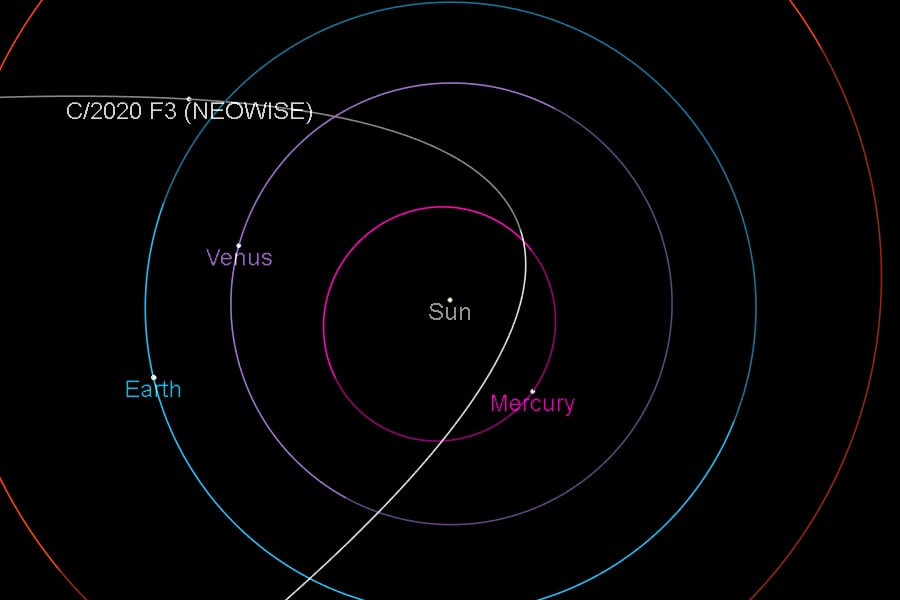 Several authors have suggested that the comet could become a large comet. However, this distinction is generally reserved for kites that are easily observable to the naked eye, even with low to moderate light pollution.