What is fertilization? Why do we fertilize soil? How Is The Soil Kept Fertile? Information about fertilization.

Many a farmer has carefully cultivated the soil, planted seeds, and had good weather for growing, only to have a poor crop. The plants are small, the leaves and stems are a pale yellow-green, and the farmer gets very little to repay him for his work. In our country today, there are all too many acres of worn-out soil that produce weak, sickly plants like these. Yet, not so long ago, when the soil was first cultivated, it produced plenty of strong, healthy plants. And before that, trees, grass, and other plants grew in the soil year after year without any care at all. 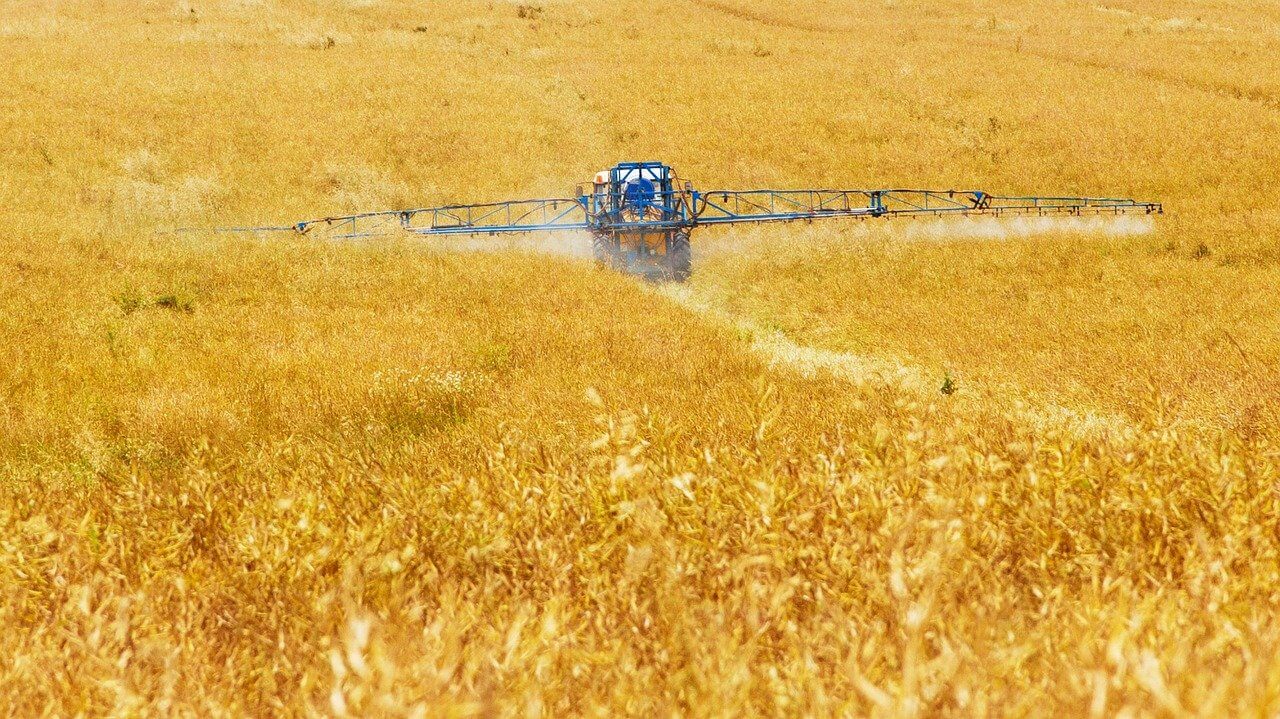 Soil is made of bits of rock mixed with decayed plant and animal materials. Fertile soil contains the proper amounts of sand, clay, and humus. Such soil breaks up easily and stays loose, letting air and water down to the roots of green plants. It also contains enough of various other materials that plants need. To grow properly, plants must take in through their roots at least fifteen different elements from the soil. Of course, the elements must be in the form of compounds that can dissolve and get into the roots. Compounds known as minerals provide green plants with these elements and make the soil fertile.

When the soil is not used for farming, the minerals go back into it as the plants die and decay. On a farm, however, the plants are usually gathered and carried away. So the minerals locked up in the plants are lost to the soil. If a farmer plants and harvests the same crop from a field year after year, the same kinds of minerals are carried away each year. In other words, the crop uses up the very minerals that it needs most. Before long, the crop will be poor because the soil lacks these minerals. For example, when wheat is grown in the same field for several years, the yield soon decreases by as much as one third. The table on this page shows how much of certain important mineral elements are taken from the soil each year by some common crops.

Soil stays fertile when it is not cultivated.

One way to keep the soil fertile: Put back into the soil as much as possible of the crops that are grown in it. Farmers plow under the stalks and straw left on the soil instead of burning them.

Sometimes even an entire crop of clover, soybeans, or rye is plowed under. Manure from farm animals, together with the straw used for bedding in the barns, is spread on the fields and mixed with the soil. By doing these things, farmers put large amounts of minerals and large amounts of humus back into the soil where growing plants can use them again. 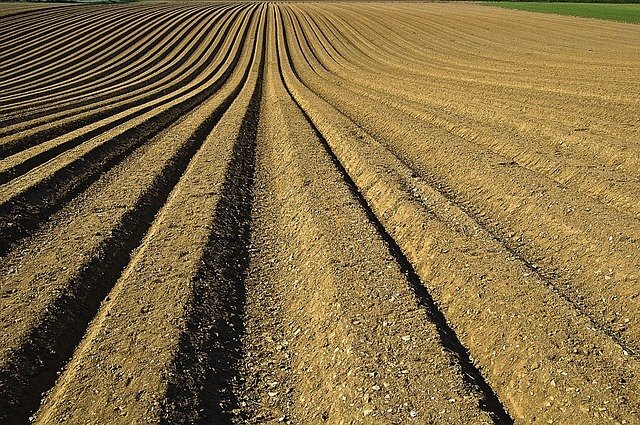 Another way to keep the soil fertile is to rotate the crops. As you know, this means to plant a different crop in the same field each year for several years. Various crops take different kinds and amounts of minerals from the soil. After a few years one kind of crop may grow poorly in a field because most of the minerals that it needs have been used up.

But another kind of crop planted in the same field may grow very well because enough of the minerals that it needs are still left in the soil. Some scientists believe that the roots of each kind of crop give out waste materials to the soil. When the same kind of crop is planted in a field year after year, these wastes pile up in the soil and slow down the growth of the crop. But another kind of crop is not affected by the wastes from the first crop. While the second crop is growing, they slowly disappear. Then the first crop can again be grown in this soil. 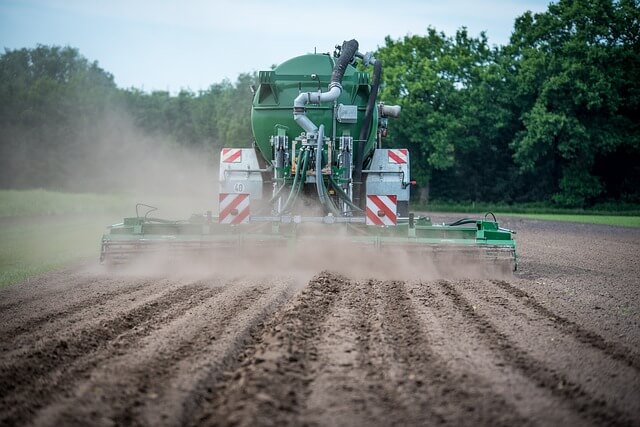 A plan of crop rotation that is often used is raising wheat in a field one year, clover or soybeans the next year, and then corn the following »year. Every second or third year some kind of legume such as clover, soybeans, alfalfa, or vetch should be planted. Certain kinds of bacteria live in the roots of legumes. These bacteria take nitrogen from the air in the soil and fix it into nitrogen compounds that can dissolve in water and be used by green plants. When a farmer harvests a crop of legumes, the roots are left in the ground. As they decay, the nitrogen compounds in them are added to the soil. Experiments made during many years show that crop rotation increases yields by as much as 50 per cent.

Still another way to increase the fertility of the soil is to add some kind of fertilizer.

When a farmer thinks the soil needs fertilizer, he must first find out what mineral elements are lacking. Sometimes a farmer or a soil expert can tell this just by looking at the growing crops. A better way to find out is to test the soil. The farmer can send samples of the soil to the agricultural experiment station of his state. Here chemists will test the samples carefully and tell the farmer what the soil needs. Or the farmer can buy a simple soil-testing kit and test the soil himself. The three elements most likely to be lacking in the soil are nitrogen, phosphorus, and potassium. When the farmer knows what elements the soil needs most, he can buy the kind of fertilizer that has the proper amounts of these elements. Adding these mineral elements to the soil increases the fertility of the soil. 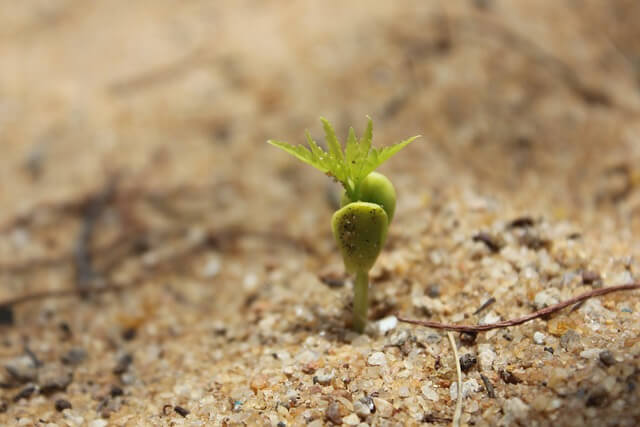 Sometimes crops do not grow well because the soil has become sour, or acid. If a farmer suspects this, he can test the soil to make sure. One way is to press a lump of moist soil against a piece of blue litmus paper. If the litmus paper turns red, the soil is quite sour. This acid condition can be overcome by spreading powdered lime or limestone on the soil. Lime or limestone neutralizes the acids in the soil by changing them chemically into other materials that are harmless to growing plants.

Plants grow best in the thin layer of soil known as topsoil. Yet every year erosion by water and wind carries off 3 billion tons of this good soil from our country. Of course, the minerals that green plants need to grow properly are washed or blown away with the rest of the soil. To provide our crop plants with these minerals, millions of dollars must then be spent for fertilizer to improve the poorer soil that is left. So you can understand why one of the most important ways to keep the soil fertile is to keep the fertile soil that we already have. We can do this by preventing soil erosion.