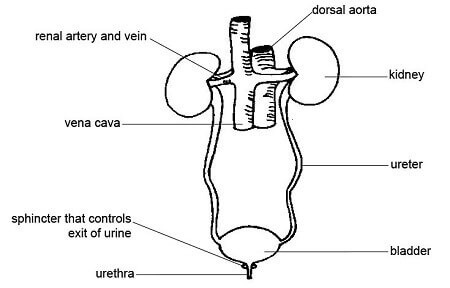 The body must get rid of three main kinds of used materials: undigested food, carbon dioxide, and nitrogen wastes. Undigested food passes out of the body from the lower end of the large intestine. You also know that carbon dioxide formed in the cells gets out of the blood through the lungs. Nitrogen wastes come from the proteins used in the cells.

The two kidneys are behind the stomach and the liver at either side of the backbone. Of course, the kidneys are the main organs of the urinary system. A person can live with onlyone kidney. But if both kidneys are damaged beyond repair, death follows. Each kidney has a large artery leading into it and a large vein leading out of it. The kidneys remove dissolved urea and other chemieals from the blood together with some water. This mixture is the liquid known as urine. From each kidney, a tube called a ureter leads down to the lowest part of the abdomen. Here the urine is stored in a muscular sac called the urinary bladder. From time to time, the urine is passed out of the body through another tube called the urethra. 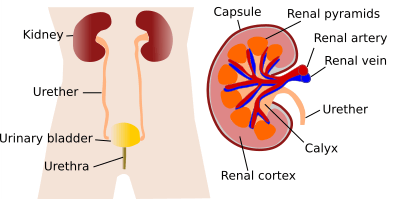 Each kidney is made up of about a million tiny tubes called tubules. These are closely connected with a network of capillaries. Water containing dissolved nitrogen wastes filters out of the blood in the capillaries at the globelike end of each tubule. In some way, the cells along the middle of the tubule take part of the water out of the urine and send it back into the blood. If the body does not have plenty of water, not too much water is lost through the kidneys.