Galvanometer; An instrument used to detect an electric current is called a galvanometer. It can be used to measure the strength of the current, although in everyday work that is done with an ammeter and the galvanometer is generally a more delicate instrument used with fairly small currents. The instrument was given its name in honour of the Italian Luigi Galvani, one of the early workers on electricity. 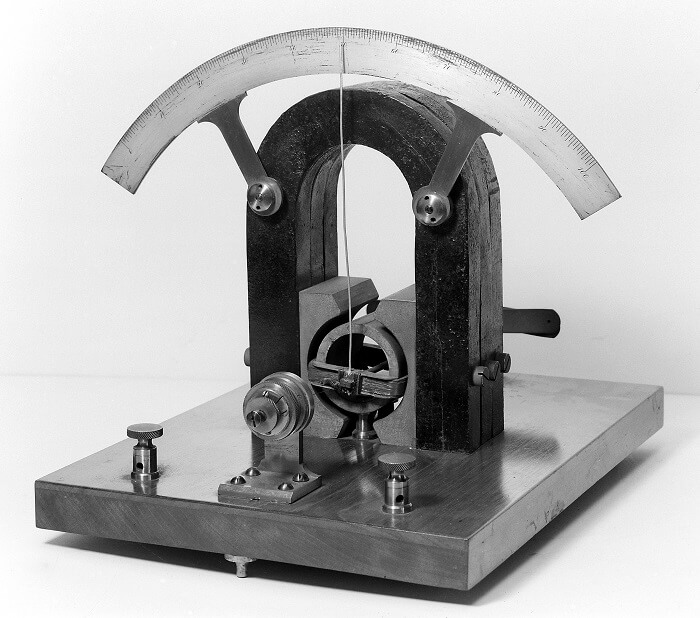 In 1820 the Danish scientist H. C. Oersted found that a wire carrying an electric current would make the needle of a magnetic compass near it point in another direction. A galvanometer may be made in this way, using a coil of wire surrounding a pivoted magnetic needle. When an electric current is passed through the coil, the angle the needle turns through is a measure of the strength of the current—the greater the current the greater the angle through which the needle turns.

Other galvanometers have a coil of wire which is pivoted between the poles (or two ends) of a powerful horseshoe magnet. When a current is passed through the coil it becomes a magnet and tries to turn itself into line with the poles of the horseshoe magnet. The coil may carry a pointer which moves over a scale to show the size of the current, or it may carry a small mirror arranged to reflect a beam of light onto a scale fixed some distance away. The beam of light moves quite a long way for a very small movement of the coil, and such a galvanometer can therefore detect tiny currents.