What causes the seasons? How do seasons occur? Information about earth movement and seasons.

Suppose someone asked you why the days are warmer in summer than in winter. Your first answer would probably be, “Because the days are longer in summer.” This answer would be partly correct. During the longer days in summer, our part of the earth gets more hours of sunshine to heat it. But there are other reasons why summer is warmer than winter. 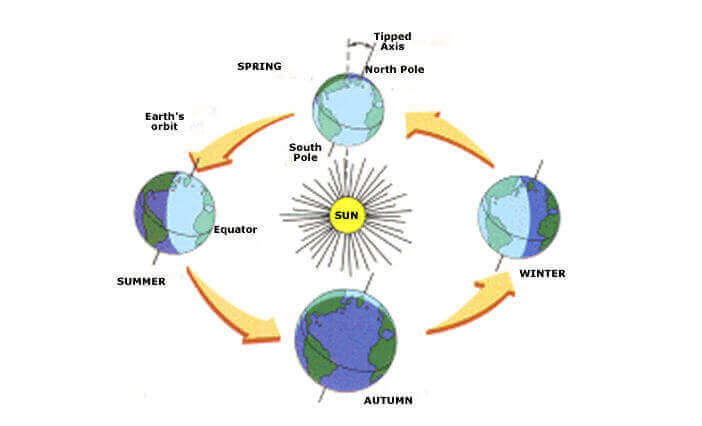 Vertical rays spread over less surface than slanting rays. In our part of the earth, the rays that fail on more than 2 square feet at noon December 21 are concentrated on just 1 square foot at noon June 21. That is, each square foot gets about twice as much energy from the sun. This energy is ab-sorbed by the earth’s surface and changed into heat. So the nearly vertical rays in summer give much more heat to the earth than the slanting rays in winter.

There is still another reason for the greater heat in summer. The earth’s atmosphere always contains dust particles, water vapor, and other materials that absorb and scatter the sun’s rays. In winter, the slanting rays must pass through many miles of this atmosphere before reaching the earth’s surface. In summer, when the rays shine almost vertically, they have fewer miles of the atmosphere to pass through. As a result, the sun’s rays in summer actually have more energy left when they reach the earth’s surface.

You have now learned three reasons why summer is warmer than winter: