Most of us enjoy looking at flowers, because they make our world more beautiful. But flowers have a much more important use than this. They make the seeds from which more plants of the same kind can grow. To understand how plants make seeds, you first need to know what the parts of a flower are. 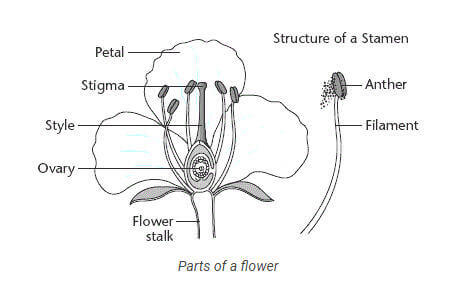 The sepols and petals, which are the showy outer parts of a flower, protect the delicate inner parts. Plants can make seeds without sepals or petals, and some flowers do not have them. The pistils and stamens, which are the inner parts of a fower, are most important in making seeds. Plants cannot make seeds without them. Some flowers have onlyone pistil, while others have more than one. In some flowers the stamens are longer than the pistil, but in others they are shorter. Though each kind of flower has its own shape, you can usually tell which parts of the flower are the pistils and which parts of the flower are the stamens.

Around the pistil is a ring of stamens, which are called the male parts of a flower. Each stamen is usually shaped like a slender stern with a little knob at one end. The stemlike part is called the filament, while the knobby part is called the anther. In various kinds of flowers, the anthers may have different shapes. But all anthers produce the yellow dustlike partides known as pollen. 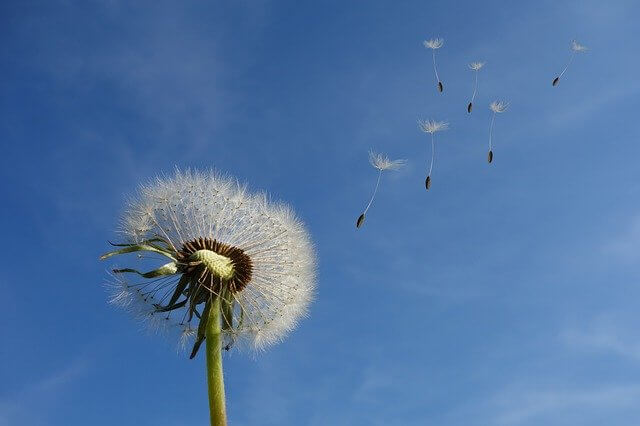 With a magnifying glass or a microscope, you can see that pollen is made of tiny grains. Each grain of pollen is a single cell. The pollen grains of one kind of flower are shaped differently from those of another kind. To make seeds, each flower must get pollen of its own kind. And to supply a flower with pollen, or pollinate it, same of the grains must fall on the stigma of a pistil. When a flower is full grown, or mature, its pollen is easily scattered. You probably know that many flowers are pollinated by bees and other insects or by the wind. 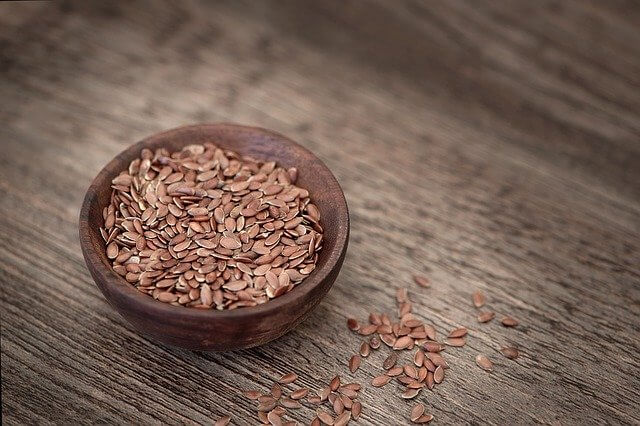 However, seeds are not always produced by one Hower alone, because not every flower provides its own pollen. Some plants produce a great many flowers near others of the same kind. So insects or the wind will almost certainly carry pollen from one plant to another. When pollen from the anther of one flower falls on the stigma of another flower of the same kind, we then say that cross-pollination has taken place. In many kinds of plants, cross-pollination produces better seeds and thus better plants.

Sometimes there are separate male and female flowers. For example, corn has the stamens and pistils in separate flowers on the same plant. The stamens are on the tassels, while the pistils are on the undeveloped ears of corn. Other kinds of plants have the male and female flowers on separate plants. Early in the spring, willow trees produce flowers known as catkins. If you have ever looked for pussy willows, you may have noticed that not all willow trees had the furry, silver-gray catkins that you wanted. These furry catkins have stamens but no pistils. Other willow trees have small catkins with pistils but no stamens. But since these catkins are not furry, they are seldom noticed. Cottonwood trees also have their male and female eatkins on separate plants. Pollen from the anthers of the male flowers is carried by the wind to the stigmas of the female flowers.

When the proper kind of poIlen grain falls on a stigma, the grain absorbs moisture. As it swells, it bursts its covering, or cell wall. Then a very tiny tube grows out of the pollen grain and down through the style of the pistil. While the pollen tube is growing into the ovary, the special nucleus divides and forms two male cells, or sperms. In the ovary are one or more little rounded bodies called Ovules. Inside each ovule a female cell, or egg, has been developing. 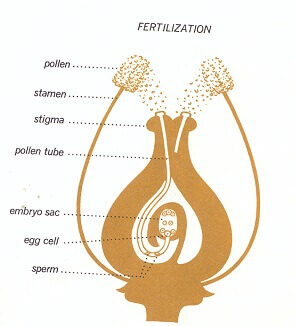 After the tip of the pollen tube reaches an ovule, the sperms are discharged. A sperm nucleus goes into the egg and unites with its nucleus. This uniting of the nuclei of the sperm and egg cell is called fertilization. The eell formed in this way is the first cell of a new plant. That is, a new individual is started when an egg cell is fertilized by a sperm nucleus. The fertilized egg cell begins to grow and then divides to form more cells. At the same time, eertain eells in the ovule are also growing and dividing. As a result of these cell divisions, a seed is produced.

If you study various kinds of seeds, you will find that each seed has these three parts:

The young, undeveloped plant is the embryo, which grew from the fertilized egg cell in an ovule of the parent plant. The food was made in the leaves of the parent plant. Then it was stored in the seed by some of the cells in the ovule around the egg cell. The seed coat was formed by other cells in this avule. Some seeds, such as corn grains, have another part that contains an extra supply of stored food. A bean seed has several parts. Two large, hard halves take up nearly all the space inside the seed coat. These can ta in stored food for the new plant. Because they are the first two leaves of the young plant, they are called seed leaves, or cotyledons. Between the cotyledons are usually some very tiny leaves at the growing tip, or bud, of the young plant. A tiny stalk and a tiny root tip that have scarcely begun to grow are the other parts.

A corn grain is somewhat different from a bean seed. The young plant is under a shallow groove on one side. If you cut the grain lengthwise, you can usually see a tiny pointed leaf and root just beneath the groove. The root points toward the sharp end of the grain, while the rolled leaf points in the opposite direction. The oily part of the grain is its single cotyledon. Around this oily part is an even larger part that contains stored starch. 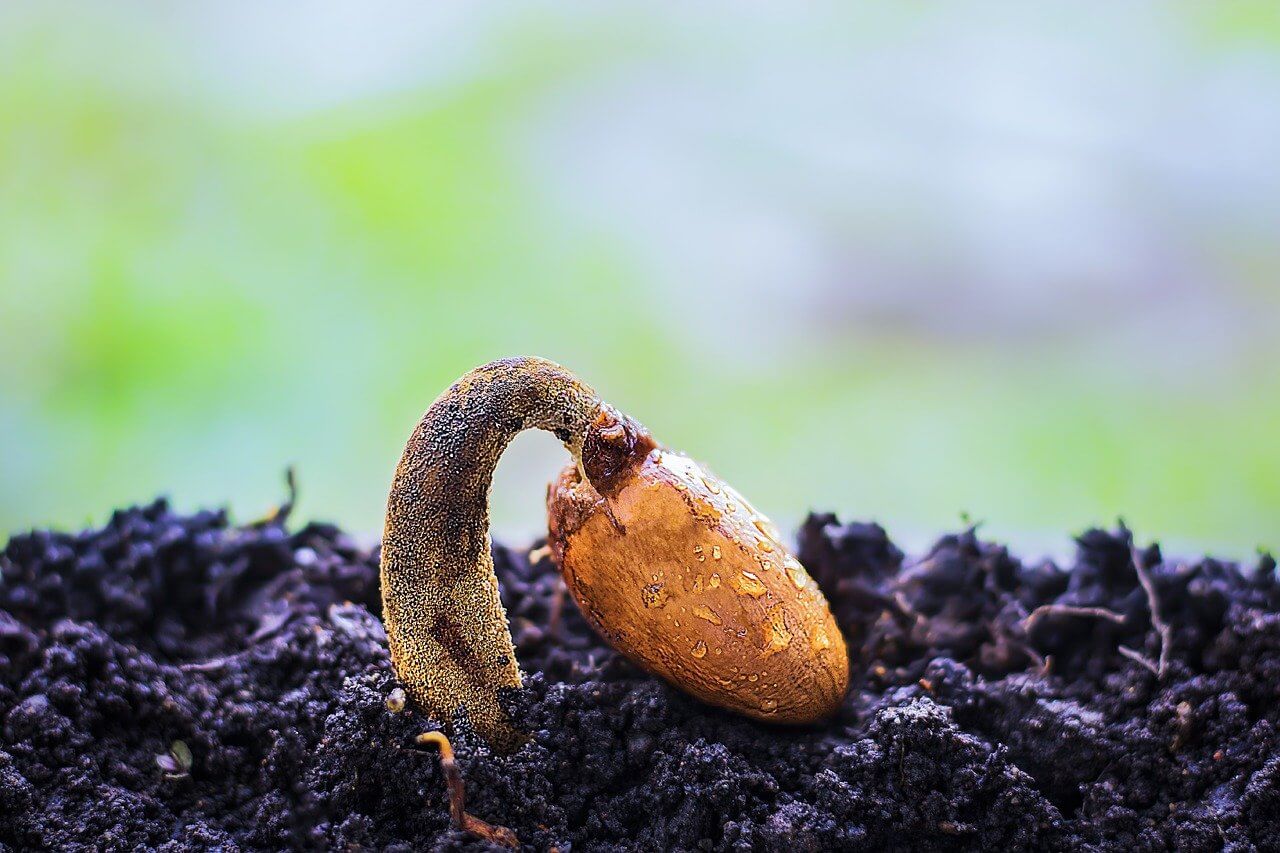 The part of any plant that contains the seeds is called the fruit. It is formed mostly from the ovary, which grows as the seeds are being made inside the ovules. Perhaps you think that fruits are always sweet and juicy like apples, oranges, cherries, peaches, and plums. Of course, these and others like them are fruits because they all have seeds. But so do tomatoes, cucumbers, pumpkins, bean pods, walnuts, and many other things. To a scientist, these are all fruits, too. Each fruit contains seeds that can grow into new plants, which will make more seeds and fruits.