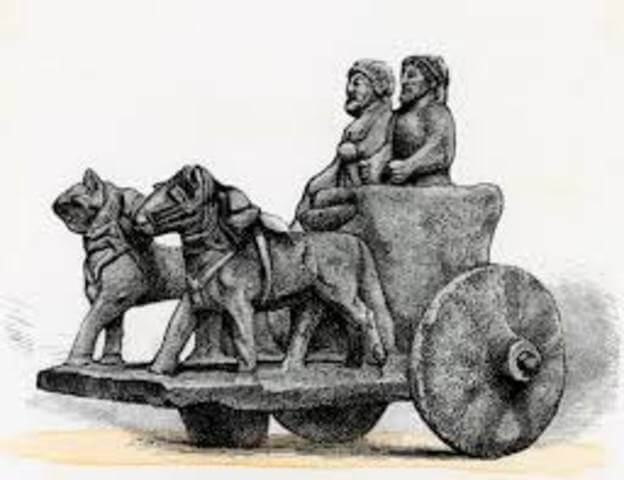 Transportation On Prehistoric Times; The most primitive type of transportation was human pack-a-back, using human beings as the means of conveyance. It is likely, therefore, that some of the first fruits of human ingenuity were devices that could be placed on the shoulders or head to facilitate bearing things or carrying children from place to place. Among the American Indians the squaws used such devices to carry their papooses on their backs. Primitive man in the course of time domesticated animals and trained them to carry burdens or pull crude vehicles; among these animals were horses, camels, cattle, buffaloes, llamas, elephants, and dogs. The only vehicle that prehistoric man developed for use with animals was a drag, consisting of a forked tree limb with strips of skins or sticks across the two prongs to which the burden was attached. It remained for civilized man to develop the saddle for use in riding animals and to produce the vehicles that became associated with most animal-powered transportation.

Prehistoric man invented the wheel, the basis of modern transportation, but to what extent he used it is not certain. The axle, which permits the rotation of the wheel on a cart or wagon, was a development of early civilization. There is little doubt that primitive man found the waterways the best medium for conveyance, and he therefore tended to live in the vicinity of waterways, unless security considerations directed retreat to a less accessible location. Floating logs were found to be more buoyant if rotted out in the center, and this led to the dugout, a vehicle carved from a log. The raft also became an important vehicle for prehistoric man. Some primitive peoples, like the American Indians and the Eskimos, developed very refined canoes. The Indians made their canoes out of birchbark, whereas Eskimos stretched skin over a skillfully constructed framework. The canoe of the American Indian was often a true work of art.

Prehistoric man learned early that, by attaching skins to one or more poles fastened to his raft or boat, he could use the wind as a propellant. We find, therefore, that at the dawn of civilization man had developed both the sailboat and a crude cart with an axle. Primitive man did almost nothing to improve roads or waterways, but confined himself to supplementing human power with animal power and to developing primitive vehicles for conveyance on land or water. On land he used the paths or trails of large animals for highways.