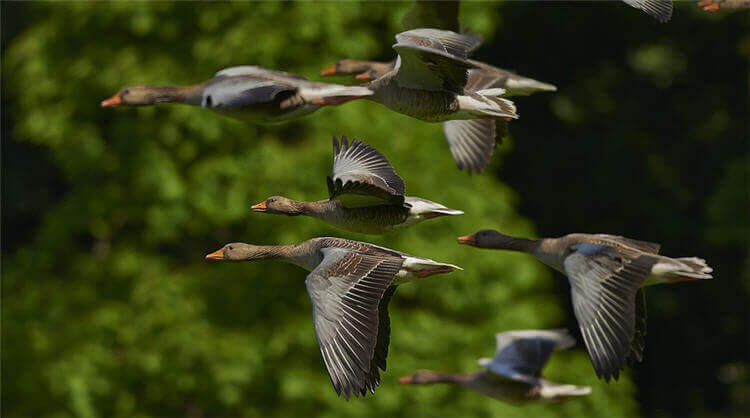 How Do Animals Find Their Way?

There are many stages or degrees of migratory behavior, and the manner in which animals learn to follow their routes varies. The mule deer of western North America migrates relatively short distances. Such migrations are made over areas familiar to the older animals, and the young learn the way by following the herd. Among other forms, however, the young must find their way without help from the adults.

For example, the young of the migratory gulls begin their migration before the adults; thus they must depend entirely upon themselves. Those butterflies which migrate annually have a life cycle of but one year, and each generation must find its own way. Experimental evidence has resulted in a greater understanding of the environmental factors used by animals as well as a greater understanding of what they are capable of doing.

While studying ants in the deserts of North Africa, Felix Santschi observed in 1923 that the ants were able to use the sun’s position for orienting themselves toward their nests. Further observations disclosed that these ants could orient themselves correctly if they could see only a portion of the blue sky, even though the sun was not visible to them.

Karl Von Frisch, while studying the behavior of bees, noted that the bees also needed to see only a portion of the blue sky to orient themselves, and he showed further that the bees used the polarization of the light for their orientation. (Polarization is an optical feature of light from a blue sky, but not from the light which penetrates a cloud cover.) Since then other investigators have demonstrated that a wide variety of animals including Limulus, the horseshoe crab, and Daphnia, the water flea, can use polarized light for orientation. It has also been shown that underwater light is polarized; thus marine and freshwater animals may well respond to light in a manner similar to that of terrestrial forms.

Gustav Kramer demonstrated in 1952 the most definite response by birds to polarized light. His experiments with starlings showed that they used polarized light to orient themselves for both homing and food finding. Not only did they respond to the direction of the light, but they were able to adjust for the differences in time of day.

Thus a starling trained to find food in a certain direction in the morning would unerringly go in that direction in the afternoon. This “time sense” also appears to be present among many different animals. Donald Redfield Griffin suggested in 1953 that the pecten, a fanlike structure in the eyeball of birds, may function as a built-in sextant by which the bird is able to gauge the angular distance of the sun above the horizon.

Those salmon which migrate back to their birthplace to spawn must often travel 800 to 900 miles. The manner in which they are able to accomplish this amazing feat has long puzzled scientists. Arthur Davis Hasler and James A. Larsen announced in 1955 a series of experiments indicating the possible method which these salmon use to find tiny streams often hundreds of miles from the open ocean in which they have grown to maturity. Apparently the salmon are able to detect very small amounts of chemicals, and small differences in the organic contents of various streams may be sufficient to attract them back to their birthplace.