What is a weather map about? How are they made? What organization work on weather maps?

In 1871 an organization called the Weather Bureau is set up to gather information about the weather and to send out warnings of approaching storms. To find outhow the Weather Bureau prepares forecasts, imagine that you are visiting one of the forecast centers, or main receiving stations for weather reports. Here you would probably first notice same typewriters that seem to be running themselves. Theyare tele-typewriters automatically typing out the weather reports from all over the district. However, you would not be able to read the messages. Each line begins with two letters that show the weather station from which the report was sent. The rest of the line is just a string of letters, figures, and weather symbols. These are sent in a certain order so that the weathermen know what each one means.

Reports come into the forecast centers from weather stations scattered over the entire continent and from the oceans on either side. There are about 800 land weather stations in the fifty states and other United States’ possessions. Ships at sea also send their weather observations to the nearest land station. At most weather stations, observations are made every 6 hours. As part of each observation, pilot balloons are sent up at many stations. From some stations, radiosondes are sent up twice aday. Each weather station has many bits of information to send to the forecast center. The weatherman cannot keep all these facts in mind. So the facfs are put together in a picture of the weather, which is known as a weather map. 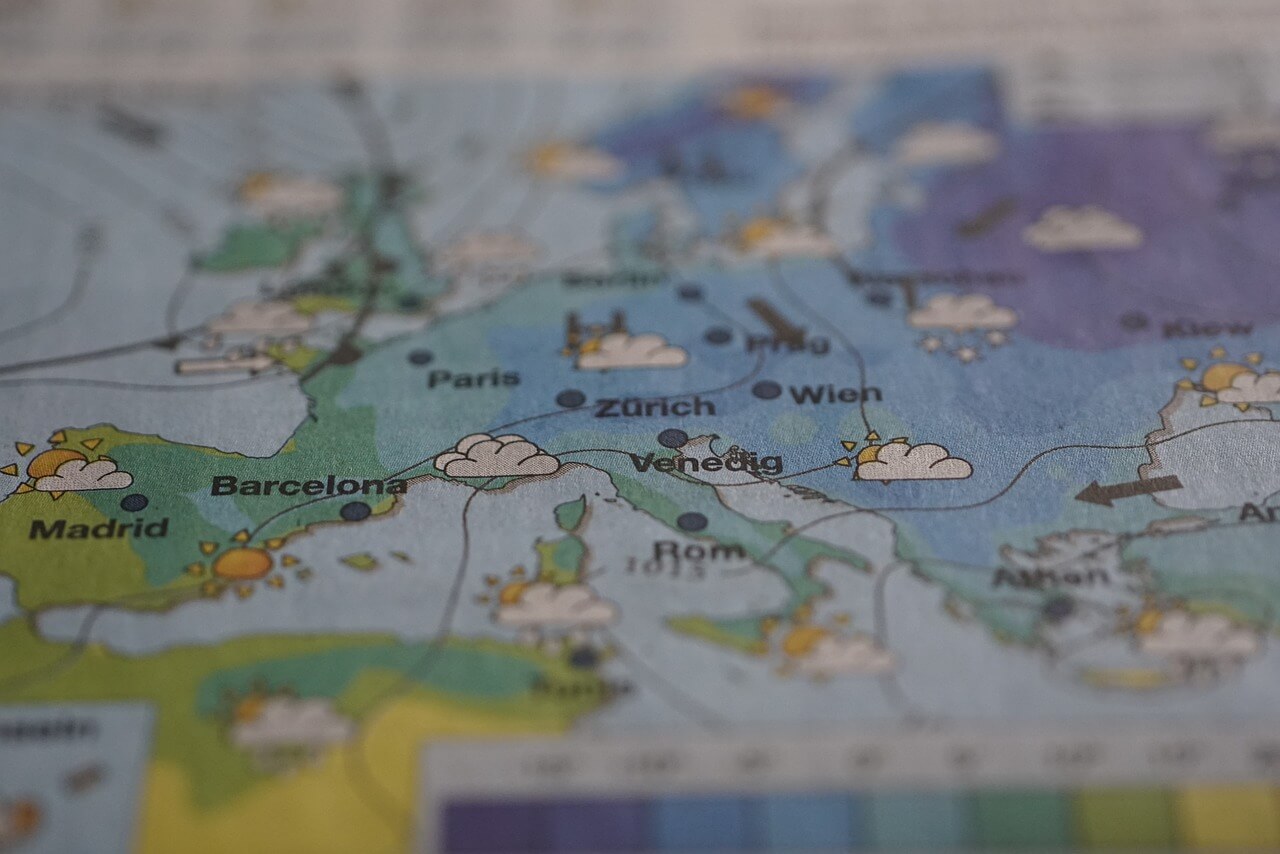 As the weather reports come into a forecast center, the facts are recorded on an outline map of the United States. On this map is a small circle that represents each weather station. To show how much of the sky there is covered with clouds, part of the circle is blackened. From the circle an arrow shaft is drawn to show the direction from which the wind is blowing. On one side of the arrow shaft, feathers are drawn to tell what the speed of the wind is. Atmospheric pressure, temperature, humidity, and other weather conditions are shown by figures and symbols arranged in a certain order on the map.

When the information from all the reports has been put on the weather map, isobars are drawn. An isobar is a line that connects places that have the same atmospheric pressure. Of ten the isobars appear in the shape of an irregular loop, When many of them mn around an area, the atmospheric pressure in the area is either quite high or quite low. So the area is marked on the weather map as a High or a Low. If the isobars are close together, the wind is usually blowing rather hard because of the great differences in atmospheric pressure. By carefully studying the isobars, the wind arrows, and the information about the temperature and the humidity, a weather forecaster can tell what kind of air is over an area and in which direction it is moving. From all these facts, he can then draw in the warm and cold fronts.

The forecaster next looks at the weather maps for the past few days and compares them with his new weather map. He also studies various records and eharts that show similar weather conditions. From what he knows about the kind of weather that usually follows these conditions, he can predict the weather very accurately for the next few hours. He can also make a fairly aceurate prediction of the weather for the next day or two or even the next five days. However, you must remember that the weather is not the same all over the country. In each forecast center, a different forecast must be made for the area around it. Then after the forecast is made, the wires in the forecast center are again filled with messages. But now the messages are going out to newspapers and to radio and television stations to tell farmers, shippers, heating engineers, railroad men, ship captains, airplane pilots, and many other people what kind of weather to expect.