What are the forms of precipitation? How do they form, Information on rain, snow, hail and sleet.

You have had many experiences with rain, sleet, hail, snow, dew, and frost. They are all different forms of precipitation, as the moisture that comes out of the air is called. Each form of precipitation is produced under certain special conditions of its own, but all the forms are alike in one way: The air must be cooled below the dew point before water yapor will condense into water droplets or ice crystals. 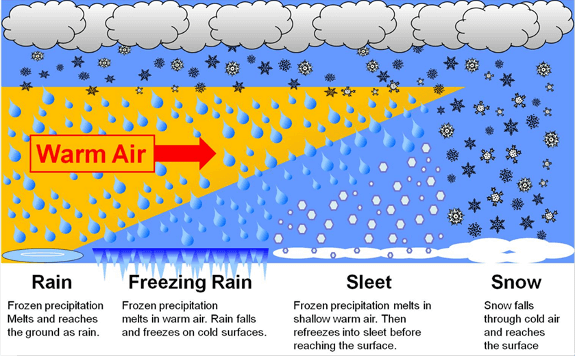 Sometimes rain falls from a cloud, but at other times it does not. if the air in a cloud is cooled still further, even more water yapor condenses. Some of it condenses on the water droplets already in the cloud and makes them larger. Moving air alsa jostles the droplets around, and they bump against each other. When two of them touch, they run together and form a bigger drop of water. At last, the droplets get so big that they can no longer float in the air. Then they fall from the cloud as raindrops.

The raindrops sometimes fall through a layer of air near the earth’s surface where the temperature is below freezing. Then the drops freeze and fall to the earth as sleet. So sleet is just frozen rain, or little bits of ice mixed with rain. Hail usually forms during summer thunderstorms when there are strong upward currents of air inside cumulus clouds. Little bits of ice form in the cold air high above the earth. When these fall into warmer air, they are covered with water.

Then they are blown back into the cold upper air, where this layer of water freezes. This keeps up until the balls of ice are too heavy to be held up by the air currents. Then the ice balls fall to the earth as hail. Because of the way in which hailstones are formed, the ice is in layers.

Snow is formed in clouds where the temperature is below freezing. Water vapor changes directly into ice crystals as it comes out of the air. These tiny bits of ice combine to form snowflakes. Like raindrops, snowflakes fall to the earth when they are too big to float in the air. The very large, fluffy masses of snow that fall in some snowstorms are really made of many small snowflakes that came together as they fell.

Not all forms of precipitation fall to the earth from clouds. Some forms are produced near the earth’s surface directly from the air. When the sun sets, the earth begins to get cooler. Heat is radiated through the air and out into space from soil, plants, buildings, and other objects. The air next to them is cooled by conduction.

If it is cooled below the dew point, water vapor condenses on the cool objects as droplets of water that we call dew. However, if the temperature is below freezing, water vapor condenses directly into ice crystals that we call frost. So frost is not frozen dew, as some people think. Dew and frost are more likely to form on still nights than on windy nights. When the wind is blowing, co ol air ne ar the earth is mixed with warmer air. So the air is not cooled below the dew point. Dew and frost do not of ten form on cloudy nights because the clouds reflect much of the heat radiated from the earth’ s surface.