What is centrifuge? How does a centrifuge work? What are the uses, features, types of centrifuge. Information about centrifuge.

CENTRIFUGE, is a machine for subjecting an experimental sample or object to sustained centrifugal force. A wide range of centrifuges have been built for separating gas molecules that differ in mass, for separating solid particles from liquids, and for separating two or more liquids that have different densities. Centrifuges have also been designed for subjecting men, plants, and animals to centrifugal force. Since centrifugal force has the same properties as the earth’s gravitational force, the force exerted on a sample or object in a centrifuge is generally compared directly with the pull of gravity. Thus, centrifuges are describea as exerting a force of two or three times to over five million times the force of gravity (2 or 3 g to over 5,000,000 g). 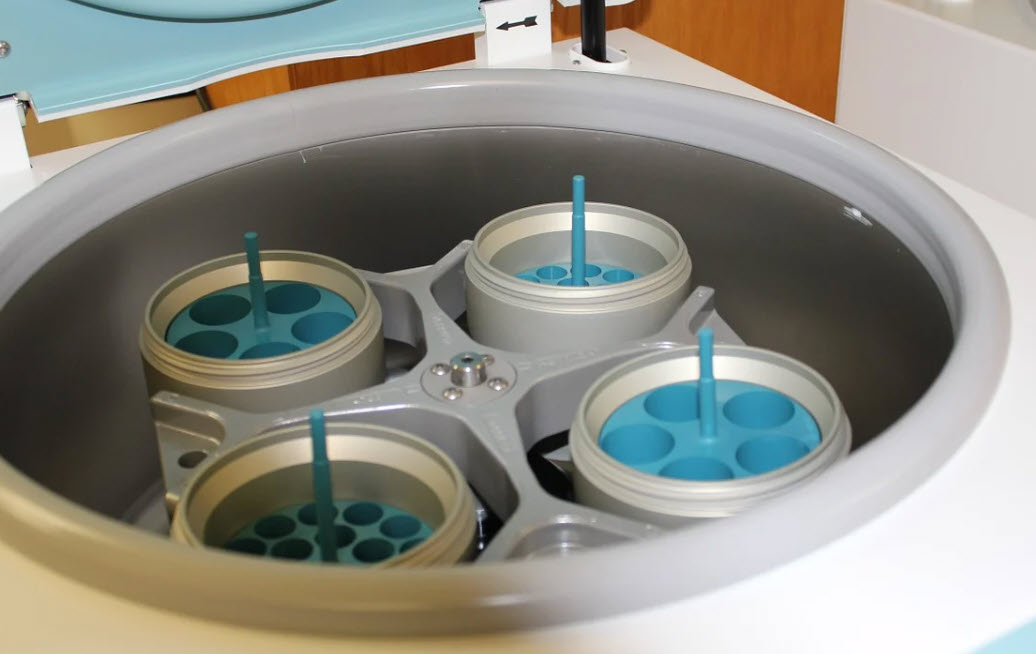 How a Centrifuge Works

The simplest centrifuge is merely a bucket attached to a rope that is swung around one’s head. Most centrifuges, while employing exactly the same principle, have metal rotors that spin on a shaft driven by either electric motors or air or oil turbines.

According to Newton’s first law, a moving object continues in a straight line unless a force is exerted to deflect it. When an object is moved in a circular path, the reaction against the deflecting force (the pull of the rope on the bucket) is the centrifugal force (which also holds the water in the bucket). The centrifugal force exerted on a partide in a centrifuge is given by:

where the force (F) is expressed in grams, the speed (rpm) is in revolutions per minute, the radius (R) (distance between the axis of rotation and the partide) is in centimeters, and the partide mass (M) is given in grams. Note that the force is directly proportional to the radius (which means that at a fixed speed if the radius is doubled or halved, the force is correspondingly doubled or halved) and is proportional to the square of the speed (doubling the speed increases the centrifugal force at a given radius by a factor of four).

Centrifuges are used industrially to cast metal pipe, to recover crystalline precipitates such as table sugar, to separate small pieces of lean meat from particles of fat, to concentrate slurries, and to dry laundry. The most familiar industrial centrifuge is the cream separator. In the earth’s gravitational field droplets containing butterfat, being lighter than skim milk, rise slowly to the top of whole milk. Centrifugal force may be used to achieve this separation much more rapidly and in a continuously flowing stream.

A cream separator rotor contains a series of closely spaced cones or separators. As milk flows between these, droplets of cream need only rise a short distance before impacting the separator surface where the particles coalesce and flow toward the axis of the rotor as a mass. Skimmed milk collects along the inner surfaces of the separators and cream collects against the outer surfaces. These separated fluids are led continuously out of the rotor through separate spouts.

In research and in clinical studies, preparative centrifuges are used to separate particles ranging in size from blood cells and flocculent precipitates to protein molecules or low molecular weight substances on the basis of either sedimentation rate or buoyant density. Roth types of separations are made in each of the three types of centrifuge rotors that have been developed. These rotor types are: the swinging-bucket rotor, in which the centrifuge tubes are vertically oriented during rest and swing out to a horizontal position during rotation; the fixed-angle, or angle-head, centrifuge, in which the centrifuge tubes do not change orientation with respect to the axis during rotation; and the zonal centrifuge rotor, which does not use centrifuge tubes but is a hollow pressure vessel that is usually filled and emptied while spinning.

If only one partide species is present in a suspension, it may be sedimented completely to the bottom of a centrifuge tube and recovered as a pellet. If two or more species are present, these may be partially separated by sedimenting the most rapidly moving species and then removing the overlying fluid and the slower particles suspended in it. The sedimented pellet will, however, contain some of the slower particles. These may be removed by resuspending the pellet and resedimenting the rapidly sedimenting particles several times. Centrifugation of this type is used to separate red cells and leucocytes from blood plasma, to remove unsoluble precipitates from suspension, and to separate subcellular particles. 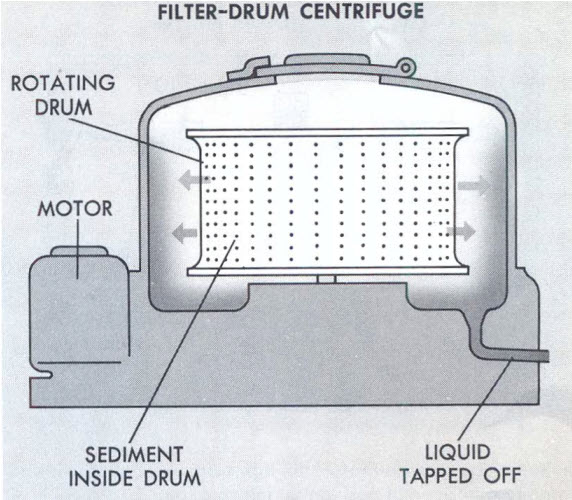 Higher resolution separations may be achieved by a technique termed “zonal centrifugation.” In a centrifugal field particles having different sedimentation rates move different distances, often forming diserete zones which are recovered at the end of the experiment. It is evident that a partide whose density exactly matehes that of the suspending Solutions will neither float nor sink in a centrifugal field. If the suspending solution is a density gradient, then a partide may float or sink through the gradient until it finds the level where the liquid density and the partide density (or buoyant density) are equal. This level is termed the isopycnic level. Particles of one density may thus be concentrated into a narrow band, and if particles having different densities are present, these may separate into several bands. This technique, also termed isopycnic centrifugation, is widely used to separate subcellular particles, viruses, and DNA molecules.

For large-scale separations in liquid density gradients a new type of centrifuge, termed a zonal centrifuge, has been developed at the Oak Ridge National Laboratory in Tennessee. It has hollow rotors divided internally into sector-shaped compartments by vertical septa. Special seals are attached to the rotors to allow fluids to be pumped into and out of the rotors during rotation. While spinning at a relatively low speed, a liquid density gradient that is pumped in is held against the rotor wall by centrifugal force.

When the rotor is filled with the gradient, which is usually a sucrose or cesium chloride solution, the sample is introduced to the rotor çenter. The rotor is then accelerated to high speed to separate particles on the basis of either their sedimentation rate or their isopycnic density. After the separation has been completed, the rotor is decelerated to low speed, and a dense fluid is pumped to tire rotor edge. This displaces the gradient, and the separated partide zones which it contains, toward the axis and out through the fluid line seal where it is collected as a series of discrete fractions.

Zonal centrifuges have been used for the high-resolution separation of subcellular particles including nuclei, mitochondria, lysosomes, fragments of endoplasmic reticulum, chloroplasts, glycogen, polysomes, ribosomes, viruses, macroglobulins, RNA, and DNA. Zonal centrifuges are especially useful for the purification of large quantities of virus for vaccine purposes. Continuous flow zonal centrifuges have been developed in which the virus-laden fluid flows through a high-speed rotor containing an imprisoned liquid gradient. As the virus particles sediment out of the stream they band isopycnically in the gradient and are recovered in a highly concentrated and purified form. This method is now in routine use for the purification of influenza vaccines.

High-resolution centrifugal separations have revolutionized cell biochemistry by allowing large quantities of celi substructures to be isolated in sufficient quantity for analysis by conventional methods. A large part of present knowledge on the localization of activities and functions in cells has therefore been gained by using centrifugal separations.

Swinging-bucket centrifuges are frequently used for separating large particles. At speeds up to approximately 3,000 rpm, buckets containing up to a liter are widely used for blood fractionation and for the sedimentation of coarse precipitates. As the speed is increased, the volume that can be centrifuged in the bucket or cup drops off sharply until only a few milliliters may be centrifuged at 65,000 rpm.

A considerable increase in the volume which can be centrifuged at a given speed is achieved by using solid rotors containing sealed plastic centrifuge tubes held at a fixed angle. By far the largest number of rotors used in the range of 5 to 65,000 rpm are of this type. In a titanium angle rotor, for example, approximately 162 milliliters of a suspension may be centrifuged at 50,000 rpm. The force exerted (226,000 times that of gravity) is sufficient to sediment protein molecules such as gamma globulin in a few hours. The shape of the tube, however, limits sedimentation rate separations to particles that do not aggregate when they collide with the wall of the centrifuge tube. 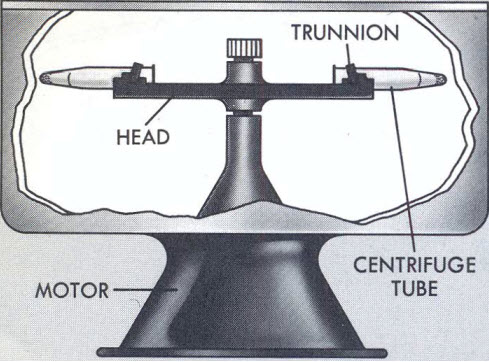 While estimates of partide size and weight can be made in each of the several rotor types described, precise measurements are made by centrifuging the suspension in a cell fitted with transparent quartz or sapphire windows and by recording the rate of sedimentation or the position and shape of an isopycnic band photographically or with a scanning photo-multiplier cell. These optical centrifuges are called “analytical ultracentrifuges.” The term “ultracentrifuge” refers to any centrifuge operating over 20,000 rpm. The first analytical ultracentrifuge was used by Theodor Svedberg and J. G. Nichols in 1923 and led to the discovery that proteins have characteristic molecular weights.

Accurate determinations of molecular weight may be made at very much lower speed (usually about 6,000 rpm) under conditions where an equilibrium is reached between sedimentation toward the cell periphery and back diffusions in the opposite direction. No sharp boundary is formed; instead, a continuous concentration gradient is seen. From the shape and slope of the curve, and accurate measurement of rotor speed, the molecular weight may be calculated. Molecular weights between 40 and 50,000,000 have been determined in this manner.

Isopycnic centrifugation, in either preformed gradients or gradients formed by sedimentation of gradient solutes during centrifugation, is vvidely used to determine the buoyant density of nucleic acids, proteins, viruses, and subcellular particles. Solutions of cesium chloride provide sufficiently dense Solutions to allow DNA molecules to be sharply banded. Accurate determinations of the ratio of the nucleotides of which the molecule is composed may be obtained from the banding densities. In addition, the width of the band provides an indication of the molecular weight of the DNA molecules.

Analytical ultracentrifuges, and other high speed centrifuges as well, are operated in a high vacuum to prevent heating due to air friction. Heavy armor is provided around the vacuum chamber to stop fragments in case the rotor explodes at high speed.

During recovery from high-speed dives in aircraft, launching or reentry of space vehicles, or aircraft or automobile accidents the human body may be subject to rapid acceleration or deceleration, frequently with adverse effects. To study this problem centrifuges have been built which will rotate experimental animals and men at low speeds. Acceleration produc-ing a force acting along the long axis of the body from head to seat is called positive ( + G); that acting from seat to head is called negative ( — G), and that acting perpendicular to the long axis is called Gz acceleration.

A + G acceleration of 5 or 6g lasting more than 3 or 4 seconds will produce “blackout” and later unconsciousness. Acceleration in the opposite direction (— G) produces more serious and longer lasting effects ofı the brain. Higher + Gz acceleration can be withstood in a prone position than in other positions, over 8g being experienced during launch for orbital flight. Large experimental centrifuges for human use allow the effect of rate of acceleration, position, use of anti-g suits, and conditioning on circulation, vision, and performance to be studied in the laboratory.