Hans Sachs; (1494-1576), German poet, who is the most famous of the 16th century Meistersinger (Mastersingers ), master craftsmen who wrote poems and songs as an avocation.

Sachs was born in Nuremberg on Nov. 5, 1494, the only son of Jorg Sachs, a tailor, and his wife, Christina. Hans attended the local Latin school from 1501 to 1509, when he was apprenticed to a shoemaker. At this time also he received instruction from Leonhard Nunnenpeck, a weaver, in the art of the mastersong. Sachs spent his years as a journeyman in southern Germany, Austria, and the Rhineland. After returning to Nuremberg in 1516, he became a master shoemaker and subsequently a mastersinger. In 1519 he married Kunigunde Creutzerin, by whom he had seven children. He became famous four years later with his poem The Wittenberg Nightingale, in which he praised and supported Martin Luther and the Reformation. Sachs remained in Nuremberg throughout his long life, working as a cobbler and composing mastersongs, plays, and poems. For many years he was one of the official examiners at Nuremberg’s singing school of new aspirants to the title of mastersinger. He died in Nuremberg on Jan. 19, 1576. 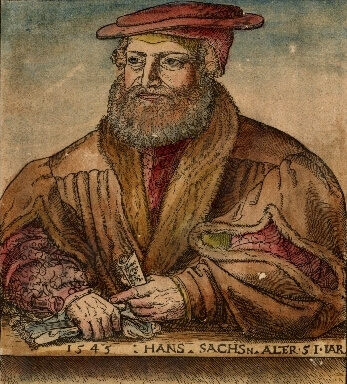 Sachs began to collect his poems in 1517. His first efforts at drama date from 1518. Evidence of his wide reading is reflected in such titles as Gismundo and Guisgardo, Lucius Papirius Cursor, Lady Poverty and Lady Luck, Lucretia, and Virginia. His learning is also apparent in his translations of the classics and of Italian and French literature.

Sachs’ purpose, whatever he was writing, was to point a moral, usually a practical one about coexisting with one ‘s fellowmen. The story is told in plain language with little attempt at subtle characterization, motivation, or descriptive setting. The moral is clearly stated at the end. Sachs greatest talent lay in his presentation of the scenes he knew best-the life of the petty bourgeoisie of his time. This talent is particularly evident in his Shrove Tuesday plays, with their emphasis on crudely realistic comedy. Their spirit is often indicated in their titles, such as The Bakers Boy in the Convent, The Cobbler and the Liver Sausage, and The Parson and the Adulterous Peasants. His play The Wet Man is typical. In it, aman works all day in the rain. When he comes home, his wife tells him to go to the well for water since he is already wet. He fetches the water and pours it over her, remarking that, since she, too, is now wet, she can go to the well. The moral of the story is: don’t let your wife make a fool of you.

Sachs was a prolific author, producing an enormous number of lyrics, fables, tragedies, comedies, and narrative poems. A list of his own, compiled in 1567, shows 4,275 mastersongs, many with original melodies, 1,700 narrative poems, and 208 dramas. Thus, although he did not write for a living, it is clear that literature was his principal occupation.

The image of Sachs as the industrious shoemaker who spontaneously produced poetry after his day’s work is an idealized over simplification This picture of Sachs was evoked by Richard Wagner in his great comic opera Die Meistersinger von Nümberg, first performed in 1868. Wagner’s work and, earlier, the praise of Goethe inflated Sach’s literary reputation in the 19th century. In fact, however, Sachs’ poetic gifts were very limited, and he is much more interesting as a social observer and commentator.