Which flowers are half hardy annual? Half Hardy Annual Flowers List and Care Instructions.

The most popular of the half-hardy annuals include the following flowers. Three daisy-like kinds are the aster, which is named after the Greek word for star; the cosmos, which can easily be sown from seed if it is kept in warmth in early spring; and the dimorphotheca from South Africa, often called the Cape marigold, which is usually yellow, orange or white. Other half-hardy annuals are the scented forms of the tobacco plant, known as nicotiana, and a relation of the tobacco plant, the petunia, a gay plant about two feet high with large bright purple, purplish-red, pink and white flowers that make a good display in the flowerbed. Verbenas and zinnias are also grown for their brilliant colours.

This group of plants includes such favourite garden flowers as Canterbury bells, foxgloves, honesty, sweet williams and wall-flowers. These are true biennials, but there are also perennials that are treated like biennials, being taken up after they have bloomed. Examples are the blue forget-me-not and the antirrhinum or snapdragon.

There are very many perennials, and a large number are grown in herbaceous borders. Most of them can be grown from seed in frames at the end of March or early in April. Some kinds have large seeds which are sown in the open at the end of April or the beginning of May, but usually young plants are grown by division.

Aubrietia is a small purple, mauve, red or white flower which blooms in spring and is planted in clusters in rock gardens.

Catmint, often planted in rockeries and along the edges of flowerbeds, is between two and three feet high with mauve, or sometimes white, flowers.

Columbines, or aquilegia, are hardy plants which like a moist but not wet soil. They have petals ending in spurs and are in many delicate shades of colour. They vary from four inches to four feet high. 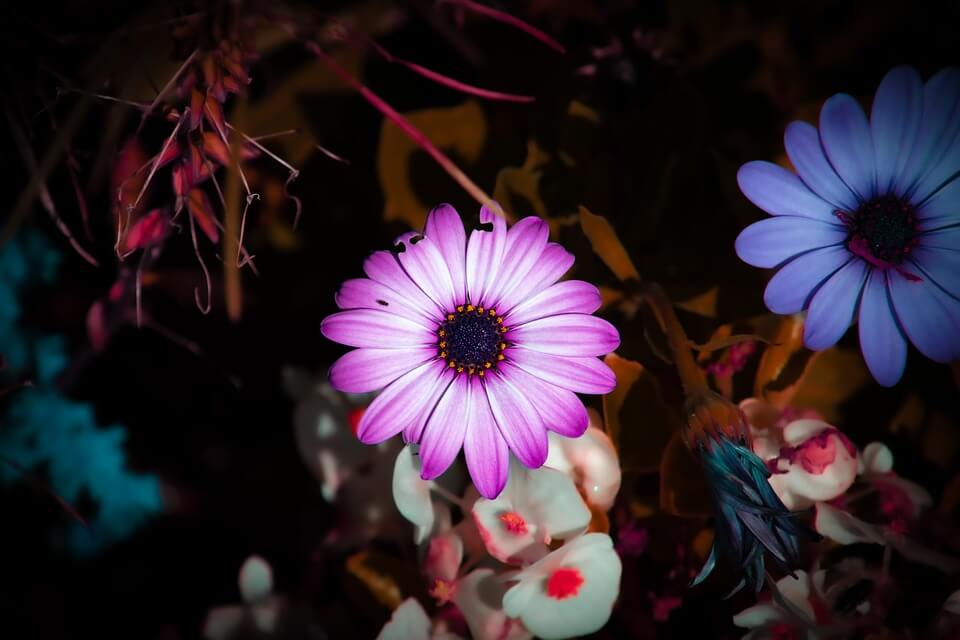 There are many perennial delphiniums, as well as the annual varieties called larkspurs. Their blue spikes may grow as tall as five feet, so they generally need to be fastened to sticks, or else they will be blown down in the autumn.

Geums, which have yellow, red and white flovvers, are good garden plants and will grow well in borders or in rock gardens. They are grown from seeds or by division.

Gentians are mostly small plants about six inches high and the flowers are usually a deep, rich blue. They are, however, rather difficult to grow in English gardens, as they are really mountain flowers, but are often seen in rockeries where they grow in clumps. They should be grown from seed and planted out carefully when the seedlings are large enough to be handled. They need a good deal of water.

The tall gladioli make brilliant splashes in the border in summer. They can be grown from seed, and will flower in the second year in a sunny place on light soil. The flowers are all shades—red, yellow, purple or white.

Flowers that brighten up the garden in autumn are golden-rod and chrysanthemums. Golden-rod grows in tall spikes of small yellow flowers and is increased by dividing an old root. Chrysanthemums can be all shades of yellow, bronze and deep red, or they may be white.

The hellebore flowers include the white Christmas rose, which blooms from January to February. It is best either to cover the plants in the garden with glass to protect them or to bring the flower buds indoors to open. A later hellebore is the Lenten rose, which varies in colour and can be floated on the surface of water in a bowl when it has been cut.

The hollyhock is a very tall plant which generally needs to be supported if it is not to be broken in a wind. It is best grown from seed or cuttings, not by division.

Irises mostly bloom from April to the middle of June, but some varieties are in flower almost all the year round. They are often purple, but may also be yellow, bronze or white. The roots of irises should be dug up and divided every two years or so, and they can also be grown from seeds.

Lavender is grown for its scent rather than its appearance, and the flower-heads are often picked and stored in bags to scent clothes. Lavender bushes must be kept well pruned.

Lilies grow from bulbs and there are many kinds. In June the white, trumpet-shaped madonna lilies are in bloom and in August come the golden-rayed lilies, which are white with a band of yellow, and the tiger lily.

Lupins are generally perennial, although some varieties are annual. They can easily be grown from seed, and some are as tall as four feet, while many colours are now produced. The tree lupin, which flowers in its second year, has flower spikes on a small bush.

Michaelmas daisies are a kind of aster, but, unlike asters, they are hardy. They are generally tall plants, sometimes about five feet high, though there are also dwarf varieties. The flowers, which bloom in autumn, are all shades of purple and mauve and often have yellow centres.

Pansies are pretty flowers for a border, and grow in many different colours, including purple, yellow, copper and almost black. They should be cut often and dead flowers always taken off, as more flowers are then produced.

There are many kinds of peonies, but the double Chinese varieties are generally grown. They are best planted in autumn, and their large red or white flowers show up well in a herbaceous border.

The phlox is a very colourful addition to the border with its red, pink, mauve and white flower heads at the top of a tall stem. The dwarf phloxes are usually brilliant scarlet and are only about a foot high.

In autumn the flowers known as red-hot pokers flower in the garden. The flower heads are a rich red and yellow colour and hang on spikes at the top of a stem which may be 18 inches to 9 feet high. They are not very hardy and should be protected from bad weather.

Sedum is a flower that is useful in borders because it attracts crowds of butterflies, and it is also a rockery plant. The flowers, which are very small and pink, white or yellow in colour, are crowded together in heads.

Solomon’s seal is a striking flower. The heads, which are white and green, hang in small clusters along the stem. New plants are grown by division.

Tulips are elegant flowers in the late spring. They grow from bulbs and do best if they are dug up each year after they have finished flowering and then replanted in the autumn.