Guillaume Farel (1489-1565), French leader of the Reformation. Farel was born of a noble family, near Gap, Dauphine, France, Although destined by his family for a military career, he went to Paris and took up humanistic studies under the renowned Lefevre d’Etaples. In Paris he impassionedly embraced the reform doctrine. 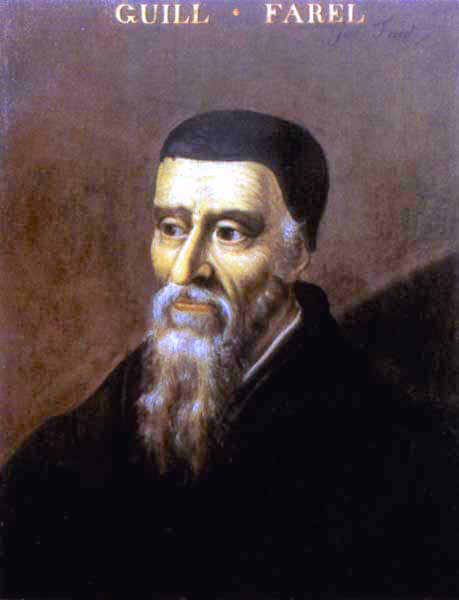 Farel remained in Paris until 1521, when he moved with Lefevre to Meaux, where he preached reform doctrine with such vehemence that he was silenced by the reforming Bishop Briçonnet. In 1524 he Hed to Basel, where he was cordially received by Johannes Oecolampadius, but his fiery tirades against Catholicism caused his expulsion within four months. He drifted to Strasbourg, then to Montbeliard, and finally settled in late 1526 at Aıgle, in the canton of Vaud, where reform was officially received in 1528. Soon he went to Neuehatel and led this area to adopt the reform in 1530.

In 1532, Farel went to Geneva, and in August 1535, Geneva also officially embraced the Protestant reform. One year later he induced John Calvin to take up the work of reform in Geneva. This contact led to a lifelong friendship. After his expulsion from Geneva in 1538, Farel went to Neuchatel, where he spent most of his remaining days. He died there on Sept. 13, 1565.

Farel’s career and his influence on Calvinist theology have been slighted. His Sommaire of 1525 was the first Reformed confession and was the basis of later Calvinist confessions. His views on church polity and church-state relations influenced Calvin.