Guillaume Apollinaire; (1880-1918), French poet, who was one of the major modernists of the first two decades of the 20th century. Apollinaire’s pan-European background, experimental bent, and keen interest in the plastic arts gave him an influential role at a time when symbolism and impressionism were yielding to more extreme breaks with tradition. 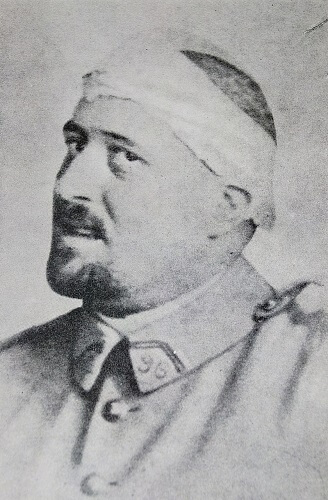 He was born Guillaume Albert Dulcigni (later, de Kostrowitzky), in Rome, on Aug. 26, 1880. The illegitimate son of an Italian father and a Polish mother, he liked to keep his birth a mystery. He was educated on the French Riviera and later traveled widely in Germany and eastern Europe. He finally settled in Paris in 1902 and frequented literary circles while earning a scanty living. Gradually, publication of his poems, and his friendship with young poets and painters, brought him recognition, tinged with scandal when he was arrested in 1911 on suspicion of theft of the Mona Lisa, which had been stolen from the Louvre by Vincenzo Perugia, an Italian. The peak years of his career lie between 1908 and 1914, when he was active in all the arts.

Though not a naturalized French citizen, Apollinaire volunteered for military service in 1914. He trained first with the artillery and then saw frontline service as a lieutenant in the infantry. A serious head wound in 1916 caused him to return to Paris for two operations and a non-combatant assignment. Although he seemed to recover, he was unable to resist the influenza that took his life, in Paris, on Nov. 9, 1918. He had married only six months earlier.

Two collections of poetry, Alcools (1913) and Calligrammes (1918), constitute the most significant part of Apollinaire’s literary work. Alcools, though printed without punctuation and containing a number of modernist poems (for example, Zone), is essentially traditional and lyric in character. It contains the long love poem La chanson du mal-aime, often considered his masterpiece. This poem celebrates his love for Annie Pleyden, an English governess, who had resisted his advances in Germany in 1901. Calligrammes is more deliberately modern in spirit and technique and contains some inspired” war poems as well as calligraphic works whose visual shape corresponds to their subject. He also published a volume of stories and two conglomerate novels.

Apollinaire wrote a large mass of critical and journalistic material. He also brought out semischolarly editions of licentious classics like the works of marquis de Sade and Aretino, and also edited several literary-artistic reviews. The most important of these was Les soirées de Paris (1911-1914), in which he fulfilled his role of champion and impresario of the new artistic schools, cubism, orphism, simultanéisme, and others. Despite a somewhat naïvely enthusiastic point of view, he had a flair for singling out many of the greatest painters of the century long before their names were known, including Picasso, Matisse, Braque, Henri Rousseau, Delaunay, Chagall, and Chirico. His volume The Cubist Painters (1913) is still considered a revealing document. By coining the word “surrealist” in 1917 for the Picasso-Satie-Cocteau ballet Parade, he provided the name for a major artistic movement.

Apollinaire’s work has a marked double orientation toward an unshakable sense of tradition and an arrogant modernism—toward “Order and Adventure” as he himself said in one of his last poems. He remains one of the heroes of the avant-garde in all countries and a lyric poet of beauty and profound significance.