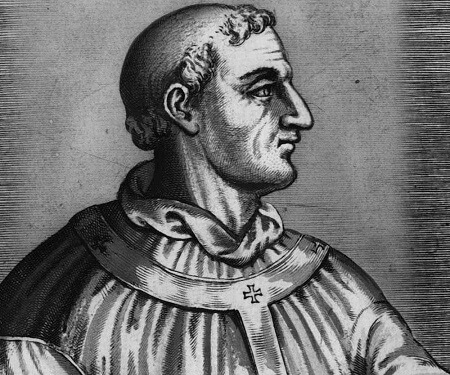 Hildebrand, who was elected Pope Gregory VII in 1073, had a great influence on the Roman Catholic Church in the middle ages. He was born in Tuscany, Italy, some time between 1015 and 1023. During his rule there began the great struggle between church and state, with popes and bishops on one side and kings and lords on the other. It lasted ali through the middle ages and caused many deaths, including that of St. Thomas Becket, who was murdered during his struggle with King Henry II of England.

Gregory VII got on fairly well with William the Conqueror, except when William wanted to make himself master of the church in England as well as of the country itself. The king and pope, however, made up the quarrel.

Gregory’s greatest struggle was with Henry IV, King of Germany. It began when Gregory tried to reform the church in Germany by insisting on two things. The first was that priests should not marry, and the second that priests and bishops should be appointed by the church and not by the king or nobles. Henry IV objected to this very strongly, as half of Germany was in the hands of bishops and abbots. He refused to allow the church to decide what should be done with such a large part of his kingdom.

Henry called the German bishops together, and they declared that Gregory was deposed and no longer pope. Gregory, as St. Peter’s successor, believed that he had the greatest power on earth. Small, weak-voiced, but intensely brave, he replied at once to Henry’s challenge by excommunicating the king. This meant he was shut out of the church and his subjects no longer had to obey him.

Henry’s enemies in Germany turned against him, and he was driven to seek Gregory’s forgiveness. He crossed the Alps in January 1077, during a bitterly cold winter, and went to meet Gregory at the castle of Canossa. Before Gregory would see him, however, Henry had to wait for three days in the snow outside the castle, with bare feet and wearing only the woollen garment that penitents (people who are sorry for their sins) had to wear.

Having been forgiven by Gregory, Henry was respectable again in the eyes of his people, and he recovered his power and turned against the pope again. Gregory dethroned him and caused a rival king to be elected in Germany. Henry then persuaded a council to elect a rival instead of Gregory.

Gregory finally turned for help to the Normans who had settled in south Italy. These Normans drove Henry out of Rome, but they sacked (plundered) the city more brutally th even the Goths and Vandals had done. This annoyed the Roman population that they turned on Gregory, who had to go into exile. He died in the Italian town of Salerno a year later, saying words which became famous – “I have loved righteousness and hated iniauitv therefore I die in exile.”

Although Gregory seemed to have failed, men remembered how Henry IV, the greatest prince of the western world, had been humbled by the pope, and the power of the church inereased. In the 17th century Gregory became known as a saint.