Grape; One of the oldest fruits cultivated by man is the grape, and from it he has made wine for thousands of years past. There are records showing that vines, the plants that produce grapes, were planted by the Egyptians between 5,000 and 6,000 years ago, and in Greece grape seeds have been found in prehistoric tombs and grape-growing was carried on in Homer’s time. There are many references to grapes and wine in the Bible.

Grapes may be grouped as wine grapes, table grapes, raisin grapes, sweet juice grapes and canning grapes, according to the way they are used. All varieties will produce wine if their juice is fermented, but only under certain conditions of soil and climate will they produce really good wines. The Mediterranean countries and Portugal, France, Germany and North America grow grapes for wine, as also do South Africa and Australia. These countries also produce table grapes (to be eaten for dessert), and Belgium specializes in growing table grapes in glasshouses. Muscat of Alexandria, Black Hamburg and Gros Colman are among the best known table grapes. 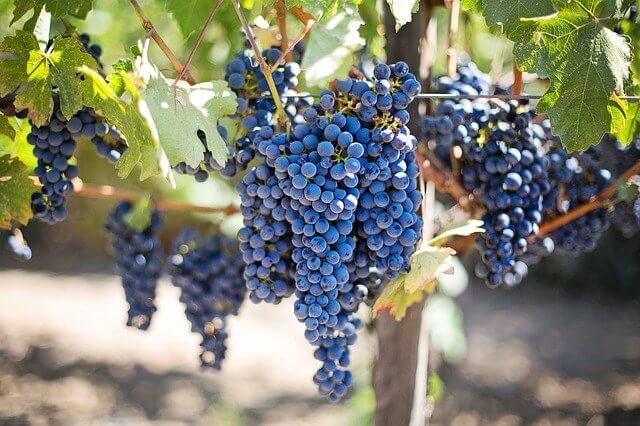 In some places, particularly Greece, South Africa, California and Australia, certain varieties, some of them seedless, are dried and made into raisins, currants and sultanas. Sweet juice grapes are grown for grape juice, which does not contain alcohol and tastes like fresh grapes. Canning grapes, which are seedless, are canned with other fruits to make fruit salads and fruit cocktails.

Long hot summers with little rain are needed for grapes to grow and ripen properly. In England the summers are usually too wet and cold to produce good crops of grapes out of doors, but they can be grown in glasshouses, called vineries, or against sheltering walls.

Vines were probably first grown around the Caspian Sea, north of Persia, and from there they spread until today they are cultivated in every place where the climate is suitable. At one time they were grown a good deal in England, and were probably brought there by the Romans. Gloucestershire and Worcestershire were important grape-growing counties, and the isle of Ely was called the isle of Vines by the Normans. After the monasteries were dissolved, or shut down, in the ı6th century, the grape industry in England began to die out. During the last 300 years grapes have been cultivated in South Africa, America and Australia.

Vines are deciduous (they shed their leaves in winter) and climb by means of clinging parts called tendrils. The flowers, which are small and greenish, grow in clusters that later become the bunches of grapes. The fruit is a berry and may be purplish-black, pale green or red. Vines live to a very great age. There is one, known as the great vine, in Hampton Court, near London, which was planted in 1768 and still bears crops.

In Europe and most other parts of the world the Old World vine, called Vitis vinifera, is grown. There have been many attempts to grow this vine in North America, but they have been successful only in California. The climate of North America does not suit these vines, and a small insect called phylloxera attacks the roots and kills the plants. Fortunately, however, there are several kinds of vines which grow wild in North America, and these can resist the attacks of phylloxera. These New World vines, when wild, have smaller fruits than the Old World kind, but they have been cultivated and are now widely grown in the eastern United States. 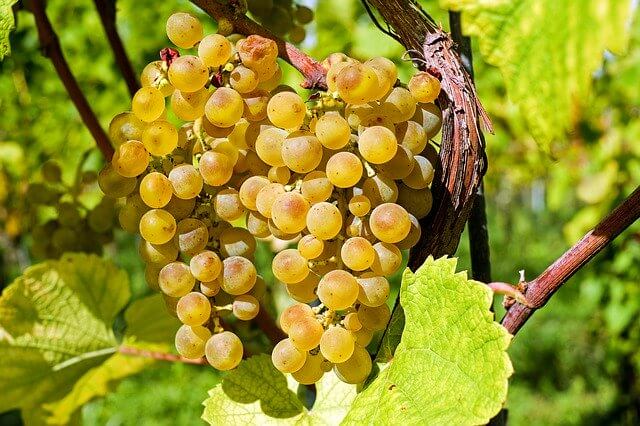 In about 1863 it was noticed that vines in England and France were also being attacked by phylloxera. The pest spread so rapidly that in many countries it seemed that all the vines would die and the grape industry would come to a stop. However, the vineyards were saved by being replanted with vines grafted on to root-stocks of the American vines that could resist phylloxera. In Europe the most serious disease of grapes is mildew.

Vines may be grown on most types of soil, provided these are well drained. Deep, fertile soils are best for grapes that are grown to be eaten for dessert, but some wine varieties produce better grapes when grown on shallow, rather poor soils. In many wine-producing countries vineyards are often planted on terraces on steep hillsides where the ground has to be cultivated by hand; here the vines are planted only a few feet apart. Travellers along the Rhine, for example, can see many miles of vine terraces along the river. In areas such as California and Australia, where vineyards are planted on flat ground, machines can be used for cultivation and the plants are spaced farther apart.

There are many different ways of training vines. In some places they are grown like bushes and not given any support. In others they are trained along wires or up posts or even over trees. The fruit is produced on the young shoots and pruning is a very specialized art. Where it is not necessary to graft vines, as a safeguard against phylloxera, they may be grown from cuttings or from single buds known as “eyes”.