Goose; Geese are larger, more powerful birds than ducks, with longer necks and loud honking cries. The male is called a gander and the word goose should really be used only for the female, although in everyday speech it is used for both sexes. Both look alike in each species, or kind, of goose.

Wild geese spend less of their time in the water than ducks do and more on land, where they feed on grasses, crops and other plants. They are very wary and difficult to approach, and one bird usually stands guard alone to give warning of danger to those that are feeding. A flock of geese on the ground is called a gaggle, but when flying in typical V-shaped formation, usually with an old gander in the lead, the flock is known as a skein. It one nature’s more thrilling sights. Wild geese of the northern hemisphere nest mostly in arctic regions and then fly hundreds of miles to spend the winter in countries farther to the south. Each pair stays together for life, returning every year to the breeding grounds. The nest is usually built on the ground or on a cliff edge, and while the female sits on the eggs the gander stands on guard near by, later helping to look after the goslings, or young ones. In North America the Canada goose sometimes lays its eggs in the old nest of some bird of prey high up in a tree.

During the winter seven visiting species of geese are seen regularly in the British Isles and can be divided into two groups, the grey geese and the black geese. The grey geese are all much alike, being very like the ordinary farmyard goose, but they vary in size and in the colour of their beaks and legs. The grey lag goose, which is sometimes well over 30 inches long and shows in flight a pale blue patch on the front of the wing, is the only species that breeds in the British Isles, nesting in small numbers in Scotland. The pink-footed goose has a head which is darker than the rest of its body, and sometimes its legs are a very bright pink, whereas the bean goose has orange-coloured legs. Both the white-fronted goose and the lesser white-fronted goose, which is smaller and rarer, get their names from the noticeable white patch just above the bill.

The barnacle and brent geese are both black geese. The barnacle goose has a very smart black, white and grey plumage, and its creamy white face and forehead show up well against the black neck and breast, whereas the smaller brent goose has only a small whitish patch on the side of its black neck.

The Canada goose, which is a large grey-brown bird with a black neck and a patch of white on the sides of the head and under the chin, is also found in many parts of Great Britain, but this is only because it was brought there as a tame bird in the 17 th century. Several beautiful snow geese, which are white all over except for the black tips to their wings, have been seen in the British Isles and some of these were wild ones blown across the Atlantic by the wind. Arctic Canada is the home of many geese, including the blue and Ross’s geese and also the white-fronted kind seen in the British Isles. 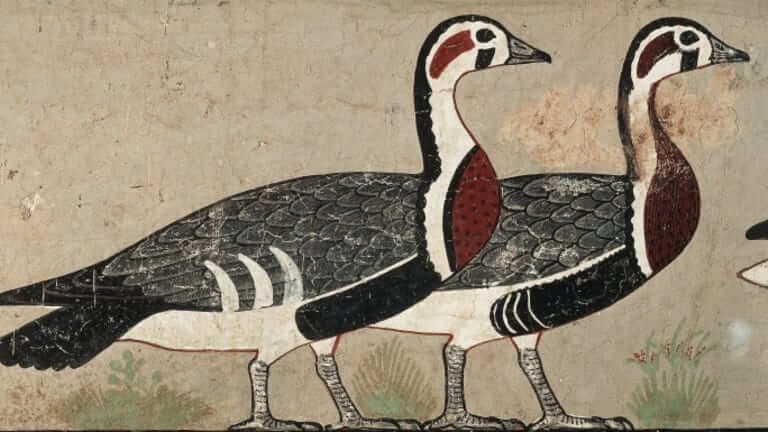 The ancient Egyptians decorated their walls with pictures of the red-breasted goose, which they probably kept as a pet, and the Greeks kept geese both as pets and for profit over 2,500 years ago. These geese were undoubtedly descendantsi of the wild grey lag goose, as are most of the farmyard geese today.

The Romans carefully bred these geese and eventually produced a stock of pure white birds which were larger and laid more eggs than the wild ones. Geese are excellent “watch-dogs”, for they make a noise as soon as anything disturbs them. This was well known to the Romans. In about 390 B.C. the Gauls made a surprise attack by night on the hill-fortress of Rome called the Capitol. The geese there warned the Romans by their cackling.

The ancient Britons kept grey lag geese as pets, but did not eat them. In the middle ages, however, when many wild ones bred in the fens of eastern England, numbers of these birds were killed for food, while it is believed that others were caught and tamed, to become the ancestors of our domestic geese. Because of this and the drainage of the fens, the birds nested there no more after the early part of the 19th century. As the number of wild geese was reduced, so it became more profitable to keep tame ones, and huge flocks were soon being reared in Lincolnshire. The farmers drove them to market several thousand at a time and the geese often had to waddle as much as eight or ten miles a day on the journey. The birds were not only used for food. Their feathers were plucked as often as five times a year to provide down for pillows and mattresses, the quills also being used as pens until nearly half way through the 19th century.