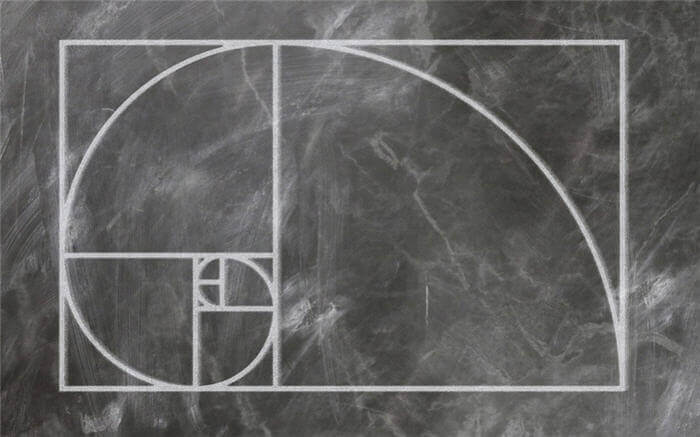 GOLDEN SECTION, a geometric proportion of ancient origin. When a line AB is divided at a point C such that AC:AB = CB:AC, we say that the line is divided in extreme and mean ratio. Such a division is also called the “golden section” or “divine proportion.” When AC = r, AB = 1, then r:l = (1 — r):r, or

= 0.618 …. Euclid, who in his Elements showed how to construct the golden section by means of compass and straight-edge, used this proportion for the construction of the side of the regular polygon of 10 sides, which is ar when the radius of the circumscribed circle is a.

The diagonals of a regular pentagon intersect in the ratio of l:r:l, and we also meet the golden section in properties of regular solids, notably the dodecahedron. If we take a rectangle whose sides have the ratio 1 :r and remove a square on the shorter side r, then the remaining rectangle again has the ratio 1 :r. The number r is the limit of the continued fraction

of which the partial fractions

Ever since antiquity the golden section has attracted the attention of mystics and artists. its appearance in the diagonals of a regular pentagon connects it with the pentagram, an age-old magic symbol (see Goethe’s Faust, Fart I, Act I, scene 1). Johannes Kepler, in 1611, saw in the golden section “an idea used by the Creator to generate the similar from the similar.” its aesthetic value was stressed by the mathematician Luca Pacioli in his book Divina proportione (1509), illustrated by Leonardo da Vinci.

Several authors of the 19th and 20th centuries have also observed this aesthetic principle in certain works of art—in sculpture, painting, and arehiteeture—and in anatomy and other forms and patterns of nature. A reetangular frame with sides in the ratio of the golden section or a vertical division in this ratio are said to have a parti-cular beauty. A similar claim, originating with Plato, has been made for the ratio

, which is present in a rectangle formed by the two halves of an equilateral triangle, is approximated by

, and has a value of 0.577. Another ratio, thought since ancient times to have unusual beauty, is

. From experiments conducted by the physicist and psychologist Gustav Theodor Fechner on the appreciation of rectangular frames (Vorschule der Aesthetik, 1876), it may be deduced that a ratio close to the golden section actually has a special aesthetic appeal.