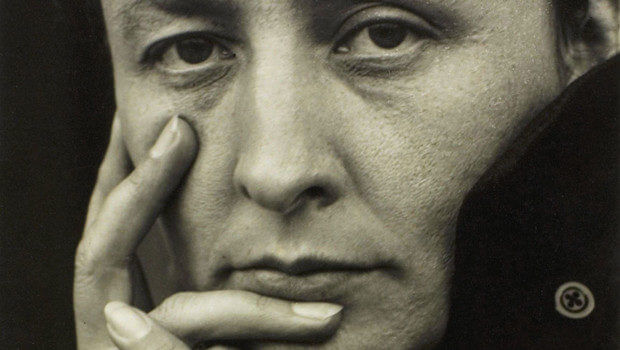 Georgia O’Keeffe; American abstract painter : b. Sun Prairie, Wis., Nov. 15, 1887. Taking natural objects such as rocks, bones, clouds, and flowers for her subject matter, she reduced them to their simplest form, often by employing a close-up view, or some other unusual vantage point. With such techniques, including the use of thin paint and clear colors to emphasize a feeling of mystical silence and space, she achieved an abstract, almost Oriental simplicity in her paintings.

Between 1904 and 1908, Georgia O’Keeffe studied at the Art Institute of Chicago and at the Art Students League in New York. In 1912, when she took a summer course in painting from Arthur Dow, she came under the influence of Oriental artistic principles. From 1912 to 1918 she taught art in Texas.

In 1916, Miss O’Keeffe sent some drawings to a friend in New York, who showed them to Alfred Stieglitz, the photographer and founder of the progressive 291 Gallery. Stieglitz exhibited the drawings, and in 1918, when Miss O’Keeffe moved to New York, he introduced her to the circle of painters (John Marin, Marsden Hartley, Arthur Dove, Charles Demuth, and others) whose works were seen regularly at 291. In 1924 she and Stieglitz were married.

During the late 1920’s, Miss O’Keeffe painted a series of very lyrical close-ups of flowers. Two of the best known are Black Iris (1926) and Black Flower and Blue Larkspur (1929), both in the Metropolitan Museum of Art, New York. Also dating from this period are a number of paintings of New York City and the East River.

Miss O’Keeffe spent a summer in New Mexico in 1929, and the bleak landscape and broad skies of the desert so appealed to her that she settled there permanently after Stieglitz’s death in 1946. Cows’ skulls and other bare bones found in the desert were frequent motifs in her paintings. Other common subjects included flowers, the sky, and the horizon lines of the desert. Following a three-month trip around the world by plane in 1959, the sky “paved with clouds” as seen from an airplane also became one of her favorite motifs, and the subject of her largest work, a 24-foot mural that she began in 1966. Major retrospective shows of her work were held at the Museum of Modern Art, New York (1946), the Dallas Museum of Fine Arts (1953), and the Worcester (Mass.) Art Museum (1960).