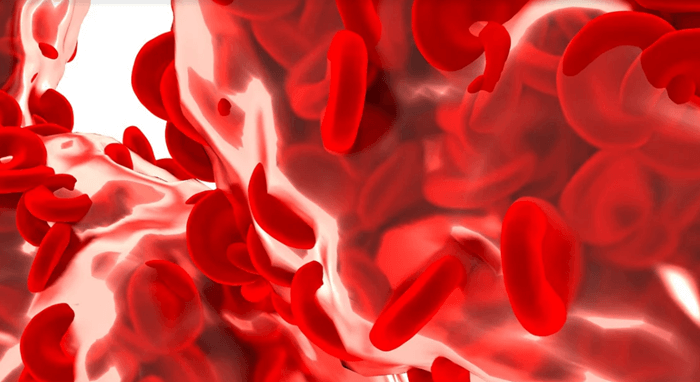 Hemoglobin; Each red blood cell contains a large amount of hemoglobin, a protein pigment that is able to bind oxygen molecules in a loose combination. When carrying a full load of oxygen, the hemoglobin, then called oxyhemoglobin, gives the blood its bright red color. In a person of average size there are about 7501 grams (26 oz) of hemoglobin, with each gram carrying 1.35 milliliters (0.04 oz) of oxygen. Thus, the total amount of oxygen carried by the blood is about 1,100 milliliters (36.3 oz); this is about the amount that would be consumed in a minute of exercise.

After hemoglobin has delivered its oxygen to the tissues, the blood becomes darker and slightly bluish. On its return trip to the heart, the hemoglobin picks up a small portion of the carbon dioxide that is produced by the cells as a waste product of metabolism. As the red blood cells pass through the capillaries of the lungs, the carbon dioxide is released and oxygen is picked up.

Hemoglobin contains two kinds of components: heme, a red protoporphyrin pigment containing iron, and globin, a colorless protein. Each hemoglobin molecule consists of one molecule of globin bound to four heme groups, with each heme group containing one atom of iron in a bivalent state. Because each gram of hemoglobin contains 0.335 milligrams (1/10,000 of an ounce) of iron, the circulating hemoglobin holds a large portion of the body’s iron.

At birth, the blood of a baby has larger red blood cells and contains slightly more hemoglobin than the blood of an adult. In the first month of life, the amount of hemoglobin decreases sharply and the body produces smaller red cells. The hemoglobin content remains low for about a year. Then a rise begins, and adult values of 14 or 15 grams (0.5 to 0.52 oz) per 100 milliliters (3.3 oz) are reached in the early teens.