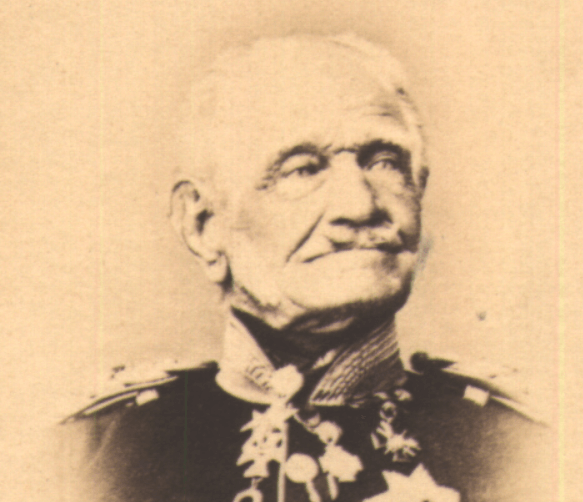 Friedrich Graf von Wrangel; (1784-1877), Prussian field marshal. He was born in Stettin, Germany (Polish, Szczecin), on April 13, 1784. He fought in the Prussian army against Napoleon. In 1834 he was given command of a division at Miinster, where he put down a demonstration by partisans of the archbishops of Cologne against the policy of the king of Prussia.

In 1848 he was commander in chief of the German federal army that drove the Danish troops from Schleswig-Holstein. Under pressure from other great powers, Prussia ended the war with the indecisive armistice of Malmo (August 26). The German people, who had strongly supported the struggle, disapproved of the settlement, and riots occurred in Berlin. Frederick William IV ordered Wrangel to surround Berlin, and on November 10 his troops entered the city. Disorder was suppressed, and the Prussian National Assembly was forbidden to meet again in Berlin.

In 1856, Wrangel was created a field marshal. In 1864, at the age of 80 and almost senile, he was given command of the Austro-Prussian troops that invaded Schleswig. When the aged marshal proved to be a poor strategist, Gen. Hel-muth von Moltke was sent to act as his chief of staff and, in fact, assume his command. Wrangel was then replaced by Prince Frederick Charles.

Wrangel was retired with honors and raised to the nobility. Thereafter he served as adviser without command in the Seven Weeks’ War in 1866 against Austria. In his later years he interested himself in the reorganization of the army. He died in Berlin on Nov. 1, 1877.