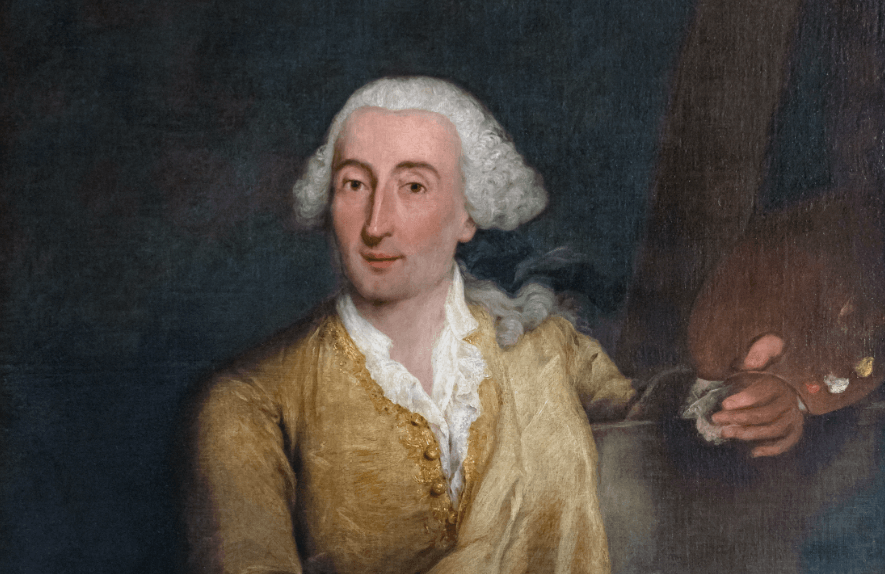 Francesco Guardi; (1712-1793), Italian painter. His favorite subject was the city of Venice, either in exact views or in imaginary visions, and he is rivaled only by Canaletto in this field.

Guardi was born in Venice on Oct. 5, 1712, into a family of painters. He probably had his early training from his older brother Gian Antonio Guardi (1699-1760), who assumed charge of the family studio after the death of their father in 1716. Francesco’s early career is obscure; he assisted his brother and undertook occasional independent work. A notice of 1764 refers to him as a pupil of Canaletto. Uncertain as the citation’s meaning is, it does establish that he was already known as a view painter.

In 1784, Guardi was elected to the Venetian Academy of Fine Ar.ts as a painter of architectural subjects. Despite commissions and critical recognition, he enjoyed only a limited reputation even at the time of his death, in Venice, on Jan. 1, 1793.

Guardi was the only 18th century painter of views and landscapes to abandon the neat conventions of architectural painting in favor of an extremely loose, rapid style of drawing in crisp impasto that only suggests forms and contours. This device he applied over irregular, sketchy patches of color, the result being a shimmering vision of Venice, in which shifting light, refracted through humid air and reflected from moving water, glitters over or dissolves stained masonry. The acute sense of the vulnerability of man’s work in the face of time and the elements, the vast spaces the small and isolated figures, and the unreliable light invest his paintings with a poignant, romantic melancholy. Canaletto celebrated the glory of Venice’s history and accomplishments; Guardi, with an altogether more modem sensibility, perceived and caught the city’s unique beauty.

Until the age of fifty, he exercised only a subordinate role in the studio of his brother Gianantonio , a painter of religious paintings. After the death of the latter, he then turns to the veduta.

Along with Canaletto, he is the painter par excellence of vedute , those picturesque and meticulous “views” of Venice, a pictorial genre which flourished fully in the 18th century . But he quickly developed his own style, based on a freer handling of paint. He took particular pleasure in rendering the vibrant atmosphere of Venetian light and its dazzling effect on water. Guardi’s more “impressionistic” approach also found expression in small-scale imaginary scenes or “caprici”.

The shortage of well datable views prevents the establishment of a satisfactory chronology. The problem is further complicated by the many repetitions of his compositions. Like his first views, these capricci are derived from those of other artists, in this case Marco Ricci (1676-1729) and Luca Carlevarijs , and often adopt entire compositions or specific ruin and landscape elements.

Guardi also chronicled major events in the Venetian Republic, such as his paintings of the visit of the Condi dei Nord , Grand Duke Paul of Russia and Maria Feodorovna , commissioned by the Republic to commemorate their visits (divided between Alte Pinakothek, Munich and various private collections). He was also commissioned for the set of Twelve Ducal Feasts (1770-1775) painted in honor of Doge Alvise IV Monicego . He was inspired for these paintings by engravings by Giambattista Brustolon (1712-1796) made between 1766 and 1768 from drawings by Canaletto.

In 1782 he was commissioned to paint the four canvases to commemorate the visit of Pius VI to Venice. At the same time he was asked to relate the celebrations in honor of the “Counts of the North” passing through the Serenissima. He also painted numerous canvases illustrating regattas. He also specialized in painting altar fronts with flowers and floral motifs, which were often used on the edges of his compositions.

If the paintings of Francesco Guardi are not understood by the Venetians, they meet with great success abroad. His vedute are the pretext for an unusual description of Venetian monuments which are bathed in silvery light. His vision of Venice influenced that of the great painters who used this city as a source of inspiration ( Turner and Monet among others).