Ferdinand Foch; (1851-1929), French marshal, who was supreme commander of Allied armies in France in World War I. He was born in Tarbes on Oct. 2, 1851, and educated at the Jesuit Collège Saint-Clement at Metz before enlisting in the infantry in the Franco-Prussian War. In 1871 he enrolled in the École Polytechnique in Nancy, and was commissioned a lieutenant two years later when he joined the 24th Artillery Regiment. He entered the École Supérieure de Guerre in 1885, then made the rounds of assignments in France.

In 1895, as an instructor in military history at the École Supérieure de Guerre, Foch delivered a series of lectures, subsequently published as Principes de la guerre (1903) and Conduite de la guerre (1904). His military philosophy stressed the transcendence of the moral factors over the material. The art of war, he asserted, is simple, logical, mathematical. “War, positive in nature, admits of only positive solutions; no result without a cause; if you want an effect, develop the cause. In war the fact has precedence over the idea, action over the word, execution over theory.”

The key to Foch’s strategy was his conviction that “the offensive is the law of war.” The great captain is one who can transmit his dynamism to his troops but also minimizes bloodshed.

Foch’s ardent Catholicism held back his promotion during the Dreyfus affair, but in 1907 the anticlerical Premier Georges Clemenceau made him director of the École Supérieure de Guerre in full knowledge that Foch’s brother was a Jesuit. “The Tiger” was determined to place France’s army above politics by this symbolic appointment. 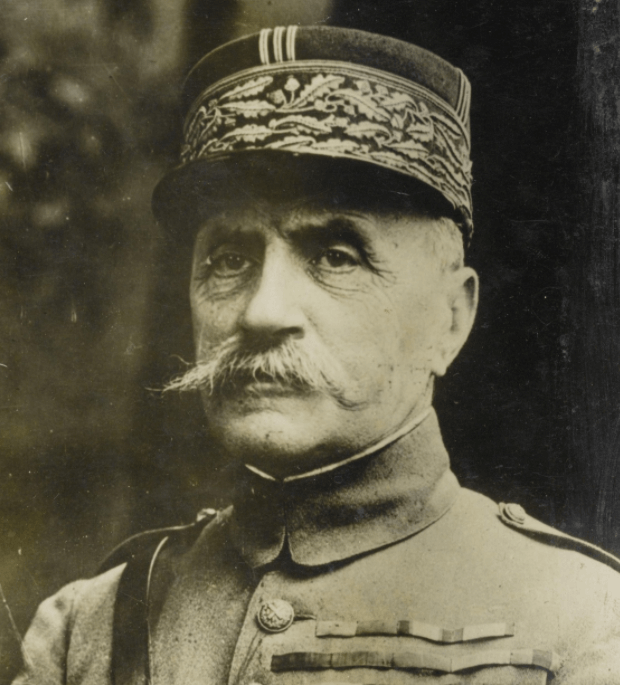 On the outbreak of World War I, Foch was a general, commanding the 20th Army Corps at Nancy. After the French reverse at Morhange in August 1914, he was assigned by Gen. Joseph Joffre to the command of a new army, the 9th, which was to maintain liaison between the retreating 14th and 5th French armies.

When the French and British forces made their decisive about-face at the Mprne on Sept. 6, 1914, and began counterattacking, General Foch’s 9th Army was ordered to cover the flank of Gen. Louis Franchet d’Esperey’s 5th Army by holding firm at the marshes of St.-Gond. German Gen. Karl von Biilow threatened to stave in Foch’s right wing, but Joffre sent a corps to reinforce it, while Franchet d’Esperey helped shore up Foch’s left flank. The formidable pressure on the 9th Army was relieved by Billow’s order for a general retirement on September 9.

In the ensuing “Race to the Sea,” Joffre, who had been impressed by Foch’s furie française, made him his assistant in the north to coordinate the action of the French, British, and Belgians— a difficult task in view of the absence of a unified command. Foch displayed toward the choleric British Marshal John D. P. French the same tact-fulness that was to characterize his subsequent relations with the American Gen. John J. Pershing.

Foch was in command of the Army Group of the North when the Germans made their first gas attack at Ypres, Belgium, in April 1915. The failure of Foch’s subordinate, General Putz, to support the hard-pressed British Gen. Sir Horace Smith-Dorrien created bad feeling and clouded Foch’s own reputation. Foch’s unquenchable optimism and his faith in the attack were not enough to overcome German strength in the sodden terrain of Artois, and the French suffered heavy casualties in the spring and autumn offensives of 1915.

Foch had no greater success in the Battle of the Somme in July 1916. Many of his reserve divisions, expected to reinforce his Army Group of the North, had to be diverted to Verdun. Joffre’s removal as commander in chief carried Foch into eclipse with him. But in May 1917, when Joffre’s successor, Gen. Robert Nivelle, was disgraced by his foolhardy Chemin des Dames campaign, Henri Pétain was. made general in chief, and Foch emerged as his chief of the general staff.

Foch’s Italian planning experience qualified him for appointment by the Supreme War Council as commander of the inter-Allied, or General, Reserve. Pétain and the British Gen. Sir Douglas Haig were reluctant to furnish divisions to the General Reserve, and consequently Foch lacked the resources to seal the breach brought about by the massive German breakthrough of March 21, 1918. When it appeared that Haig might have to retreat to the English Channel and Pétain toward Paris, an Anglo-French conference was held at Doullens on March 26, and Foch was named generalissimo of French and British troops on the western front. “His command was soon extended to the Belgian and American forces.

Foch was caught off guard by the German attack of May 1918, but reinforced by Pershing’s American army, began a formidable counterattack on July 18. He maintained its momentum until Nov. 11, 1918, when he dictated armistice terms to the German delegation at Compiègne.

After the war, Foch was elected to the French Academy and honored, on an American tour in 1921. He died in Paris on March 20, 1929, and was buried in the Invalides.