FATHERS AND SONS is a novel written by Ivan Sergeyevich Turgenev in 1860-1861 and published in the magazine Russian Herald in 1862. It analyzes in the clear, pure prose of critical realism the conflict between generations in Russia on the eve of the emancipation of the serfs in 1861. 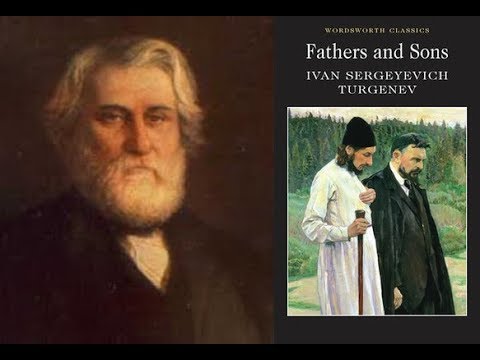 Turgenev’s portrait of the nihilist hero, Bazarov, aroused enormous controversy; radicals felt that it slandered the true nihilists, some saying that it caricatured the critic Nikolai Dobrolyubov, while conservatives found it too sympathetic to nihilism. Dostoyevsky said that Fathers and Sons was worth all of Turgenev’s earlier work; the Russian critic Maksim Antonovich called it “a political tract in dialogue.” It is now regarded as Turgenev’s masterpiece.

As the novel begins, university graduates Arkady Kirsanov and his friend, the medical student Yevgeni Bazarov, arrive at the estate of Arkady’s father, Nikolai. A conflict develops between the young men and the older generation, represented by Nikolai (a widower and the father of a child by his serf girl Fenichka) and his brother Pavel. At a ball the young men meet a young widow, Arına Odintsova; later, calling on her, they meet her younger sister Katya.

When the young men retum to the Kirsanov estate, Bazarov, true to his beliefs in rationalism, reform, and science, argues with the older Kirsanovs. Pavel challenges him to a duel and is accidentally wounded. Bazarov seems to court Anna Odintsova, but he finally rejects her to devote his life to medicine. Subsequently, while dissecting the corpse of a peasant who died of typhus, he cuts his finger and contracts the disease, of which he dies. Nikolai marries Fenichka; Arkady marries Katya, who bears him a son. The novel thus closes with the implication that the conflict between the young and the old, like the conflict between ideals and habits, must go on and on.