Far From The Madding Crowd; a novel by Thomas Hardy, published in 1874, tells a story of rural life and love in Dorset. As the story begins, Bathsheba Everdene, capable, romantic, and vain, is an orphan living with an aunt. When Gabriel Oak, a prosperous sheep farmer, proposes, she almost accepts him but draws back when he pictures married life as soberly domestic. Circumstances reverse their fortunes. Bathsheba inherits a large farm, and Oak loses his. He becomes her shepherd, faithfully trying to guide her and guard her interests. 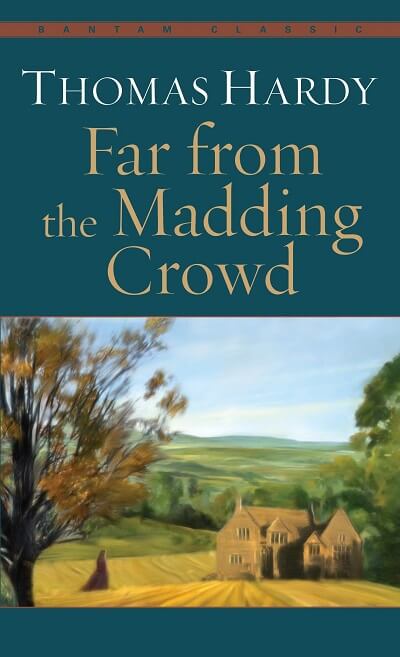 Piqued when Boldwood, a wealthy farmer, pays her only formal attention, Bathsheba sends him a valentine inscribed “Marry Me.” As a result, the solemn Boldwood idealizes her and offers her everything except Hattery. Then Bathsheba meets a dashing sergeant, Francis Troy, who so Hatters her that she marries him. But before his marriage Troy had seduced Fanny Robin, who now dies in childbirth. Discovering the facts, Bathsheba confronts Troy, who declares that Fanny was his true love. He disappears and is supposed drowned.

After a time, Bathsheba promises to marry Boldwood. Troy reappears just after she accepts Boldwood’s ring, and Boldwood in despair shoots Troy. Boldwood is tried for the murder and sent to a mental institution. Oak resolves to emigrate, but Bathsheba realizes she cannot do without him, and so they are married.

The scenes of the novel are actual places near Hardy’s home, though given fictitious names. Besides analysis of capricious Bathsheba and her lovers, Hardy presents their rural milieu in faithful detail. The message is the lesson Bathsheba learned from painful experience-to value Oak for his candor and comradeship. The novel is rich in poetic suggestion and the earthy wisdom of farm laborers. It was filmed in 1967.