Ions are particles (atoms or molecules, ie combinations of domains) whose electrical composition stopped being neutral from a combination in which it lost or gained electrons modifying its endowment, and making it no longer equivalent to that of protons .

Thus, the ions have a net electric charge that can be positive, in which case they are called cations (where the neutral atom has lost one or more electrons), or they can have a negative charge called anions (where they gained one or more electrons). At an ambient temperature, the ions that have an opposite sign join together strongly, starting from an ordered scheme that has a shape similar to that of a crystal. 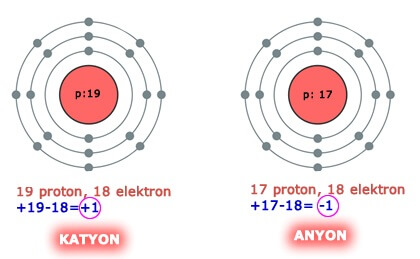 The anions, in turn, can be divided between those that have a negative type oxidation state (known as monatomic) and those whose oxidation state can vary in each atom, called polyatomic. The first are, usually, non-metals whose valence was completed from a gain of electrons; the polyatomic, on the other hand, are acids that lost protons or molecules that added electrons.

The following list exemplifies a series of anions that are frequent in nature, highlighting the number of electrons that win:

The cations, on the other hand, are the positive ions characterized by having an electron deficiency in the outermost orbitals. Normally it is metal, although sometimes there are no metals that act as cations. The size of these cations is smaller than that of the neutral atoms and that of the anions, because the loss of electrons occurs specifically in the outermost part.

The following list shows some frequent cations, dividing according to the amount of electrons lost in each case:

Cations that lose an electron