Eugène Delacroix; (1798-1863), French painter, who was a prominent leader of 19th century romantic painting. Today he is equally renowned for his literary talent, especially for his famous Journal. Delacroix’s contribution to the next generation of painters was mostly indirect. His role was to open the way for impressionist color and to initiate the spirit of freedom that characterizes modern art.

Ferdinand Victor Eugène Delacroix was born at Charenton-St.-Maurice, near Paris, on April 28, 1798. While studying with the artist Pierre Guérin, a minor follower of Jacques Louis David, he vacillated briefly between a writing and a painting career. He was greatly influenced by his close friend, the painter Théodore Géricault, whose Cavalry Officer ( 1812; Louvre, Paris) became the inspiration for young painters imbued with the romantic spirit of pessimism, violent action, and liberty. 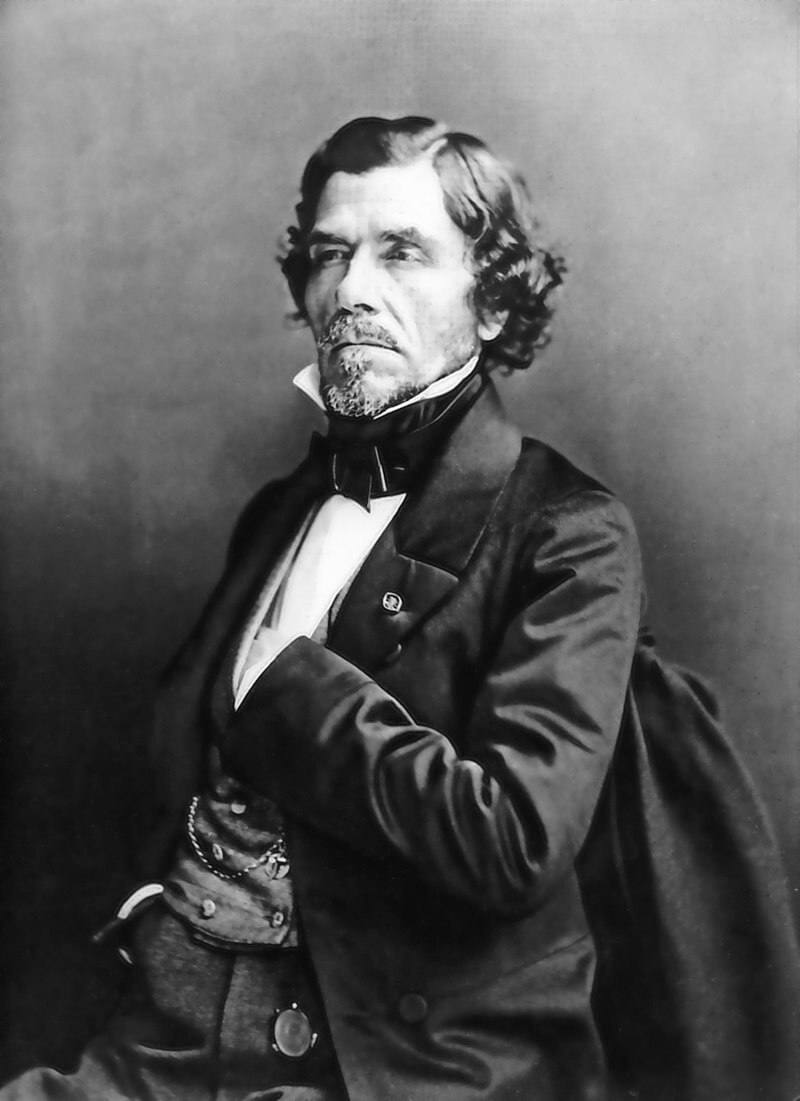 In 1822, Delacroix’s dramatic Dante and Virgil in Hell (Louvre) was accepted by the Paris Salon, but it was not until the salon of 1824 that he achieved popular success. That year many English paintings were shown, and the exhibit became known as the “Salon of the English.” Delacroix saw the English paintings before the actual opening, and he repainted his entry, The Massacre at Chios (Louvre), in the brightened colors of the English works. The painting won him popularity, not so much because of its heightened colors as because of its scene, which portrayed tortured nudes in an incident during the Greek struggle for independence from the Turks. Delacroix achieved an even greater success with The Death of Sardanapalus (1827; Louvre ), a historical canvas depicting the Oriental king after his defeat in battle, with his worldly goods being destroyed by his slaves.

Delacroix’s semiallegorical portrayal of the July Revolution of 1830, Liberty at the Barricades (1830; Louvre), appealed to the romantics for its obvious exaltation of liberty—not just political freedom but liberty in general. This work established the clear division—color against line —between romanticism ( Delacroix ) and classicism ( Ingres ). Soon after the revolution Delacroix spent some time in Morocco, Algeria, and Spain, where he freed himself from the last vestiges of his academic training.

Delacroix’s color was influenced by the works of the English landscapists Constable, Turner, and Bonington, who became his friend. He illustrated the works of his favorite British authors, Scott and Shakespeare. Exploring the macabre and the satanic world, he illustrated Goethe’s Faust and, influenced by his trip to Spain, copied and extemporized on Goya’s “Caprichos.”

Delacroix painted murals for the town hall of Rouen (1840) and, in Paris, for the libraries of the Chamber of Deputies and the Senate ( 1837-1847), for the ceiling of the Salon d’Apollon in the Louvre (1849), and for the Chapel of St. Sulpice (1857-1861). Although the studies for these murals of his later years are full of vitality, there is a certain dryness in their execution. Delacroix died in Paris on Aug. 13, 1863.

Delacroix’s painting technique helped pave the way for the impressionists. In the tradition of Titian, Rubens, and Watteau he divided his hues into patches of complementary color, applied with a nervous, agitated sweep of the brush. This active brush-stroke and “broken color” may be seen in The Lion Hunt ( 1834; Museum of Fine Arts, Boston), one of his many fine paintings of animals.

Delacroix’s writings, in addition to his Journal, include four volumes of letters and numerous articles in which he expressed his ideas on art, government, and other aspects of life. For example, he advanced ideas about the possible superiority of primitive peoples over civilized urbanités, a concept later acted upon by Paul Gauguin, the painter who fled European civilization for the South Seas.