EROSION is the wearing away and removal of soil and rock fragments at the surface of the earth by wind, water, ice, or other natural agents.

It is part of the process known as gradation, which besides the wearing away of rocks to form sediments also involves the transportation and eventual deposition of the sediments. Working together, the processes of erosion and deposition have done mueh to shape the earth’s surface.

Erosion is part of a cycle of geological events that may be complemented by processes that originate beneath the earth’s surface. For example, mountain ranges are first raised by great crustal movements and are then slowly wom away by the agents of erosion. Such cycles flave been repeated many times in the earth’s long history.

The effects of the agents of erosion are in many ways more important to man than are those of such geological phenomena as volcanic eruptions and earthquakes, although they are usually not so striking. This is particularly true or the role of erosion in breaking down bedrock to form soil. 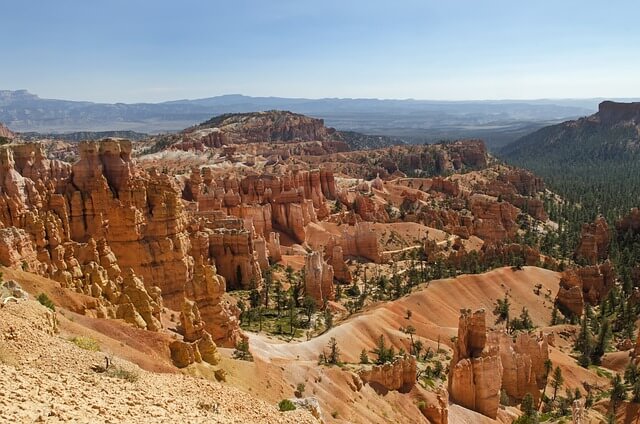 However, erosion, nnless kept in check, also destroys soils and removes them from the land. Urban development aggravates some erosional problems, as when housing projects are built on unstable soils that are subject to landslides. In addition, commercial operations such as strip mining, quarrying, and poor agricultural practices take their toll of precious soil. Consequently, soil-conservation practices are becoming increasingly important as population grows and land areas are abused on a wider scale.

Rocks are continually being worn away and land areas gradually lowered as agents of erosion attack the minerals of which the rocks are made. The fragments ‘thus produced are carried elsewhere by wind, water, ice, or other transporting agents. Most of the sediments eventually are deposited in the ocean, where they settle on the bottom to become the sedimentary rocks of the geological future.

Streams cause more erosion than ali other geological agents combined. The erosion starts when rain begins to run off the earth’s surface. The runoff at first is sometimes in the form of sheets of moving water, but such sheets usually are soon channeled into streams and rivers.

The ability of a stream to erode is governed by several factors. Thus an increase in the volume of water and in the velocity of streamflow greatly increases the rate of erosion. Streams running down steep slopes in areas that lack vegetation are especially effective erosional forces. Stream volume and velocity also determine the stream’s sediment load at a given time.

Transported rock fragments become cutting tools that widen and deepen a channel by rubbing against the channel bed. The fragments also are eroded by knocking against each other, and some rocks are slowly dissolved by the stream water as well. In addition, turbulent water may remove materials from the stream channel by a “plucking” action caused by hydraulic pressure, or by cavitatiorı, an erosive process caused by the sudden collapse of vapor bubbles against the channel wall. 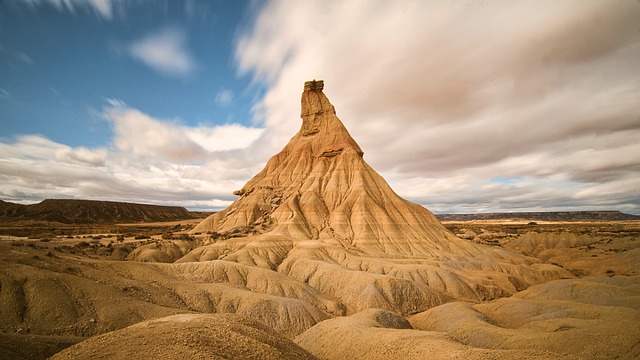 The major landforms produced by stream erosion are valleys, which may be modified from their original rather narrow, steep-walled, and V-shaped appearanee by continuing erosion and deposition. Forms such as waterfalls, rapids, potholes, meanders, and oxbow lakes may also be produced in the course of existence of a given stream or river.

Glaciation is a powerful erosional agent. As a glacier advances, the moving ice quarries pieces of material from the bedrock över which it passes. The fragments become embedded in the ice and serve as abrasive tools that further scratch and gouge the bedrock. Glaciation has produced spectacular landforms. For example, the ice sheets of past glacial periods gouged out the basins of the Great Lakes in North America. See also Glacier.

Wind erosion is more likely to occur in dry areas where soil is Ioose and unprotected by vegetation. Winds of high velocity in these areas carry a load of rock fragments that cause wind abrasion. Evidence of such abrasion is seen in ventifacts, or rock fragments with facets that have been cut and polished by the sandblasting action of windblown sediments, and in rocks undercut to form table rocks or pedestals.

Deftation is a form of erosion that occurs when loose rock partieles are blown away by the wind. Features produced by deflation include bloıvouts, or bowlshaped depressions, and desert pavement, or relatively smooth surfaces of exposed boulders, cobbles, and patches of bedrock.

Erosion by groundwater takes place just beneath the earth’s surface. Carbon dioxide from the air and decaying organic matter from the soil may combine with groundwater to form carbonic acid. Groundwater containing carbonic acid and circulating through rocks commonly removes soluble minerals and carries them away in solution. This may cause subsurface rocks to become honeycombed with caverns. Sinkholes and natural bridges may develop on the surface, forming a karst topography (named for the Karst region of Yugoslavia). In the United States such surfaces have developed in parts of Florida, Tennessee, and Kentucky.

The ocean acts as an erosional agent primarily through waves and the currents produced by waves.

Most ocean waves are generated by wind currents that agitate the water’s surface. Large waves may pound the shore with tremendous force, producing a hydraulic-lifting action that dislodges large masses of coastal rock. The blocks fail to the ocean bottom, where they undergo more erosion along with other wave-battered rock debris that has accumulated there. The sand and rock fragments grind against each other and scour the shore. In areas where the eoast is formed of soluble rocks, the ocean may also erode the rocks by dissolving their minerals. Landforms such as wave-cut cliffs, sea caves, and arehes and columns that have been produced by marine erosion are common on many coasts. 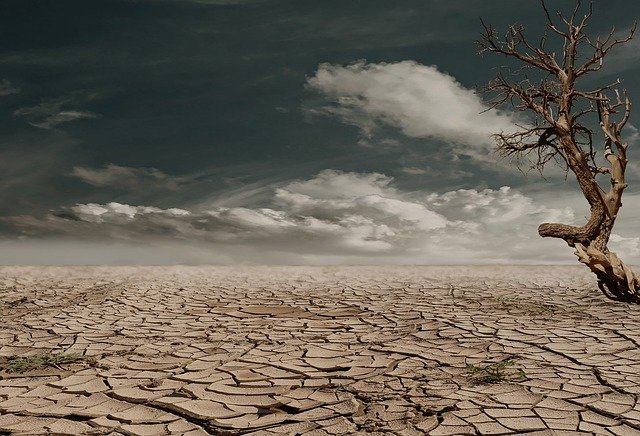 Two other important processes also serve to wear down rock: mass-wasting, which is caused by gravity, and weathering, or the breaking apart of rocks by physical and chemical means.

The earth’s gravity plays an important role in the operation of ali geological processes at the earth’s surface, but especially in that of mass-wasting—the gravity-caused movement of earth materials downslope without the aid of water, glacial ice, or any similar flowing medium. Mass-wasting is likely to occur in any area with slopes steep enough to allow the downward movement of rock debris. The ability of the slope to resist gravity depends largely on the cohesiveness of the materials of which it is composed. In addition, water may soften, lubri-cate, and add weight to an otherwise stable slope and thus help to bring about mass-wasting. Alternate periods of freezing and thawing also loosen rock materials, and the expansion of the ice that forms may physically force rocks down-slope. Undercutting by streams, as well as the earth-moving activities of men or other orga-nisms, can weaken or dislodge rocks, while shock waves produced by earthquakes, blasting, or even heavy traffie can trigger mass downward movements of rock and soil.

Slow mass-wasting is not so spectacular as more rapid gravity-induced movements such as landslides, but it is probably far more important as an erosional agent. Thus soil creep is impenr ceptibly slow, but in time it may carry massive objects with it downslope. Solifluction, a slow mass movement caused by alternate freezing and thawing, is characteristic of water-saturated soils in higher latitudes.

Even rapid mass movements are usually the result of forces that have gradually weakened a rock area över a long period of time. Thus a landslide may be triggered when earthquake waves pass through rocks previously weakened by fracturing and weathering. Slump, or slope failure, which commonly occurs along the walls of steep valleys and the banks of stream channels, is most likely to take place in unconsolidated ma-terials. It is usually caused by the undercutting or steepening of a slope to the extent that it can no longer support its own weight.

Rocks exposed on the earth’s surface are constantly attacked by the atmosphere. Disintegration, or physical weathering, occurs when rocks are reduced to smaller fragments without being changed chemically. This may be caused by frost loeaging, and expansion in cracks in the rocks. At higher altitudes weathering may be caused when rocks expand in the sun’s heat by day and contract with the cold temperatures at night, thus hastening their disintegration. 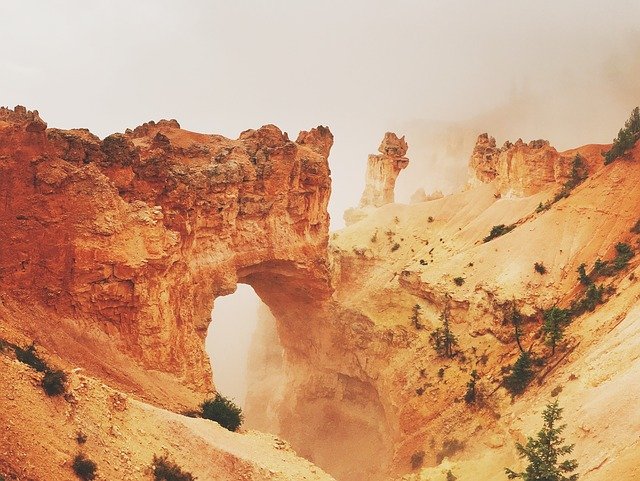 Decomposition, or chemical weathering, causes chemical changes in the minerals of a rock. The changes may destroy the original minerals and produce new ones, as when oxygen and moist air combine with minerals to form oxides, or when water unites chemically with substances in a rock.

The rate at which bedrock weathers is governed by several factors. Some rocks contain weather-resistant minerals, whereas others de-compose rapidly. Chemical weathering usually proceeds more rapidly in warm, moist climates, whereas disintegration is more apt to occur in cooler, more arid climates. Topography is impor-tant, since rock debris moves quickly on steep slopes and exposes new surfaces to weathering.