Who was Trajan? Information on the emperor Trajan biography, life story and the Roman emperor during his period. 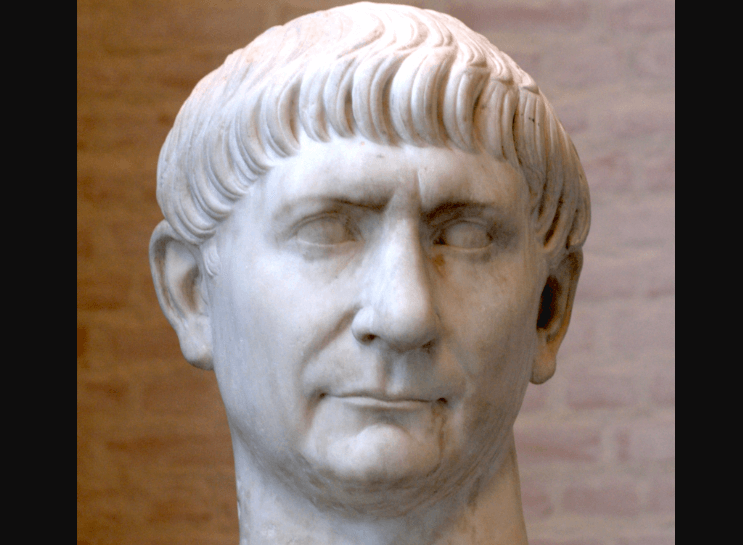 Trajan became consul in 91, and he was governor of Upper Germany in 97 when he was unexpectedly adopted by Emperor Nerva. Nerva had become emperor in 96 after Domitian’s assassination. Nerva’s position was weak because, as a civilian, he did not have the support of the Roman armies, so he adopted Trajan, a leading general. Nerva died in 98 while Trajan was still in Germany. Trajan, as the new emperor, arrived in Rome in 99 and was well received by the senators and the people. Unlike many of his predecessors Trajan ruled with moderation and respect for the senatorial aristocracy.

His reign was relatively long and also significant. He reduced taxes and increased public services. He extended Nerva’s alimenta, a public assistance program for farmers and orphans. Under Trajan’s benevolent reign Italy prospered, and Trajan became known as optimus princeps, Rome’s best ruler. Trajan showed his humane sense of responsibility in an exchange of letters with Pliny the Younger.

Trajan broke with the defensive foreign policy that Roman emperors had generally followed and became the most successfully aggressive Roman emperor. He waged wars in two areas, Dacia and Parthia.

Decebalus, the barbarian king of Dacia (roughly modern Rumania), had fought against Domitian, and in 92 the two rulers had negotiated a peace that left Decebalus firmly in control of Dacia. Trajan refused to accept this settlement of the Danubian frontier, and in 101 he made an invasion that culminated in the surrender of Decebalus in 102 and a treaty.

In 105, Decebalus broke the treaty and invaded the Roman province of Moesia. Trajan decided to destroy the Dacian kingdom, and the Second Dacian War resulted in the permanent conquest of Dacia in 107. Decebalus committed suicide, and Dacia became a Roman province. Trajan’s Column in the Forum of Trajan in Rome shows scenes from the Dacian Wars.

During the war with Parthia (113-117), Trajan annexed Armenia and made it a Roman province. To protect Armenia, Trajan decided that it was necessary to destroy Parthia, Rome’s traditional enemy along the eastern frontier. In 115 he marched down the Euphrates River, crossed to the Tigris, and took Ctesiphon, the Parthian capital. In 116, Parthians encouraged a Jewish rebellion. By 117, however, Trajan had created two new provinces, Mesopotamia and Assyria.

Trajan became ill in 117 and was returning to Rome when he died in Selinus in Cilicia about August 8. He was succeeded by his nephew Hadrian, who immediately reversed Trajan’s aggressive foreign policy in the east. Thus, Trajan’s gains were short-lived. Most modern historians agree that Trajan dangerously overextended Roman resources. Rut the Romans revered Trajan’s memory.