Emily Dickinson; (1830-1886), American poet, who is now recognized as one of the greatest poets of 19th century America. Her verse, along with that of Emerson and Whitman, best defines the distinctive qualities of the American experience.

Emily Elizabeth Dickinson, the second of three children of Edward and Emily Dickinson, was born on Dec. 10, 1830, in Amherst, Mass., and lived an outwardly uneventful life there. She was educated at Amherst Academy and spent a year (1847-1848) at nearby Mount Holyoke College, then called Mount Holyoke Female Seminary. When Emily was growing up, Amherst was a country town remote from the intellectual ferment of Boston and Concord, where Emerson was formulating his transcendental doctrines. 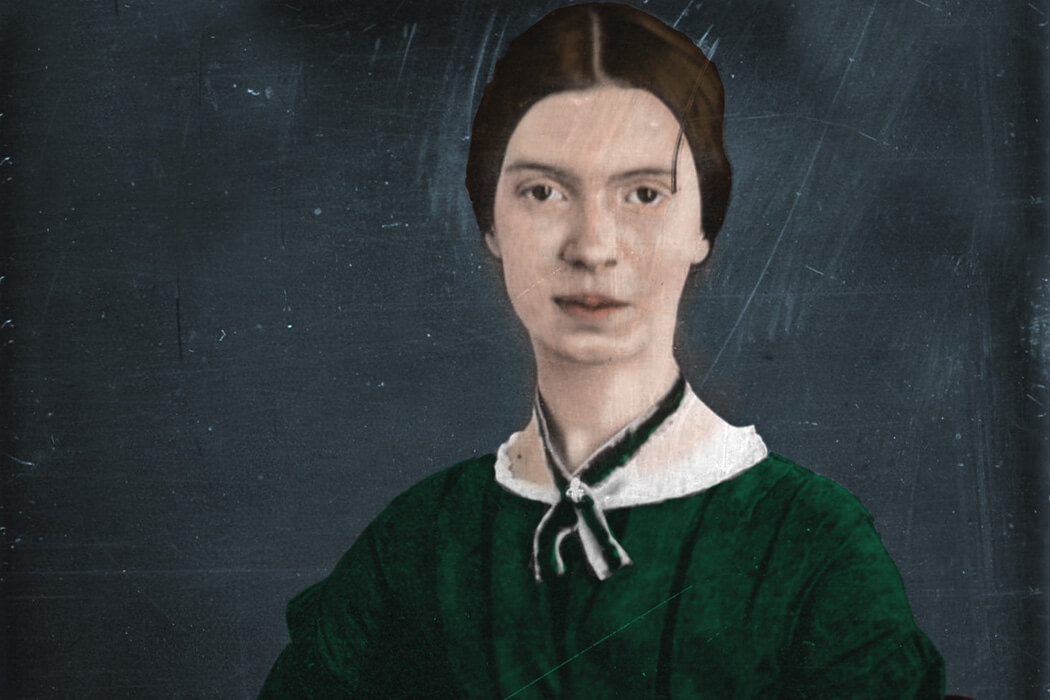 Until her maturity, there was only one church in the town, the Congregational, firmly Trinitarian and evangelical; even Amherst College (across the street from the Dickinson mansion, built by Emily’s grandfather in 1810) exhibited the religious conservatism that had long characterized towns in the Connecticut Valley. Though she was deeply moved by a religious revival during the winter of 1845-1846 and again while at Mount Holyoke in 1848, Emily found herself unable to “convert”—that is, to experience a conviction of faith and to testify to her experience before the assembled church.

Emily’s father, one of the wealthiest and most respected citizens of the town, was a leader of the church and a zealous defender of its orthodoxy against the currents of “New Thought” emanating from Concord. “Squire” Dickinson, as he was often called by humbler neighbors, saw to it that his family attended Sunday meeting, and he bought religious books for them to read. But he was unable to protect them completely from the “latest infidelity,” transcendentalism, for Ben Newton, a law student in his office, gave Emerson’s Poems to Emily for Christmas in 1850.

Thereafter she had two “fathers,” Edward Dickinson in Amherst, to whom she was tied by the strongest bonds of love and gratitude, and Ralph Waldo Emerson in Concord, her intellectual “validator,” who assured her that her religious doubts were not unreasonable and who inspired her to pursue religious intuitions that could not be fitted into Amherst’s orthodoxy. For the rest of her life she bought, read, and reread all of Emerson’s books, which inspired many of her poems.

Denied most of the comforts and satisfactions that sustain humanity, particularly love and marriage and a secure religious faith, Emily lived intensely, finding in her books, her garden, and the friends with whom she corresponded the possibilities of rich experience and fulfillment. After her father’s death in 1874, she went into the seclusion that led to her being called “the nun of Amherst.” She died there on May 15, 1886.

Over a thousand poems were discovered in Emily Dickinson’s bureau after her death. In all, she wrote nearly 1,800 poems, several hundred of which are among the finest ever written by any American poet. She gave only 24 of the poems titles, and only seven were printed during her lifetime.

The earliest surviving verse by the poet’s hand was embroidered on a sampler when she was 15. Its interest lies chiefly in its relation to her later religious development. It begins “Jesus Permit Thy Gracious Name to stand/ As the First efforts of an infants hand” and ends with the prayer that He may write His name upon her heart. Many of her late religious poems treat Jesus, whom her father called the divine Son of God, as an avatar and validator who taught the difficulty and necessity of faith and “endorsed the sheen” of life. They suggest that in the end, after all her doubts, His name was written on her heart.

Emily Dickinson’s earliest surviving poem (written in 1852) is a comic valentine that exhibits the wit that would later be so prominent a feature of her mature verse. In verse form, too, it foreshadows her mature work, being written in a variation of one of the hymn forms described and illustrated in Isaac Watts’ Christian Psalmody and in Psalms, Hymns, and Spiritual Songs, 19th century editions of which were used for congregational singing in her church and copies of which were also in her father’s library Of the several variations of this meter, the most frequently used, “the common meter,” which the poet chose for most of her work, is the same as that-of most of the older folk ballads, the nursery rhymes, and modern jingles. Like Emerson before her, but more consistently, she chose the most “nonliterary” form available for the majority of her poems. For the rest, she chose one of the traditional variations. Often she denied church doctrine in the form the church had chosen as its vehicle for teaching it:

We hated Death and hated Life
And nowhere was to go
Than Sea and continent there is
A larger—it is Woe.

Emily’s most creative period, from 1858 to 1862, ended with her “nervous breakdown.” After this, she composed less often but not less well; some of her latest poems are among her greatest; for example, A Route of Evanescence, How Brittle Are the Piers, and The Road Was Lit with Moon and Star.

Apart from the occasional verse and the small number of pure love poems, about which there has been too much fruitless speculation concerning who was meant, her single complex subject was the self and its ultimate destiny. Having failed, despite the religious revivals, to find the comfort of her father’s faith, she settled for a while for Emerson’s. But then Emerson, though he continued to be valued as a spiritual guide, came to seem to her not to have taken sufficient account of the fact of suffering. After this she carried on a running debate with both her “fathers” on the possibility of any valid faith, Christian or transcendental.

Emily Dickinson sometimes anticipated the naturalism characteristic of the 20th century. She epitomized the history of American religious development—from Jonathan Edwards to Emerson and then to Wallace Stevens, Conrad Aiken, Robinson Jeffers, and other naturalistic poets who came to maturity in the 1920’s. 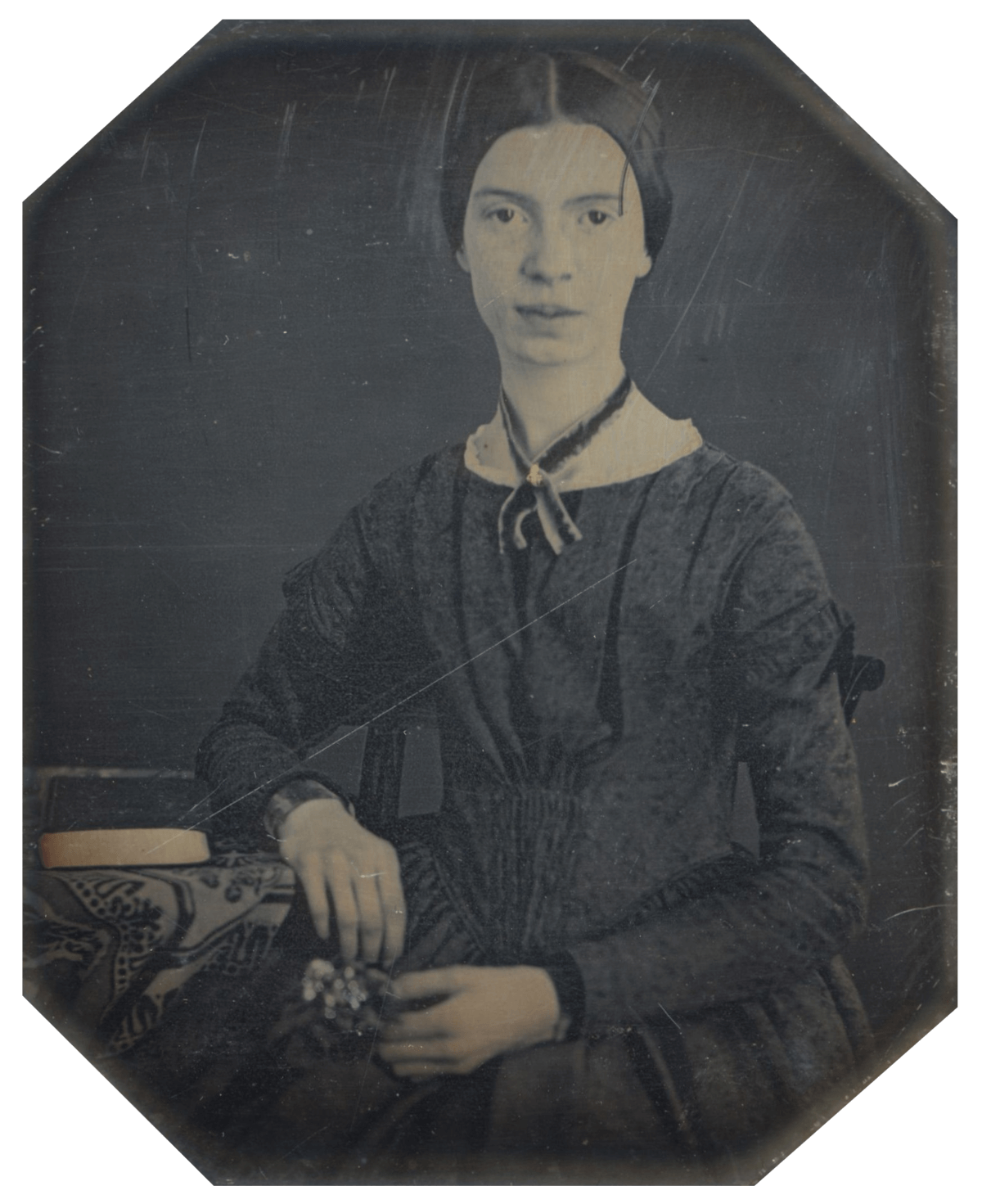 Important to the poet’s development was a series of men that Emily often called her “mentors.” Ben Newton, who introduced her to Emerson, was the first of these and was never forgotten after his early death. Her next mentor was the Rev. Charles Wadsworth, who was pastor of a Philadelphia church when she met him. In 1862, when he moved to California and she could never expect to see him again, she suffered the first of her several emotional crises. After her recovery that same year she solicited advice from Thomas Wentworth Higginson, a clergyman and author living in Cambridge, Mass., with whom she corresponded regularly for some 20 years and who meant less to her personally but was still a resource in time of need. After her father’s death she turned to an old family friend, Judge Otis Lord, not, as with Higginson, for advice about poetry (advice she never took) but for consolation. After the death of Lord’s wife, she allowed affectionate respect for him to develop into love, and considered marriage, but then he died too, and there were no more men, or mentors either, in her life.

Emily Dickinson’s poetry exhibits four primary influences, if we count as one influence the Bible and the Protestant hymns— which retold the Biblical story, usually in Biblical images, and gave her her meter. Next come Shakespeare, Emerson, and Hawthorne. Of these four, the Bible and Emerson were crucial to her; without them her poetry would have been entirely different or, more likely, would not have been written at all. Shakespeare was for her, as for most of her contemporaries, a linguistic and imagistic resource. Hawthorne she might have done without, though we should not then have had some of her finest poems, among them I Heard a Fly Buzz—When I Died, which takes off from the “Governor Pyncheon” chapter in The House of Seven Gables.

Some four years after Emily’s death, Mabel Loomis Todd, a friend and neighbor whose aid Emily’s sister Lavinia had enlisted, managed to persuade Higginson, who had publishing connections, to join her in editing and “correcting” a selection of the poems. Thereafter, friends and relatives continued to publish additional edited selections from the manuscripts until, in 1955, Thomas H. Johnson published a complete, 3-volume edition, including variant readings, of the poems as the poet had written them.