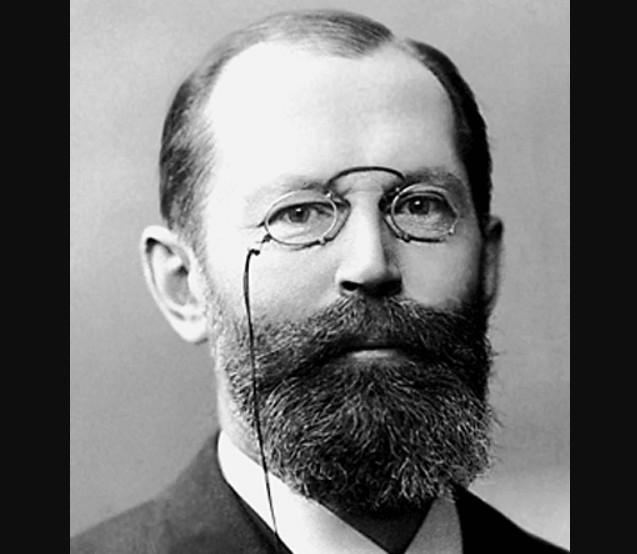 Emil Fischer was born in Euskirchen, Rhenish Prussia, on Oct. 9, 1852. He went to the University of Bonn, where he heard the lectures of the German chemist Friedrich August Kekule, one of the early leaders in the study of structural organic chemistry. In 1872, Fischer went to Strasbourg to study with Johann F. W. A. Baeyer; he received his Ph. D. for work on dyes in 1874. In 1875 he followed Baeyer to Munich. Fischer subsequently held chairs at Erlangen (1882), Wiirzburg (1885), and Berlin (1892). When World War I broke out in 1914, he was the leading German chemist, and he was made responsible for organizing the production of chemicals. Fischer became depressed over the loss of three sons in the war, and on July 15, 1919, he committed suicide.

In 1875, Fischer discovered the compound phenylhydrazine, which is a substance that combines with simple sugars to form easily identifiable derivatives. Using these derivatives, he was able to elucidate the molecular structures of sugars and also to synthesize some sugars. Baeyer had done studies on uric acid. Fischer became interested in this research and worked out the structures of caffeine and theobromine; he showed that these compounds, as well as uric acid, are derivatives of a single compound, which he called purine, which is a nitrogeneous base. Fischer and his associates eventually synthesized a large number of purine derivatives, including adenine and guanine, which are found in nucleic acids.

In further research on sugars, Fischer worked mainly on 6-carbon sugars, such as glucose. In this work he found that there are 16 possible stereoisomers for the glucose formula. He found that the structure of the sugar is responsible for determining the direction in which a solution of the sugar rotates a beam of plane-polarized light. Fischer also discovered that there are two series of sugars that are mirror images of each other. These are the D sugars and the L sugars. For unknown reasons, only D sugars occur in nature. Fischer’s determinations of the structures of sugars and his system for writing sugar structures were of basic importance in the development of organic chemistry.

Sometime before he received the Nobel Prize, Fischer began a series of studies of proteins. At that time it was known that proteins are made up of amino acids, and Fischer found various methods of purifying amino acids by precipitation. He studied the type linkage between the amino acids in a protein and then proceeded to synthesize some proteinlike substances. He eventually succeeded in synthesizing a polypeptide containing 18 amino acids; this substance was broken down by enzymes in the same manner as a natural protein.

Fischer was also interested in the manner in which enzymes break down sugars. He attributed the efficiency of the enzymes to the shape of their molecules, which he believed must fit into the sugar molecule like a key into a lock.